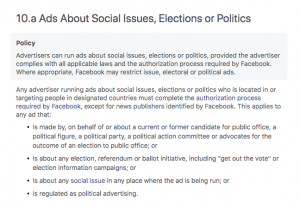 In 2018, Maryland passed the “Online Electioneering Transparency and Accountability Act”. The act broadened the reach of Maryland’s  political advertising rules to cover online advertisements and “online platforms”. It required publishers to publish somewhere on their sites the following information regarding the purchasers of political ads: (1) the purchaser’s identity, (2) the amount paid, and (3) any individuals who control the purchaser. Publishers must keep this information for a year following the election. The records must be made available upon request. According to the court, these requirements “attach” when a buyer notifies a publisher that it is buying a “qualified paid digital communication” and supplies the publisher with the necessary information.

The act took effect without the signature of governor Larry Hogan, who flagged “serious constitutional concerns” regarding the statute.

Various news outlets, including the Washington Post, brought suit in federal court and sought an injunction. The district court granted the injunction. The Fourth Circuit affirms.

The court starts by saying the regulation is content-based and subject to heightened scrutiny. Further, the statute singles out political speech, which strikes at the heart of the First Amendment. Finally, the statute compels speech, and does so in a way that “implicates protections for anonymous speech.”

The court says that campaign finance laws address legitimate concerns regarding the election process, but the fact that the statute targets intermediaries poses its own problems. While regulations targeting actual participants or speakers and requiring them to disclose information regarding their own activities may in theory be acceptable, the fact that the regulation targets intermediaries has a chilling effect on those platforms. Rather than deal with the hassles with compliance, they may simply decline to host political ads altogether. “Google, for instance, has already stopped hosting political advertisements in the state.” (The court also footnotes that Twitter announced a decision to voluntarily ban political advertisements.)

The fact that the statute regulates newspapers and mandates certain content makes it particularly troubling to the court. The statute “intrudes into the function of editors.” This is so, because “the very choice of material to go into a newspaper garners independent constitutional protection, even if publishers ‘would not be forced to forgo publication of news or opinion.’”

Maryland argued that the statute only applies to ads that platforms voluntarily choose to accept, but the court says the First Amendment does not tolerate forcing speakers to take the good with the bad. The court is highly concerned about the prospect of the state micromanaging the newsroom:

With its foot now in the door, Maryland has offered no rationale for where these incursions might end. Today the state asks for information about the targeted audience; tomorrow perhaps the names and addresses of all officers of corporate affiliates of the ad purchase; the day after the identities of donors to those purchasers.

The court rejects Maryland’s argument that these rules are akin to rules upheld in the broadcasting context. The court says that the “broadcast industry” has always been treated as a unique species for First Amendment purposes. Further, compelling broadcasters to carry certain content is not the same as “altering the content of a news product.”

The court declines to choose the level of applicable scrutiny but says the statute fails both strict and the more lenient exacting scrutiny.

The court notes the statute does not effectively target foreign interference, which was the rationale for the law in the first place. Foreign interference was actually effected through unpaid posts on social media, rather than via paid political advertising. A law regulating paid political advertising would not capture the bulk of foreign interference. Further, much of the foreign advertisements are merely broadly political in tone—i.e., they focused on “rousing passions” rather than supporting a specific candidate or initiative. Thus, they would not be covered by the statute. The statute is under-inclusive.

The act is also too narrow in some respects (and too broad at the same time). It targets the press, which the court is particularly sensitive to, but the State did not offer much evidence that foreign interference occurred through typical “news outlets”. Second, the statute fails to differentiate between “large and small” platforms. It covers any site that has 100,000 or more monthly unique visitors or users. The law “kicks in no matter how susceptible a website may be to foreign meddling or how influential it has been to a given election cycle.”

Maryland offered an argument that this was the best it could do in terms of fit, but the court is not persuaded: “Maryland has failed to provide sufficient evidence to justify painting with such a broad brush.” The court notes that the “clear bulk of foreign meddling took place” via the big platforms (Facebook, Instagram, etc.). However, the statute applies to sites of all different sizes and reaches.

The court closes by paying respect to the states’ task in promoting transparency and rooting out corruption, but says here Maryland simply went too far.

This is a powerful First Amendment ruling that tackles topical and divisive issues. It shows the influence of the Supreme Court’s recent rulings on content-based distinctions and compelled speech. On the other hand, it relies on a lot of well-worn First Amendment precedent. It’s a good question as to whether the court would have reached this result 15 years ago or whether the newer cases change the outcome. There was a range of amici who submitted briefs, largely favoring the publishers. (The Brennan Center filed a brief against the publishers arguing that heightened scrutiny is not appropriate when media companies “are not engaging in traditional press activities“.) Perhaps this is not the end of the road for this case?

The opinion reads a lot like a Section 230 ruling, in focusing on any regulation that intrudes on a site’s editorial function and imposes additional obligations on a site to police the content submitted by third parties. The media companies raised a Section 230 argument in the trial court, but the trial court focused on the First Amendment issue and resolved it on that basis. I wonder whether that’s a result of the court being guided to the argument the parties focused on or whether the court felt that the First Amendment was a better choice. Perhaps the court wanted to avoid bringing undue attention to Section 230, which (as Eric has cataloged extensively) is under attack? (Cf. Eric’s paper comparing the First Amendment to Section 230, and arguing that the latter provides more substantive and procedural benefits than the First Amendment.) The two cases raise in differing factual and legal scenarios, but it’s worth contrasting the court’s reluctance here to endorse a rule requiring publishers to publish certain content in order to comply with the law, to the Ninth Circuit’s willingness in the Model Mayhem case to adopt such a rule in requiring a duty to warn.

Maryland is not alone in regulating online political advertising. Washington had skirmishes with both Google and Facebook that resulted in those sites declining to run political ads in Washington State. Several articles have argued that the sites’ implementation of these bans were uneven at best, resulting in a worse situation than if the bans were not implemented. See, e.g., “Facebook’s political ad ban created a disaster in Washington state”.

The statute’s choice to cover sites that reach 100,000 “monthly unique visitors” feels arbitrary. I am sympathetic to the challenge faced by state legislators. I have no idea how to go about drawing a line that is based on size or reach of a particular site. It would be interesting to survey these types of standards as they appear in state or local statutes and how they have changed over time.

Judge Wilkinson wrote this opinion. He also authored Zeran v. AOL. See more about Judge Wilkinson’s journalistic background in this essay by Jeff Kosseff (page 39 of the PDF). This may explain why Venkat saw parallels to the Section 230 analysis!

This is a powerful line: “Maryland’s law is a compendium of traditional First Amendment infirmities.”

This opinion has interesting implications for mandatory transparency reports from online entities. Regulators have been embracing mandatory transparency disclosures from online entities in a variety of formats, ranging from Germany’s NetzDG to the new mandatory disclosures in the CCPA regulations. This case signals that those obligations may run afoul of the First Amendment. The opinion emphasizes how Maryland’s law applied to political speech and burdened journalistic operations, but online mandatory transparency reports will pick up political speech and burden journalistic operations directly or indirectly. I will consider these issues in my next big paper, currently entitled “Validating Transparency Reports.”

I didn’t raise it in my CCPA regulations comments, but now I wonder if the mandatory transparency reports proposed in the draft would survive constitutional scrutiny. Anyone working on that issue in the California DOJ should take a long, hard look at this opinion.

New Paper: “Why Section 230 Is Better Than the First Amendment”