May 7, 2019 · by Eric Goldman · in Content Regulation, Derivative Liability, E-Commerce

In 2018, the Wisconsin Court of Appeals issued a bizarre opinion suggesting that plaintiffs could avoid Section 230 by targeting the service’s design and operation. The authoring judge seemed confident that he had spotted a statutory interpretation flaw that hundreds of other judges had overlooked. He hadn’t. The case was appealed to the Wisconsin Supreme Court, which corrected the appellate court’s mistake and restored sanity to Wisconsin’s Section 230 jurisprudence. 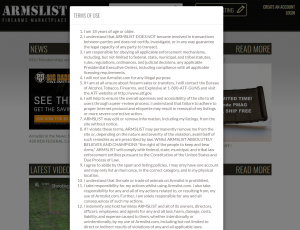 The case involves Armslist, an online classified ads service for guns. A shooter, Haughton, bought a gun via Armslist from a private seller, which bypassed any legally required background checks. The shooter was subject to a restraining order that prohibited him from owning guns. He used the Armslist-acquired gun to kill four people, including himself and the person protected by the restraining order, and injure four others.

The estate sued Armslist for negligence and more. Everyone agrees that the gun seller created the ad in question. The plaintiff argued that Armslist partially developed the ad. Among other allegations, the plaintiff claimed there were:

Armslist defended on Section 230 grounds. The circuit court agreed with Armslist. The appeals court reversed. The Supreme Court ruled for Armslist in a straightforward, but highly defense-favorable, opinion.

The court relies on the Roommates.com “neutral tools” standard, as clarified by Goddard v. Google:

The concept of “neutral tools” provides a helpful analytical framework for figuring out whether a website’s design features materially contribute to the unlawfulness of third-party content. A “neutral tool” in the CDA context is a feature provided by an interactive computer service provider that can “be utilized for proper or improper purposes.” A defendant who provides a neutral tool that is subsequently used by a third party to create unlawful content will generally not be considered to have contributed to the content’s unlawfulness.

Examples of such neutral tools include a blank text box for users to describe what they are looking for in a roommate, [Roommates], a rating system that allows consumers to award businesses between one and five stars and write reviews [Kimzey], and a social media website that allows groups to create profile pages and invite members. [Klayman] All of these features can be used for lawful purposes, so the CDA immunizes interactive computer service providers from liability when these neutral tools are used for unlawful purposes.

This is true even when an interactive computer service provider knows, or should know, that its neutral tools are being used for illegal purposes….

The “neutral tools” concept is an oxymoron. Tools are never neutral; they always reflect biases and prioritize some outcomes over others. As a result, the “neutral tools” legal standard makes it easy for judges to deem tools “non-neutral” in ways that could undermine Section 230. Fortunately, the Goddard case helpfully framed the definition of “neutral tools”: a tool isn’t neutral only when it has the singular purpose of being used for illegal activity. Very few tools should satisfy that standard.

The plaintiff claimed “Armslist should have known, actually knew, or even intended that its website would facilitate illegal firearm sales to dangerous persons.” The court responds:

One obvious problem with Daniel’s argument is that § 230(c)(1) contains no good faith requirement. Therefore, the issue is not whether Armslist knew, or should have known, that its site would be used by third parties for illegal purposes. Instead, the issue is whether Armslist was an information content provider with respect to Linn’s advertisement. Armslist.com’s provision of an advertising forum and the related search functions are all “neutral tools” that can be used for lawful purposes. Sales of firearms by private sellers are lawful in Wisconsin. Further, private sellers in Wisconsin are not required to conduct background checks, and private sales are not subject to any mandatory waiting period. Accordingly, the option to search for offers from private sellers is a tool that may be used for lawful purposes.

The remainder of the design features referenced in Daniel’s complaint——lack of a “flag” option for illegal activity, failing to require users to create an account, failure to create restrictions on who may post or view advertisements, and failing to provide sufficient legal guidance to sellers——are voluntary precautions that the CDA permits but does not require. Whether or not Armslist knew illegal content was being posted on its site, it did not materially contribute to the content’s illegality.

This is powerful stuff. The court reinforces that scienter is irrelevant to Section 230(c)(1). As a result, a defendant can win a motion to dismiss even when a plaintiff alleges that the defendant knew about–or intended–the allegedly illegal content. To emphasize this point, the court cites Doe v. Backpage: “the allegation of intent is ‘a distinction without a difference’ and does not affect CDA immunity…allowing plaintiffs to escape the CDA by arguing that an interactive computer service provider intended its neutral tools to be used for unlawful purposes would significantly diminish the protections offered by § 230(c)(1).” As I note in my paper, Why Section 230 is Better Than the First Amendment, this statutory mooting of scienter allegations distinguishes Section 230 from First Amendment constitutional doctrines.

Similarly, the court emphasizes that Section 230(c)(1) doesn’t have a good faith requirement, in contradistinction to Section 230(c)(2). This is a prime reason why defendants can win a 230(c)(1) motion to dismiss but may not be able to win a parallel 230(c)(2) motion.

More generally, this case adds to the growing precedent that plaintiffs can’t get around 230(c)(1) by alleging defective website design. The First Circuit and Second Circuit emphatically rejected such workarounds in the Doe v. Backpage and Herrick v. Grindr rulings, respectively. This court extends that jurisprudence.

Along the way, the court denigrates the 2015 JS v. Village Voice ruling from the Washington Supreme Court, which rejected Backpage’s motion to dismiss. The court calls the JS ruling “unpersuasive” for two reasons: (1) Washington’s pleading standards are laxer than Wisconsin’s, and (2) “the Washington Supreme Court ignored the text of the CDA, and the overwhelming majority of cases interpreting it, by inserting an intent exception into § 230(c)(1).”

The court summarizes the negligence claim:

Daniel’s negligence claim is simply another way of claiming that Armslist is liable for publishing third-party firearm advertisements and for failing to properly screen who may access this content. The complaint alleges that Armslist breached its duty of care by designing a website that could be used to facilitate illegal sales, failing to provide proper legal guidance to users, and failing to adequately screen unlawful content. Restated, it alleges that Armslist provided an online forum for third-party content and failed to adequately monitor that content. The duty Armslist is alleged to have violated derives from its role as a publisher of firearm advertisements. This is precisely the type of claim that is prohibited by § 230(c)(1), no matter how artfully pled.

That Armslist may have known that its site could facilitate illegal gun sales does not change the result. Because § 230(c)(1) contains no good faith requirement, courts do not allow allegations of intent or knowledge to defeat a motion to dismiss. Regardless of Armslist’s knowledge or intent, the relevant question is whether Daniel’s claim necessarily requires Armslist to be treated as the publisher or speaker of third-party content. Because it does, the negligence claim must be dismissed.

One judge dissented, saying “the design itself is the creation of content.” This is supported by an odd footnote: “Examples of design content are ubiquitous. One need look no further than the design content of algorithms, used to influence everything from where we shop to the sentencing of criminals. The parameters of ‘content’ extend beyond simply words on a page.” I’m not really sure what the dissent was trying to say with this riff on the definition of “content.” Citing Roommates.com and JS, the dissent says that Armslist should be accountable for its design choices.