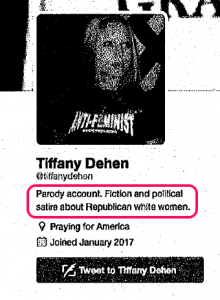 Tiffany Dehen is a 2016 alumna of University of San Diego’s law school. Her website declares that she is “a true American and Patriotic Trump Supporter,” and her photo album includes a photo of her smiling with Dinesh D’Souza. She claims that an unidentified person created a “parody” Twitter account that used her photo and posted objectionable content. She reported the account to Twitter and, after a few days, the account was disabled. You can read more about her motivations for filing this lawsuit in an Above the Law interview. Dehen sued several defendants; I’ll focus on Twitter’s liability.

Dehen’s allegations create an easy Section 230 defense. The court says “Twitter is an interactive computer service, and the offending content— the tweets —was posted by another information content provider, John Doe.” The only remaining issue is whether Dehen’s allegations treat Twitter as the publisher/speaker of the account. Dehen argued that her lawsuit was based on Twitter’s delayed removal instead of the account’s content; plus Twitter’s response to the removal request allegedly breached its TOS, giving rise to a breach of contract claim. Of course, Twitter’s TOS reserves its discretion to remove content. The court summarily concludes that “Twitter complied with its own monitoring policies and removed the offending account in a matter of days. Without a breach of contract, Twitter’s decision to remove the content, and the speed at which it did so, is publisher conduct that satisfies the second prong of the CDA.”

As a result, the court dismissed the claims against Twitter and will tax costs against her. On the plus side, Twitter brought a motion to dismiss rather than an anti-SLAPP motion to strike, so Dehen may avoid paying Twitter’s legal fees.

This case reminded me of two other cases. First, Franco Caraccioli’s lawsuit against Facebook analogously involved a negative social media account targeting a San Diego law student that took longer than expected to be removed. Is something going on in San Diego? Like Caraccioli, Dehen’s lawsuit met a quick Section 230 dismissal, and attempts to use a breach-of-contract workaround failed. Second, the case reminds me of the seminal Zeran v. AOL case, which also involved the allegedly slow removal of attack impersonation accounts. In that case, Zeran tried to frame AOL’s (allegedly) slow removal of the accounts as negligence, but it also didn’t change the Section 230 outcome.

Two other thoughts about the case. First, I consider this lawsuit as part of a broader upswell in litigation related to Trump. Say what you will about Trump, at least he’s been great at spurring litigation. Yay for the Trump Bump in our industry! #MALGA. Second, Dehen is a self-labeled “conservative,” and I remain fascinated by how many “conservatives” are bringing Internet law-related suits predicated on legal *regulations* that historically conservatives bitterly fought to prevent or circumscribe. I’m especially baffled by how many conservatives believe that private Internet companies are engaged in discriminatory viewpoint-based censorship against them and are advocating for additional regulations to circumscribe the Internet companies’ First Amendment-protected rights to free speech and free press. I’m not sure if that’s Dehen’s position–check this page and form your own opinion–but my eyes started tearing up when I saw she uses the hashtag #EndtheCDA and #EndCDA230 on her Facebook page. 🙁