May 5, 2015 · by Eric Goldman · in Content Regulation, Derivative Liability 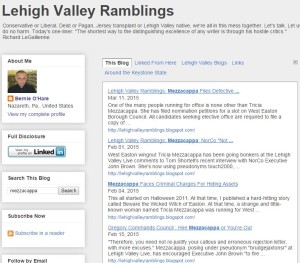 In general, bloggers aren’t liable for reader comments per Section 230. See generally my 2011 recap of Section 230 and message boards. The Pennsylvania law is particularly defense-favorable, including the cited D’Alonzo and Supplementmarket cases plus the Third Circuit’s DiMeo v. Max case. The court also references the New Jersey state court Donato case from 2005.

In this case, the court says the blog an interactive computer service, Mezzacapp’s claims of defamation and privacy invasion are publisher/speaker claims, and “it was apparent” that the anonymous comments came from third parties. For reasons that aren’t explained, the court doesn’t discuss the obvious possibility that some of the comments could have been anonymously posted by O’Hare himself. Mezzacappa weakly argued that O’Hare “exclusively controlled” the blog comments by deleting some comments, so O’Hare approved the remaining comments. The court swats that argument away citing Donato and DiMeo. Thus, the court dismisses all of the claims based on the anonymous comments.