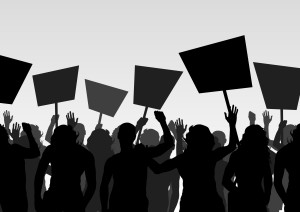 This case relates to a bus drivers’ strike in 2012. During the strike, union members posted “impassioned and bellicose” comments about the strike on the union’s Facebook page, which was accessible only to union members. The union didn’t authorize those comments.

Weigand was an employee of the bus company. He was covered by the union’s collective bargaining agreement but was not a union member. He claimed the Facebook comments by union members coerced his exercise of “Section 7” rights to decide whether or not to cross the picket line. He claimed this constituted an “unfair labor practice” and filed a complaint with the NLRB.

The DC Circuit held that the union isn’t responsible for the Facebook posts made by individual union members. The applicable statute governs only “a labor organization or its agents.” The posts weren’t by the “labor organization,” and the members who posted weren’t the union’s “agents.”

A line of cases required unions to publicly disavow rogue statements by their members, but the court says this requirement only applies to statements made at the physical-space picket line, not online fora. The court endorses the explanation provided by an earlier opinion in the case:

a picket line makes visible in geographic space the confrontation between the two sides. In contrast, Respondent’s Facebook page does not serve to communicate a message to the public. To the contrary, it is private. Moreover, it does not draw any line in the sand or on the sidewalk. Unlike a website in cyberspace, an actual picket line confronts employees reporting for work with a stark and unavoidable choice: To cross or not to cross.

As the court further summarizes:

a picket line—unlike a private Facebook page—is a “highly visible” signal to the public and all employees of a dispute with the employer and the “coercive effect” of a threat made on a picket line is “immediate and unattenuated.”

The court doesn’t provide any supporting citations, but it’s dealing with a venerable and well-explored Internet Law exceptionalism topic. Are conversations on the Internet are different from offline conversations? Yes, for several reasons, including the potential threat of immediate violence between conversationalists and the social opprobrium (such as watchful eyes and hostile stares) that can attach when community members observe and respond to another person’s decision to enter or exit a physical space (a point I stress when I teach Noah v. AOL as my introduction to Internet exceptionalism in my Internet Law course). Because of the different implications on both fronts, I think the court rightly distinguished “bellicose” Facebook posts from remarks being shared at a picket line.

The court also rejects Weigand’s catch-all “but the union ran the forum…!” argument:

Remarkably, the court rules for the union without relying on Section 230:

in adopting the ALJ’s finding that the Union “did not violate the Act by failing to remove certain comments from its Facebook page,” the Board found it “unnecessary to rely on the [ALJ’s] application of the Communications Decency Act, 47 U.S.C. § 230” (“CDA”). Amalgamated Transit Union, 360 N.L.R.B. No. 44, slip op. at 1 n. 1. Weigand argues that “[t]he Board erred in refusing to consider and reverse the ALJ’s holding that the Union is not liable under the CDA for posting threats on its Facebook page.” In resolving this case, the Board properly applied the applicable law under the NLRA. Therefore, we agree with Board counsel that the Board “did not need to analyze the CDA as an additional defense for the Union, let alone consider Weigand’s unsupported assertion that the CDA somehow constitutes an affirmative cause of action necessary to the Board’s analysis.”

This is one of the rare cases that provides insights into what the law might have looked like without Section 230’s immunity. In this case, the statute is narrowly drafted, so perhaps its lessons aren’t generalizable. Then again, we’ve had a few nice defense wins in cases where the court didn’t apply Section 230 but the facts were squarely in Section 230’s scope. Examples that come to mind include the old Lunney case as well as the more recent Armslist case.

This ruling follows the uncited ruling in Ricci v. Teamsters Union Local 456, 781 F.3d 25 (2d Cir. March 18, 2015), another union-related case that gave us the Second Circuit’s first Section 230 ruling (and a favorable one at that). We have many reasons to give thanks to unions, and I’ll add to the list their recent beneficial contributions to federal appeals courts’ interpretations of Internet Law.