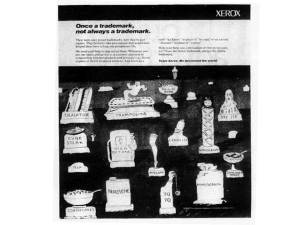 Don’t make a tombstone for Google yet

The “Google” trademark regularly ranks as one of the most valuable trademarks in the world. In 2011, Forbes estimated the trademark’s value at $44B, and a more recent estimate placed the value at $113B. Almost certainly, the “Google” trademark is Google’s single most valuable asset. Recently, Google’s opponents in a court case claimed the trademark had become “generic,” so everyone could freely use it without restriction. Fortunately for Google, the court decisively rejected the challenge, confirming that “Google” remains a valid and protectable trademark.

Trademarks protect a word or logo’s ability to identify the associated product’s source. When a product’s name or logo becomes associated with its class of goods, instead of one specific product in the class of goods, we say that the word or logo has become “generic” and has permanently lost all trademark protection. Over the years, many great trademarks have become generic, such as escalator, aspirin and yo-yo. (Xerox and Kleenex are two trademarks that are probably still protected but have been teetering on the cusp of genericism for years).

Google’s opponents contended that “the GOOGLE mark has become generic because a majority of the public understands the word google, when used as a verb, to mean the indiscriminate act of searching on the internet without regard to the search engine used.” The court identifies two major problems with this assertion.

Second, the opponents’ evidence about consumers’ understanding wasn’t very good. The opponents’ lawyer did his own consumer survey, which the court completely disregards as unscientific. The lawyer also hired a survey expert, but his survey was poorly constructed and Google’s lawyers eviscerated the report in cross-examination and rebuttal. Meanwhile, Google introduced its own consumer survey showing 94% of consumers identified Google as a brand name and only 5% identified it as a common word.

The courts say that even if Google’s opponents proved that a majority of consumers understand definition #3 (Google as a verb for Internet searching), Google showed 90%+ of consumers understand definition #1 (Google designates its own search engine), so the term Google still functions as a source designator. As the court concludes, the “undisputed evidence is that the consuming public overwhelmingly understands the word google to identify a particular search engine, not to describe search engines in general.”

When they first launch, many Internet entrepreneurs dream of a day when their service’s trademark becomes generic. After all, that means they’ve reached the big-time, where everyone knows the service’s name and thinks of that name first. The reality is that trademark genericide means the company loses control over the name; it can’t suppress spammers, third party developers or competitors from doing whatever they want with the name. Usually, starry-eyed entrepreneurs eventually wake up and realize that genericism of their trademark is worth fighting against. The lawyers hope that epiphany doesn’t come too late.

In contrast, Google has known for a long time that its dominating success created a risk that its trademark would become generic. Thus, Google has proactively tried to avoid that outcome, including convincing dictionary authors to treat the term “Google” as a trademark, not a generic noun or verb. Indeed, Google’s opponents asserted that Google “intimidated” dictionary authors, but to no avail.