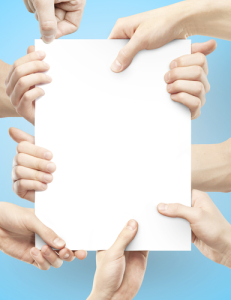 The litigants discussed working together to launch a new product in the marketplace. As seems to be inevitable in situations like this, the parties’ relationship fell out. Trying to salvage something from the situation, Turner alleged the parties had formed a joint venture. As supporting evidence for the joint venture agreement, Turner pointed to conversations between the parties in a jointly edited “blog,” although what made it a “blog” wasn’t clarified in the opinion. Instead, it sounds a lot more like a shared Google document or similar jointly editable document. Either way, the court says that the “blog” evidence is insufficient to show that a contract formed (citations omitted):

Turner argues that a blog edited by herself, Benjamin, and Roger Braimon constituted a binding joint venture agreement. Turner testified that this blog–an “editable” working document that was “constantly changing and modifying”–contained the terms of their oral partnership agreement and “served as a living document for [them] to write, edit, and memorialize [their] discussions.”…

Although the parties’ blog contained a number of possible contract terms, Turner admitted at her deposition that many of these had not been finalized, indeed, several of them were marked “to be determined.” Turner also acknowledged her understanding that the alleged agreement was not finalized as late as April 2007, when “still some discussion [ ] needed to take place with respect to the contents of [their] contract.” Also in April, Braimon sent an e-mail to a lawyer, stating that the parties had yet to “establish a contract” and were still “undecided” even on the “actual product” they would develop together. Perhaps most telling is that, when asked at her deposition if the parties had ever finalized their agreement, Turner responded, “No. I would have loved to.” Given this record, no reasonable jury could find that the parties manifested the requisite intent to enter into a binding partnership agreement.

Whether it’s a blog or a Google doc, there’s no reason why a jointly editable document couldn’t be used to form a contract even if there’s no magic moment when ink hits paper. The freely editable nature of the document might raise questions about which version was “final” and if the evidence can be properly authenticated. On the other hand, if the document provides a revision history allowing for the parties to easily trace the what/when of each iteration in the conversation, it might actually be more evidentiarily reliable than a string of emails or other types of parol evidence.