Last Thursday, I participated in the 7th Annual EFF Pub Trivia Night at Bluxome Street Winery in SOMA. My photo album. The EFF’s Kurt Opsahl was our Master of Ceremonies (in a smoking jacket, no less) and main question-writer.

Several technology organizations fielded teams, including Wikipedia, Google and Twitter (with the great name “A Flock of Legals,” though I didn’t see any team members with the hair-do). The EFF interns also had a team that reached an impressive 4th place finish.

Even with this strong competition, expectations were especially high for two teams:

(1) a team of Durie Tangri lawyers (with a team name so long and confusing that I didn’t catch it), anchored by Stanford Law Professor Mark Lemley. Let’s be honest: is there anyone in our community more feared in trivia contests than Mark Lemley? Indeed, after his domination of a prior pub trivia night, for a few years the EFF banned ALL law professors from being on trivia teams, in what is only somewhat affectionately called the “anti-Mark Lemley rule.” But the team wasn’t just a one-trick pony, with depth coming from well-known Big Brains such as Michael Page and Joe Gratz.

[Update: I’ve been told the team name was “The Innocence of Tiny Antennas,” but that name apparently got butchered throughout the night.] 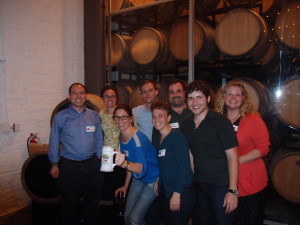 Just like law school gunners who sit in the front row of class, Team Durie Tangri and Team Heartbleeders occupied the front two tables closest to the stage, and there was a lot of friendly “chatter” between the teams all night long. The outcome was in doubt until the end, but Team Heartbleeders squeaked out the victory and took home the highly coveted first place mug.

Instead, criminal procedure (naturally, given the EFF’s history), patents and the NSA dominated the questions. A highlight was the “JZ v. Jay-Z” round, where we were asked to decide if given quotations were by the singer Jay-Z or cyberlaw all-star Jonathan Zittrain, who livened up the proceeding by reading the questions himself. (And check out this rare photo of JZ imitating JZ and Mark Lemley imitating Jay-Z!) My favorite round was when we were asked to identify the Supreme Court casename by hearing a snippet of its oral arguments, such as a snippet from ACLU v. Reno where Justice Stevens expressed his concern that the CDA would ban parents from talking with their kids online.

The whole event was well-run, but I want to give a special shout-out to Kurt Opsahl and his team of question-writers. I recently put together an IP trivia contest, so I know how hard it is to write good law-related trivia questions–especially for an audience of lawyers who parse words for a living and love litigating ambiguity. I thought the questions were clear and virtually ambiguity-free, and there were a minimal number of protests during the night (a remarkable feat in a room filled with a couple hundred lawyers).