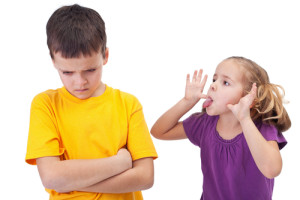 I don’t recommend sticking out your tongue at employees; but if you’re going to do it, don’t do it on Facebook. Photo credit: Mocking and teasing among children // ShutterStock

Jane Stewart, a company manager, posted the following on her Facebook page:

Isn’t [it] amazing how Jimmy experienced a 5 way heart bypass just one month ago and is back to work, especially when you consider George Shoun’s shoulder injury kept him away from work for 11 months and now he is trying to sue us.

The complaint says the post concluded “Love for everyone to hear the real truth! What a loser!” but this sentence wasn’t referenced in the court’s opinion.

Shoun didn’t appreciate these remarks, so he sued for confidentiality violations of the Americans With Disabilities Act (ADA). The defendant responded that Shoun had publicly disclosed his health condition, though the opinion doesn’t specify where or how. (The defendant’s motion to dismiss indicates the public disclosure was Shoun’s separate lawsuit referenced in the Facebook post). The court says there is a factual question about exactly how the employer learned of Shoun’s condition, and this means the court denies the motion to dismiss.

I don’t have an opinion about the likely success of this lawsuit, but I’m less sanguine about the wisdom of this post. Employers, when is it appropriate to mock an employee online for allegedly malingering due to health issues? Answer: NEVER. Putting the legal risk aside, it’s almost certainly a quick route to harming employee morale. If you want to vent about your employees, Facebook is a terrible place to do it. See my recent post, More Proof That Facebook Isn’t The Right Place To Bitch About Your Job–Talbot v. Desert View.