May 10, 2014 · by Eric Goldman · in Content Regulation, Derivative Liability

This is such an easy case, it could have only been brought pro se. The suit involves two Yelp reviews by a user named “Sarah K.” that were allegedly defamatory and otherwise tortious. The court’s substantive discussion (some citations omitted):

Here, plaintiff alleges that Yelp is “a nationwide Internet business directory and business reliability rating and review service.” Plaintiff also alleges that Yelp asks multiple choice questions for a reviewer to click on the number of stars, and that Yelp designed and created the star image and color, which is the rating system. Based on these allegations, the court finds that Yelp qualifies as an “interactive computer service” within the meaning of the CDA. Plaintiff also makes conclusory allegations that Yelp created and developed the libelous promotion, and caused that statement to appear on Google. The court need not take conclusory allegations that are unsupported by plausible factual allegations as true. Rather, the Yelp review itself makes clear that the individual who “created and developed” the review is a user named “Sarah K.” Thus, “Sarah K” is the information content provider of the reviews, not Yelp. Nevertheless, plaintiff alleges that Yelp designed and created the star rating system. However, “[t]he mere fact that an interactive computer service ‘classifies user characteristics does not transform [it] into a ‘developer’ of the underlying misinformation.” Fair Housing Council, 521 F.3d at 1172 (quoting Carafano v. Metrosplash.com, Inc., 339 F.3d 1119, 1124 (9th Cir. 2003)). Indeed, Yelp’s star rating program is similar to eBay’s color-coded star rating system that the Ninth Circuit analogized in holding that classifying user characteristics into discrete categories and collecting responses to specific essay questions does not transform an interactive computer service into a developer of the underlying misinformation. Carafano, 339 F.3d at 1124 (citing Gentry v. eBay, Inc., 99 Cal. App. 4th 816, 717-18 (Cal. App. 2002)). 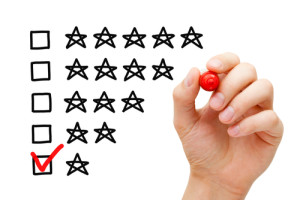 I’m going to give this lawsuit only 1 star. Photo credit: Hand putting check mark with red marker on poor one star rating // ShutterStock

Wow, we don’t see arguments too often any more about the Section 230 implications of star ratings. As the court notes, that argument first failed in the Gentry ruling in 2002!

Fortunately for the plaintiff, the court sidestepped Yelp’s anti-SLAPP motion. If the court had granted the motion (as I think it should have), the plaintiff should be writing a check for Yelp’s attorneys’ fees PLUS a $10,000 mandatory penalty under Washington’s anti-SLAPP statute. Still, I trust Yelp isn’t complaining about its decisive and fairly quick ruling.