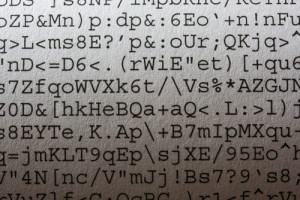 This is what your brilliantly drafted online user agreement looks like to a maniacal law school flunk-out with a heart of pure evil. Photo credit: computer gibberish printout – text without sense // ShutterStock

Even after all of these years, I remain amazed by the bizarre contract misinterpretations that plaintiffs’ lawyers are capable of. Today’s case targeted the eBay user agreement, a document of special interest to me given my contributions to the agreement in the 1990s.

The plaintiffs attacked eBay’s “Automatic Bidding System” (sometimes called “proxy bidding”). Bidders list their maximum bid but only bid an increment above the current bid. As new buyers show up, eBay’s software keeps automatically bidding in specified increments until the bidder’s maximum bid is reached. It’s a pretty intuitive process, and I grasped it fully with my first eBay purchase 15 years ago.

1) “We are not involved in the actual transaction between buyers and sellers.” The court says this provision doesn’t make any promise. “Rather, the statement is simply a general description of how eBay’s auction system works.” That conclusion is reinforced by the provision’s location in the paragraph where eBay explains it’s a marketplace, not an auctioneer.

Several provisions are written in an informal, conversational style, indicating that the agreement is not simply a set of legally enforceable promises, but also an introduction to the eBay marketplace for new users.

However, fluffy contract language does have some risk, as we’ll see in our LinkedIn post coming shortly.

2) “No agency . . . relationship is intended or created by this Agreement.” Most transactional lawyers include this language in contract boilerplate in virtually every contract they draft–hundreds of times over the course of their careers. So it’s interesting to see how the plaintiffs try to twist the provision around. The language is meant as a shield to eliminate the possibility that the vendor unintentionally created an agency relationship with its customers, but here the plaintiffs try to turn it into a sword. They argue that the automated bidding system is eBay acting as an agent of bidders for purposes of placing bids, so eBay breached the no-agency clause. The court also says that this language doesn’t create a promise, but instead “purports only to limit the relationships created by the agreement.”

While this case reached a good result, it offers a good cautionary tale for contract drafters–especially lawyers drafting contracts for successful online businesses whose bank accounts are like honeypots to plaintiffs’ lawyers with an insatiable appetite for someone else’s cash. Don’t just read your contract drafts using the mental filter of a smart legal thinker (which we know you are). Instead, re-read your contract trying to imagine how it will be (mis)interpreted by a maniacal law school flunk-out with a heart of pure evil. If you draft to thwart the latter, you should be better prepared when the cash-hungry plaintiffs’ class action lawyers come a-courtin’.

Note: I still own some of my IPO shares of eBay!