Last night, I moderated an Oxford-style debate at Zero1, which describes itself as “where art meets technology to shape the future.” The debate motion was “Does the U.S. Patent System Stifle Innovation,” and the two “pro” speakers were UCLA professor Christopher Kelty and NPR journalist Laura Sydell; while the two “con” speakers were entrepreneur Jaz Banga and artist/researcher Scott Snibbe.

[Update: the video of the debate is now online.]

As most of you probably know, I have strong views on the debate question, but as moderator I didn’t want to skew the debate. So here’s how I framed the discussion:
___

Tonight’s debate question: “Does the U.S. Patent System stifle innovation?” I know many of you think about the motivations and decisions of individual innovators, but for a moment, I’d like to consider the question from a different perspective: how we structure our economic marketplace.

Ordinarily, we prefer free and competitive markets. Free markets have some systematically dysfunctional aspects, but overall, competition works to solve many social problems. Consistent with our favoritism of free markets, we generally distrust monopolies—a sentiment that can be traced back to our republic’s founding. Recall that the Boston Tea Party was a protest against the East India Company’s monopoly on tea.

We do make exceptions for monopolies. Utilities are one example, where competition could lead to duplicative investments. Patents are another.

As an incentive to spur innovation, some innovators can obtain exclusive control over the marketplace for the innovations they make. (I’m going to use the term “monopoly,” even though patents aren’t an affirmative right to enter the market; they just allow the patentholder to keep others out of the market). In other words, patents are the government rewarding some innovators by giving them a monopoly over their innovation—a deliberate exception to our free market baseline.

Providing a monopoly as a reward for innovation may seem unusual, but it has a surprising free-market underpinning. The patent monopoly encourages innovators to make socially valuable investments in innovations by preserving revenue streams post-invention—however much or little those may be. An innovator who make an innovation that lots of folks value highly, the monopoly can produce a huge payoff; if consumers don’t value the innovation, the monopoly is worthless. Thus, the marketplace sends signals back to innovators about where to make their investments, rather than making innovation investments through non-market-driven considerations, like government fiat.

This takes us to the dilemma underlying tonight’s debate question. Are we better off in a world where we reward innovation investments by creating monopolists? Do we get more innovation, or do we get more of the evils associated with monopolists?
___ 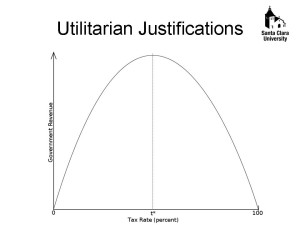 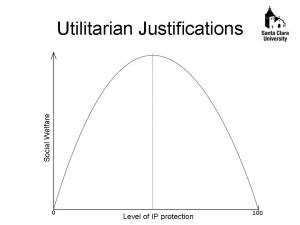 I don’t need to resolve if Laffer was correct about his curve or how t* compared to then-prevailing tax rates to make my analogy. Assume that if we provided zero patent protection for inventions, we’d have no inventions (I know this is a dubious assumption, but work with me). Further assume that an overregulated system of patents could stop new innovation if every new innovation would transgress someone else’s existing legal rights. If we accept these assumptions, we can draw a curve that looks like the Laffer Curve where too little or too much patent protection produces zero social welfare. If so, people differ on where they think the current level of patent regulation is in relation to the social welfare-maximizing level of patent regulation, and the vote reflects in part if you think we are currently to the left or the right of that level.

With that, we put the debate question to the audience for its final vote (we surveyed the audience at the beginning to establish a baseline). The con arguments garnered more new votes than the pro arguments, so the “con” debaters won–by inference, convincing more people that the U.S. patent system doesn’t stifle innovation. Interestingly, the online vote is much more strongly in favor of the motion (based on a small number of votes) than either vote at the debate, perhaps reflecting differences between the online and offline audiences.