Who owns a single number, such as 3.95%? The question probably sounds crazy. Numbers are just facts, and the Supreme Court said in 1991 that facts aren’t copyrightable. So of course no one owns, or could own, a number…right?

Yet we see copyright claims for single numbers with depressing frequency. A recent court ruling rejected one such claim to copyright the number “3.95%”, but it took the judge nearly 70 pages to explain why a single number couldn’t qualify for copyright protection. Given how surprisingly hard it was to kill off a copyright claim for a number, we’re likely to see more ridiculous copyright claims in the future. 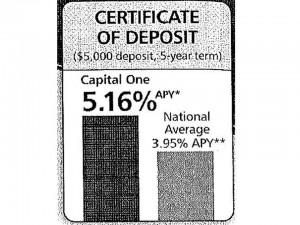 An example of a Capital One ad using the Banxcorp data

Banxcorp publishes interest rate averages. For example, it published that the United States national average interest rate for five-year certificates of deposit as of December 21, 2005 was 3.95%. Capital One Financial Corp. obtained a license to republish Banxcorp’s averages in advertising; the ads show how Capital One’s interest rates beat Banxcorp’s national averages. The lawsuit involves Capital One’s advertising of a co-branded offering to Costco members. Banxcorp asserted that Capital One and Costco infringed its copyright by publishing ads containing its averages in violation of the Banxcorp-Capital One license agreement.

Banxcorp prepares its national averages by picking one big bank in each state, querying their interest rates, and then computing an unweighted mean of the numbers. The court says that this preparation method doesn’t create any copyright because Banxcorp is trying to “represent an empirical fact about the world.” The court also says that “the single output of a complex calculation is not itself a compilation.”

Both conclusions might sound obvious, but then why did it take 70 pages–and 4.5 years of litigation (so far)–to reach such unsurprising conclusions? The root of the problem lies in precedent cases sloppily implying that price estimates can be copyrightable. The Banxcorp opinion summarizes:

If the data purports to represent actual objective prices of actual things in the world — the actual price of an actual settlement contract on a particular day — it is an unprotectable fact; if the data purports to represent an estimated price of a kind of idealized object — for instance, what a hypothetical, mint condition 2003 Ford Taurus with approximately 60,000 miles might be worth — then the hypothetical price may be eligible for some form of copyright protection in the right circumstances.

Thus, the Banxcorp court distinguishes multiple scenarios that might have created copyrightable numbers: if the number estimated the future; if Banxcorp used weighted averages; if Banxcorp constantly reshuffled the banks it surveyed, or if competitors’ averages varied from Banxcorp’s average widely enough or moved in opposite directions. Banxcorp lost this case because its averages were too simple, but the court leaves open the possibility that future publishers with more complicated algorithms could get a more favorable reception.

Banxcorp’s lawsuit is part of an emerging trend for publishers of financial industry information to assert aggressive intellectual property claims as their existing business models are being disrupted. Another example in this trend was the 2011 ruling in Barclays v. theflyonthewall. In that case, an investment bank sought to prevent a website from republishing its stock buy/sell recommendations. Instead of relying on copyright, the investment bank asserted a controversial doctrine called “hot news misappropriation.” As with the Banxcorp case, the IP overclaim failed, but only after substantial wastes of time and money.

A final note: Capital One didn’t just grab Banxcorp’s data for free. Capital One paid Banxcorp $6,000/year to license its data; the parties dispute if Capital One’s license covered the ad at issue. Now that we know Banxcorp doesn’t have enforceable copyrights in its averages, a licensing program for interest rate averages may not be a viable business. Unfortunately, publishers of uncopyrightable data tend to be fairly pugnacious about protecting their assets, so I expect financial information publishers will explore dubious alternative legal principles to preserve their business of licensing uncopyrightable data, such as “browsewraps,” hot news and trademarks.