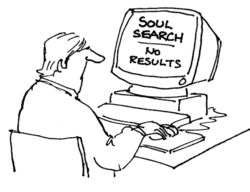 This is one of the many bogus pro se lawsuits over Google search results. Like the others, it goes nowhere (though the judge patiently let the plaintiff file a third amended complaint). The plaintiff claims he was being defamed on a third party website and he asked Google to de-index the website but it refused. So he sued Google for defamation.

2) The plaintiff seeks to hold Google responsible for content from the third party website (cite to Carafano). The court says the plaintiff “alleges that Google “stored” and “broadcasted” the information.”

In a footnote, the court rejects the plaintiff’s assertion of “aiding and abetting,” but it doesn’t cite any of the numerous precedents supporting that conclusion, such as the Backpage case, Simmons v. Danhauer, Cisneros v. Yahoo, Goddard v. Google, Dart v. Craigslist and Doe v. GTE.