[Eric’s note: like many IP professors, I’ve taught the 1979 9th Circuit ruling in AMF v. Sleekcraft for years. It’s the flagship Ninth Circuit opinion on the likelihood of consumer confusion factors, and it’s one of the nation’s top 2 cases on that topic. (The Second Circuit’s Polaroid case is the other).

The Sleekcraft opinion itself is remarkably nuanced. Most multi-factor analyses engage in what Barton Beebe calls “factor stampeding,” where the judge manipulates his/her analysis of the factors so they all support the eventual winner. In contrast, the Sleekcraft opinion exhibits a degree of care and balance we rarely see in multi-factor analyses.

Especially remarkable is the opinion’s denouement:

we conclude that a limited mandatory injunction is warranted. Upon remand the district court should consider the above interests in structuring appropriate relief. At minimum, the logo should appear in all advertisements, signs, and promotional materials prepared either by appellee or by his retail dealers, and on all appellee’s business forms except those intended for strictly internal use. A specific disclaimer of any association with AMF or the Slickcraft line seems unnecessary, nor do we think it necessary to enjoin Nescher from expanding his product line. In its discretion the district judge may allow appellee sufficient time to consume supplies at hand and to add the logo to more permanent assets, such as business signs.

This made me curious–what relief did the district court actually order on remand? My RA Sruli Yellin picks up the story from here:]

AMF v. Sleekcraft, 599 F. 2d 341 (9th Cir. 1979), is famous for the 9th Circuit’s articulation of the likelihood of confusion multi-factor test. The test prescribes that a court look to: (1) strength of the mark; (2) proximity of the goods; (3) similarity of the marks; (4) evidence of confusion; (5) marketing channels; (6) types of goods and customer care; (7) intent; and (8) likelihood of expansion. After applying this analysis, the court found that there was a likelihood of confusion between the Slickcraft and Sleekcraft marks and remanded to the District Court for entry of an injunction.

But what happened on remand? Which party ultimately prevailed? Did the parties settle or was an injunction entered? I couldn’t find the answer anywhere. So, I decided to reach out to one of the two attorneys listed on the 9th Circuit pleadings, Mr. Robert Lyon, to see if I could find the answer.

Raised in a family of patent lawyers – his father and grandfather were both patent attorneys who started the eponymous firm Lyon & Lyon – Mr. Lyon has been practicing IP law for more than 60 years. The Lyon & Lyon firm represented AMF on a number of trademark cases, and AMF v. Sleekcraft was Mr. Lyons first case.

I couldn’t get Sleekcraft’s side of the story, but Mr. Lyon had lots of interesting things to say. A little history of AMF as well as the circumstances leading up to the District Court case provides helpful context for the denouement.

(For more on AMF’s history, see Wikipedia and this article hosted by Harvard Business School).

American Machine and Foundry (later AMF), was founded in 1900 by Rufus L. Patterson, inventor of an automated cigarette-making machine. (US Patent 829,288). AMF took off in the 1950s when it began manufacturing pinsetters for bowling alleys. In the 1960s and early 70s, AMF bought numerous sporting equipment companies to leverage their manufacturing abilities, including Roadmaster bicycles, Harley-Davidson motorcycles, Head skis, Voit balls, and, in 1969, Slickcraft boats.

By the end of the 1970s, however, AMFs market dominance – and profits – began to shrink. According to Mr. Lyon, policing of trademarks became a substantial part of AMFs plan to regain market share, and Lyon & Lyon handled a number of those cases.

Enter Sleekcraft – a manufacturer of high-end racing boats, founded in 1968 by Bruce Nescher. In just a few years, Sleekcraft went from the new kid on the block to a serious AMF competitor. Sleekcraft managed to increase its sales about 20-fold, reaching annual sales of $6M by 1975, on par with AMFs average sales of $5.5M per year. If policing trademarks was AMFs primary objective, Sleekcraft probably looked like a ripe target. AMF registered the Slickcraft mark and sued Sleekcraft.

AMF – a veritable megacorporation – had just two attorneys, one associate and one partner, representing them throughout the entire Sleekcraft case. The two Lyon & Lyon attorneys even handed the appeal to the 9th Circuit! You rarely see that kind of litigation staffing these days. The District Court case was Mr. Lyon’s first trial, and he says he tried the entire case on his own. As he remembers it, the partner whose name appears on the pleadings was managing the case only in title, per firm policy forbidding associates from trying cases.

The entire bench trial lasted one day, and Judge Curtis ruled that there was no likelihood of confusion. Mr. Lyon reports that the cards were stacked against him from the beginning. The District Judge, Judge Jesse Curtis, disliked IP cases. Confounding the problem, apparently the Judge and opposing counsel were both boat enthusiasts. To them, the case was clear: No one in their right mind could possibly mistake a Sleekcraft for a Slickcraft.

Here are some images of SleekCrafts and Slickcraft boats. Do you think there is a likelihood of consumer confusion? 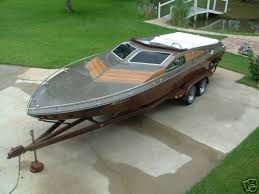 After finding a likelihood of confusion, the 9th Circuit remanded the case back to district court for entry of an injunction. Judge Curtis entered an injunction preventing Nescher from using the Sleekcraft logo alone/on its own – it had to be combined with something else, e.g., “Boats by Nescher”. Mr. Lyon made a big point about this, saying that the Nescher logo was highly stylized and really different from AMF’s, insinuating that no one could possibly mistake the two. If avoiding confusion was the genuine motivation for AMFs suit, then that’s a pretty good result. But Nescher had already begun to use the distinctive logo on its boats and in much of its advertising. Perhaps the parties could have reached an amicable result to avoid brand confusion without litigation.

Was this a good outcome for AMF? That depends on its motive. As recounted in the appellate decision with respect to the intent of the parties, the parties were “genuinely interested in avoiding confusion.” In fact, the claims for money damages were dropped on appeal. It’s hard to believe, however, that the parties were genuinely interested in avoiding confusion when in reality Sleekcraft had increased its sales 20 times over in just five years, reaching sales figures of $6M a year, on par with Slickcraft’s $5.5M average annual sales. All in all, I think this was a Pyrrhic victory for AMF.

Here are several exemplars of the pre- and post-injunction logos that I managed to track down so you can decide whether the court got it right for yourself: 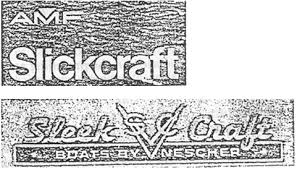 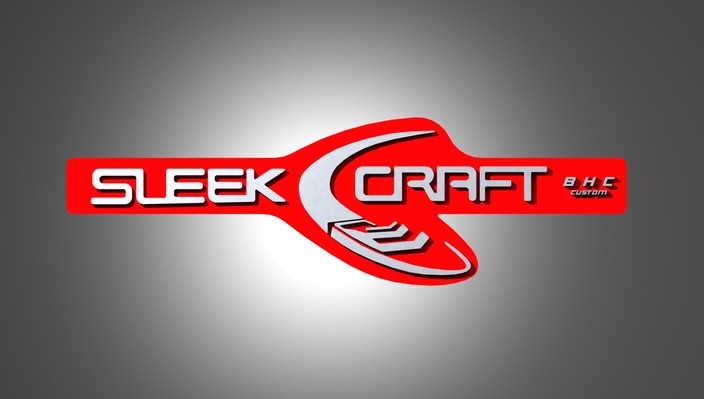 Pre-Injunction SleekCraft Logo (this is an Autocad drawing made by an enthusiast who wanted the retro logo on a plaque). This same logo appears on old advertising and boats. 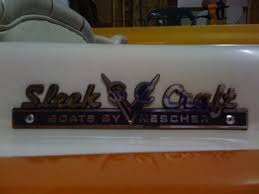 What Happened to the SlickCraft Mark?

As mentioned above, AMF started to show signs of instability in the late 1970s. Sales across AMF’s subsidiaries dropped sharply for a number of reasons. AMFs problems of the late 1970s continued into the 1980s when Minstar, Inc. acquired it in a hostile takeover. Minstar sold off many of the subsidiaries. In 1985, the Slickcraft mark was expressly abandoned, and AMF reportedly took a tax write off for the loss. Mr. Lyon believes that the injunction is still on the books to this day. [Eric’s note: a search in TESS indicates there have been a couple of more recent attempts to resurrect the trademark registration].

Today, AMF is a publicly-held corporation primarily involved in the bowling industry. Though Wikipedia attributes AMFs problems of the 1980s to shaky leadership and dropping sales, something makes me think it had something to do with poor IP strategy.