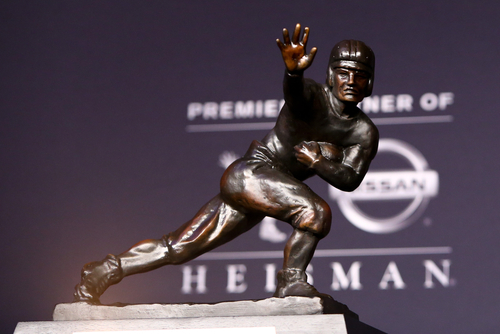 On his journey to winning the Heisman Trophy for the 1991 season, University of Michigan’s Desmond Howard returned a punt 93 yards for a touchdown and famously celebrated by recreating the stance of the trophy itself. See the photo in question, and the plaintiff’s attempts to merchandise it, at his “store.” (Check out the number of times the site stuffs the phrase “Desmond Howard”–I could see why this might raise some issues of its own).

In a wordy 67-page complaint that goes into overtime, the man behind the lens for the famous “Heisman Pose” photograph is now taking a group of defendants to court for allegedly copying and reproducing the work in various ways.

Brian Masck’s Claims Against the Plethora of Defendants

According to Masck, the defendants violated his copyright in the following ways:

(3) Getty Images published the photo on its website and sold unauthorized licenses;

(4) Champions Press published the photo without permission in Desmond Howard’s biography, I Wore 21;

(6) Amazon and Wal-Mart allowed merchants to sell copies of the work online.

Against everyone except Amazon and Wal-mart, Masck also included unfair competition claims under Lanham Act §1125 and Michigan state law.

The Strength of Masck’s Copyright Claims

Masck’s photo clearly satisfies the requirements for copyright protection. Because he took the photo as a freelancer, there does not seem to be any ownership issues.

But the fact that several photographers captured similar shots of Howard striking the Heisman pose raises a few questions about the scope of Masck’s protection. First of all, the other photographers’ shots demonstrate that the trophy itself underlies everything–if Masck were claiming protection for the idea of the Heisman photo, he would be on the wrong side of the idea-expression dichotomy and in a weak position to sue. But the main thrust of the complaint is that Masck’s specific expression is special:

Jeff Shrier also caught the pose with his camera, but from an angle that did not get the full facial expression, cut off one of Howard’s feet, and simply does not have the same energy and style. Similarly, Chris Covatta’s picture from Howard’s opposite side cuts off the outstretched hand, shows almost none of the face, and does not really give that same sense of a famous pose being struck. Brian had by far the best shot – really the only shot[.]

With several other photographers capturing the same moment, there is also the practical issue of proving that these defendants infringed on his work rather than someone else’s. Observing the photographs in the complaint, Masck’s does seem distinguishable from the rest for the reasons mentioned above. But Masck took further steps to prove that certain defendants (including Howard himself) were copying from his expression specifically:

In 2011, Brian Masck had altered the Heisman Pose photograph ever so slightly, so he could track unauthorized use of his photograph. He added two tells to the photograph. First, he removed the branding from the glove on Desmond Howard’s right hand. Second, he extended the lettering on the football. These small alterations do not appear to the untrained eye, but assist Brian Masck in tracking infringing uses of his photograph.

All in all, Masck’s photo is likely protected but only as to his exact expression. The question becomes how much money he can demand realistically.

Masck Failed to Register the Photograph Until 2011

Masck’s delayed registration of the photograph has cost him the ability to demand statutory damages. Under § 412, statutory damages are only available if the author registers the work with the Copyright Office prior to infringement, or within three months after publication. Masck registered the photograph in August 2011, which makes him almost two decades late.

According to Masck, the sluggish effort to register the work came from bad legal advice:

His counsel at that time advised him that, because Sports Illustrated had published the photograph and correctly credited it to him in the accompanying byline, his photograph would be fully protected by copyright law . . . Consequently, Brian did not register his Desmond Howard Heisman Pose photograph with the Copyright Office at that time.

Normally, the absence of statutory damages would make this a low-dollar-value dispute. However, Masck can still ask for actual damages and the infringer’s profits, and those numbers could be meaningful with a high-value photo like this one. Then again, because actual damages and profits would be time-consuming and difficult to prove, I would not be surprised if the parties settled.

In addition to the copyright claims, Masck also brings unfair competition claims alleging that the defendants caused confusion as to the origin of the Heisman Pose photo. The problem with these claims is that they are effectively trying to emulate copyright protection by stretching the language of the Lanham Act.

In Dastar v. Twentieth Century Fox, the Supreme Court struck down such an attempt:

[The phrase “origin of goods”] refers to the producer of the tangible goods that are offered for sale, and not to the author of any idea, concept, or communication embodied in those goods . . . To hold otherwise would be akin to finding that § 43(a) created a species of perpetual patent and copyright, which Congress may not do.

The Court stressed that the “creative talent” embodied in the work was not left without any protection–if it had qualified, it could still have been protected by copyright. This same reasoning should also apply to Masck’s work, because his claims are based on the defendants copying his photograph, not passing off his physical copies of the photograph as their own.

The Unintentionally Hilarious Tone of the Complaint

I don’t mean to downplay or ridicule Masck’s attempt to fight for the fruits of his labor, but there were several points in the complaint where I just had to laugh. Some passages sounded like they belonged in a memoir:

”In that pre-digital era, he enjoyed the physical act of producing a photograph. He liked to set up the trays and chemicals, watch the image appear, adjust the exposure with his hands, and try different kinds of emulsions and papers to produce different effects.”

“[Brian] saw a story that needed to be told, and he told it in his way, with his camera. He realized then that he was a photojournalist.”

When he headed to college at the University of Michigan in 1980, he started his studies in the art school . . . But after he got involved with the Michigan Daily (the student newspaper on campus) and the Michiganensian (the yearbook), Brian began to lean toward photojournalism.

. . . some passages seem like they’re trying to take subtle jabs at the other photographers on the field:

“‘We said that big plays are going to tell the story of this game’” . . . The two photographers saw the potential for Howard to break free at some point in the game . . . Little did either of them anticipate that the foresight, perceptive planning and skill of one of them would facilitate the creation of a college football icon, let alone a broader cultural touchstone.”

. . . and then there are those sentences which just ask for it:

“Of photography, says Brian today, ‘It’s just what I do.'”

I could go on, but for now it suffices to say that we will have to wait and see if this goes to trial for actual damages or settles out of court. But if you happen to be looking for a freelance photographer memoir with a flair for the dramatic, the complaint link is at the top. Enjoy.