Sandy Routt is an artist (check out SandysBeachGifts.com if you care). She claims that Amazon affiliates (called “associates” in Amazon’s vernacular) displayed her copyrighted photos (product shots) of her products on their websites and then bait-and-switched potentially interested buyers to alternative offerings. Instead of suing the affiliates, Routt sues Amazon.com for the affiliates’ behavior, alleging copyright infringement, trademark infringement and violations of the state consumer protection law (the CPA). Amazon defeated the claims on a 12(b)(6) motion to dismiss, though the court gives Routt a chance to replead.

Vicarious Liability. The court dismissed her various vicarious liability claims because, in all cases, Routt didn’t adequately allege that Amazon had sufficient control over its affiliates’ activities. The court cites Amazon’s self-protective language in its affiliate agreement and Routt’s overall too-general pleadings. Routt argued that Amazon’s contract requires affiliates to comply with IP law and says it can terminate affiliates who violate that provision. However, the Ninth Circuit rejected the salience of those facts to vicarious liability claims in Perfect 10 v. Amazon. The court also says it’s persuaded by the analogous Sellify v. Amazon ruling, also rejecting Amazon’s liability for its affiliates’ conduct.

Direct Copyright Infringement. The court says Routt only alleged copying by affiliates, not by Amazon.

CPA. Routt claimed that Amazon was part of a far-reaching “scam” whereby its affiliates would engage in bait-and-switch and Amazon would profit. The court says that Routt didn’t marshal adequate facts in the complaint to support this theory.

Contributory Infringement. The court says that Routt’s pleadings were too conclusory. 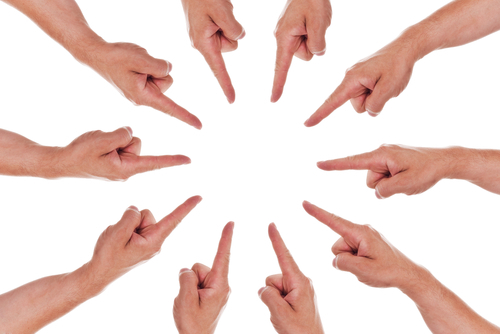 Implications. Over the years, we’ve seen aggressive legal arguments from plaintiffs–usually exhorted with the utmost conviction of their veracity–that advertisers should be accountable for their affiliates’ actions. Among the worst offenders are the FTC and state AGs’ offices, but plenty of plaintiffs have breathed fire on this theory too. However, when those theories have been tested in court, they have generally failed miserably. I don’t know why it’s so hard to understand that an advertiser shouldn’t be liable for the conduct of its independent contractors, but the overreaching legal arguments just won’t quit. How many advertiser wins in court will it take to convince plaintiffs to move on?

* Important Ninth Circuit Ruling on Keyword Advertising, Plus Recaps of the Past 4 Months of Keyword Ad Decisions

and see the many cases cited in these last two posts

[Photo credit: “a circle of fingers point to the center” // Shutterstock]