Retweets ≠ Endorsements (As a Matter of Law)–Flynn v. CNN

Some members of Gen. Michael Flynn’s family sued CNN for implying that they are QAnon followers. The case involves:

The court clarifies that, in this context, the chyron’s use of “follower” refers to an adherent of the organization’s beliefs, not just the mechanical act of following an account on Twitter. If you watch the video, that interpretation makes sense; but this is also one of several places the court could have been more charitable to the defense.

CNN argued that the Flynns’ social media activity shows they in fact are QAnon adherents. Even though the Flynns made statements online that could be interpreted as QAnon dog whistles, the court lets them slide on a motion to dismiss:

The Court cannot assume that Jack believes in every viewpoint held by the QAnon movement merely because Jack tweeted that he shares QAnon’s alleged belief in the Constitution, the Bill of Rights, and equal justice under the law. CNN’s assertion that believing in these principles automatically makes someone a QAnon adherent is simply wrong. A person can believe in certain viewpoints espoused by a movement without believing in all aspects of the movement

The last sentence is surely true but shouldn’t dispose of the matter. Few group adherents believe everything the group says. Still, given the possible dog whistles, I’m sure CNN’s lawyers will explore these social media statements in their depositions.

Jack Flynn also retweeted a tweet that said “Qanon is not a violent conspiracy. We are every day people seeking truth. . . . . Qanon’s, share and tell your story.” Given the “we” in the original tweet, I doubt many people would retweet this statement without adding their own criticism–unless they were at least sympathetic to the tweet’s content. However, the court says retweets ≠ endorsements:

Jack did not make the statement, “We are every day people seeking truth.” He retweeted it. There are many reasons that someone might retweet a statement; a retweet is not necessarily an endorsement of the original tweet, much less an endorsement of the unexpressed belief system of the original tweeter, as CNN would have it. Therefore, at the motion to dismiss stage, the Court cannot conclude as a matter of law that Jack adopted the content of the tweet and was therefore calling himself a member of the QAnon movement by using the word “we.” Nor can the Court conclude that the Flynns personally believed the other statements that they retweeted, particularly in light of the Flynns’ factual allegation that they do not share the beliefs of the QAnon movement 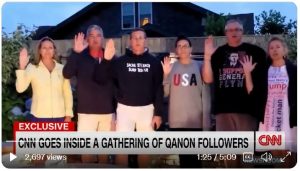 CNN’s video shows the Flynns reciting the phrase “where we go one, we go all” (and videoing themselves doing it). For more on the WWG1WGA phrase, see this video. The Flynns say that the phrase “did not signify any kind of support for QAnon” and that “[i]t was not an oath of allegiance to QAnon, or any kind of oath at all.” The court says that rebuttal is good enough to survive a motion to dismiss. I mean…really? I had never even heard the phrase before seeing that CNN video, yet somehow the Flynns (1) knew the phrase, (2) memorized it, (3) articulated it in unison, (4) raised their right arms while doing so, and (5) did all of this while videorecording themselves. Why did they do that? I’ll be eager to see how the Flynns credibly answer that question in their deposition.

What does it say about you if you “follow” someone on Twitter? What does it say about you when you retweet someone else’s tweet? These are not just questions for Millennials or Zoomers. They are critical questions in this motion to dismiss. CNN argues that the Court should conclude as a matter of law that by retweeting another’s tweet, the retweeter is adopting every word in the tweet as their own. A retweet, in CNN’s view, cannot merely be used to comment on another’s tweet or to forward the fact of its existence to another. CNN also argues that the Court should adopt the position that when you “follow” a person’s Twitter feed, you become that person’s “follower,” in the sense that you are now an adherent to the entire belief system of the tweeter. By following someone on Twitter, in CNN’s view, you are not merely interested in seeing what the person you are following has to say. The Court remains unwilling to adopt as a matter of law CNN’s sweeping assertions regarding the significance of a retweet, or what it means to “follow” someone on Twitter

Even if CNN made overreaching or tendentious arguments (which I don’t think they did), the legal system has several mechanisms to protect good-faith mistakes by media outlets. The most common protective doctrine is the actual malice standard, which excuses liability for factual errors in some cases. It’s unclear to me if the Flynns qualify as public figures sufficient to trigger the actual malice standard. Just being a family member of a high-profile figure (Gen. Flynn) normally isn’t enough, but perhaps they had otherwise cast themselves into the public eye enough to trigger the higher scienter standards. Oddly, this issue wasn’t properly litigated in this motion because CNN raised it too late in briefing. I wonder if it will be dispositive come summary judgment.

Another defense-favorable doctrine is anti-SLAPP provisions, which require plaintiffs to make prima facie showings when their cases that involve matters of public concern. Again, I’m not sure if the QAnon status of Gen. Flynn’s family members constitutes a matter of public concern. Private beliefs of private individuals shouldn’t satisfy this standard. However, their possible involvement, correlated with Gen. Flynn’s possible fealty to QAnon, could signal the infiltration of the QAnon beliefs into the highest levels of the government and #MAGA circles, which would very much be a matter of public concern. Anti-SLAPP laws would have helped this case because there’s no doubt in my mind the Flynns will eventually lose this case. (The word “followers” in the chyron clearly doesn’t refer to them in context, so they–not CNN–are making the tendentious argument; and CNN had several data points–including the video itself–to suspect QAnon membership, even if it’s ultimately disproven). Anti-SLAPP laws would get us to the inevitable denouement of this case faster and with less drama. However, the case is being litigated in New York federal court applying Rhode Island law, so I’m not sure if any anti-SLAPP laws reach that circumstance, and it doesn’t appear CNN has tried to invoke them. Another reminder that we need a federal anti-SLAPP law.

Without the actual malice standard or an anti-SLAPP burden-switch, the court is free to give every benefit of the doubt to the plaintiffs. I doubt the judge will be so forgiving when the case reaches summary judgment.

As much as I’m troubled by the plaintiffs’ case, in other respects, this opinion is implicitly speech-friendly. It says that social media users can follow accounts and retweet third-party content without being legally accountable for the views expressed by those third parties. This reminds me of the Bland v. Roberts case, saying that government employees could like a politician’s statements on social media without fear of retribution. It also reminds me of the numerous cases holding that linking to third-party content or retweeting content doesn’t create liability for the linked/retweeted content. See, e.g., Banaian v. Bascom.