Remember the Fifth Circuit case from 2018 holding that a real restaurant’s name could infringe trademark rights in the name of a fictional restaurant from the TV show SpongeBob SquarePants, the Krusty Krab? Recently, a district court in the same circuit took up a very similar issue, assessing Viacom’s trademark and copyright infringement claims against the owner and operator of a pop-up restaurant and bar called The Rusty Krab. The Southern District of Texas granted Viacom’s motion for preliminary injunction, finding a substantial likelihood of success on the merits of both claims.

The court begins with findings of fact, lavishing attention on the show’s plot and popularity. It highlights the millions of dollars Viacom has spent on advertising; the extensive unsolicited media coverage; the spin-off television shows, films, theme parks, comic books, and hotels; the Tony-award winning Broadway musical; the massive collection of licensed toys and tchotchkes; the fact that Time Magazine named the Krusty Krab one of the eighteen most influential fictional companies of all time. It notes that, according to SpongeBob lore, the fictional restaurant “the Krusty Krab” was originally a fictional retirement home called “the Rusty Krab,” and that Viacom once “brought the Krusty Krab to life” with an immersive experience at San Diego Comic Con. Finally, it points out Viacom is the owner of three valid trademark registrations for the KRUSTY KRAB mark and 400 copyright registrations covering “creative aspects of the SpongeBob SquarePants franchise,” including episodes from the animated television series, movies, drawings, and stylebooks featuring artwork from the franchise.

Defendants, meanwhile, operate themed pop-up restaurants and bars in Houston, Texas. The owner has described his goals in creating the Rusty Krab pop-up as an effort to indulge in nostalgia and “make people feel like they were in the infamous living room of SpongeBob.” The pop-up in question featured a themed menu (including Krabby Patties), recreations of SpongeBob scenes and characters, interactive exhibits, and appearances by SpongeBob himself. Judging from the Rusty Krab’s marketing efforts and social media promotion as detailed in Viacom’s complaint, the pop-up was far more focused on providing the backdrop for Instagram-worthy selfies than it was on producing edible food.

Defendants argued, without offering much support, that their pop-up represents parody or expressive use of Viacom’s trademarks and copyrighted material; the restaurant’s website included a disclaimer and described the project as an “artistic adaptation.” The court lists among its conclusions of fact:

Meanwhile, the Ninth Circuit in Mattel v. Walking Mountain (affectionately known as the “Barbie in a Blender” case) noted that “every court to address the issue whether a defendant’s work qualifies as a parody has treated this question as one of law to be decided by the court.” The Rusty Krab court expands upon these points in its subsequent section detailing findings of law, but its discussion is fairly conclusory, mainly comprising maxims about what a parody is and isn’t rather than specific discussion of the defendants’ use and why it fails to qualify. The court does point out that the target of the parody—the trademark or copyrighted work used—in both trademark and copyright fair use analyses must also be the thing parodied (I have called this the Cat Not in the Hat rule). The defendants here did not use the SpongeBob universe to communicate any parodic or critical message about SpongeBob or its fans, but rather to exploit fans’ nostalgia by using Viacom’s trademarks and copyrighted works. I don’t necessarily disagree with the holding that defendant’s use is not a fair use, but am surprised by the short shrift that question is given considering its key role in the case.

The court spends more time on its likelihood of confusion analysis. Courts in the Fifth Circuit consider: (1) the type of mark allegedly infringed; (2) the similarity between the two marks; (3) the similarity of the products or services; (4) the identity of retail outlets and purchasers; (5) the identity of the advertising media used; (6) the defendant’s intent; and (7) actual confusion. Like the Fifth Circuit in the prior Krusty Krab case, the district court does not pin down with specificity what exactly Viacom’s KRUSTY KRAB trademark is a trademark for. In comparing the services offered in connection with each mark, the court asserts that “both marks identify restaurants: one, a fictional eatery and the other, an actual eatery with the same motif as the first.” But federal trademark rights require use in connection with goods or services that move in interstate commerce—real goods or services, not fictional ones. And the three registrations that Viacom owns for KRUSTY KRAB are for aquarium ornaments, plastic cake decorations, and a website featuring entertainment information related to television programs and cartoons. While common law trademark rights can and often do support federal infringement claims, an infringement plaintiff must show ownership of a valid mark as a threshold requirement for the cause of action. Identifying that mark also helps the court make accurate determinations about each likelihood of confusion factor, including the mark’s inherent and commercial strength. So when the court assesses strength by simply proclaiming “the KRUSTY KRAB mark is strong, having acquired distinctiveness through secondary meaning,” it’s fair to ask—which KRUSTY KRAB mark or marks is the court deeming strong, and is it comparing defendants’ use to one, some, or all of plaintiff’s common law and registered marks? Defining the scope of Viacom’s trademark rights more explicitly might not change the outcome. But it seems a task worth undertaking to create clear precedent.

The rest of the likelihood of confusion factors unfold roughly as expected. The court deems a real restaurant to be within the zone of natural expansion for a fictional restaurant—interesting but not surprising in light of examples like Bubba Gump shrimp and Viacom’s previous use of its trademarks in connection with an interactive experience similar to the Rusty Krab. Actual confusion is always very strong evidence of likely confusion, and the court finds it here. Citing the Fifth Circuit in Krusty Krab, the district court asserts that “anecdotal instances of consumer confusion, even if quickly dispelled” qualify as actual confusion. The “quickly dispelled” bit sounds more like initial interest than point of sale confusion, unless that confusion is dispelled upon arrival at the restaurant, long after tickets have been purchased. But Viacom includes eight examples from social media and review sites it deems evidence of actual confusion, at least two of which do seem to reflect confusion: one angry customer posts a negative review of the food that concludes “definitely reporting this place to its perspective owners @nickolodeon,” while another apparent visitor posts on social media “I legit thought they DID have a license because literally there’s not even like a sign to try to play off it’s not spongebob or Krusty krab related[.]” 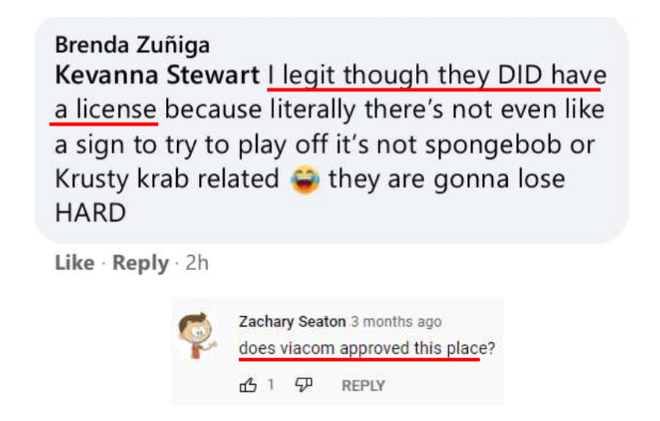 A few other examples demonstrate, if not deception, at least skepticism or uncertainty: “Hope y’all got a licensing rights from Nickolodeon/Viacom cuz if not… they’ll shut your ass down”; “How the heck did she get the licensing for this? I predict a cease and desist letter”; “I WILL DEFINITELY BE CONTACTING NICKOLODEON TO ASK IF THIS GHETTO PLACE HAVE THE RIGHTS.” 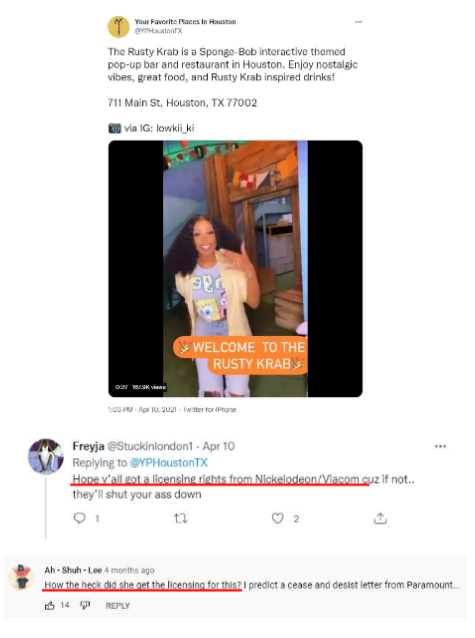 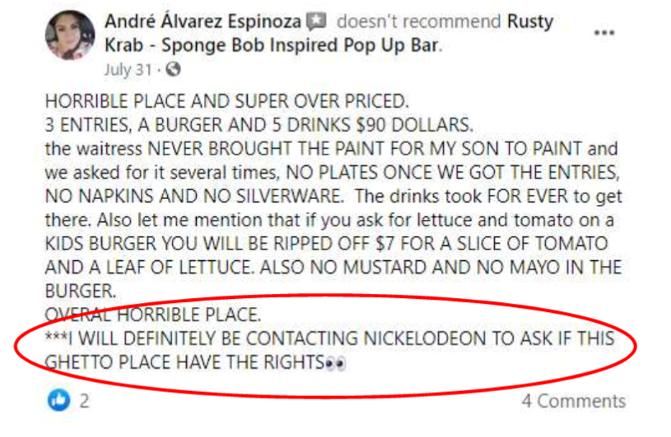 The court then moves on to consider Viacom’s copyright infringement claim. It confirms both ownership of valid copyrights and copying by the defendants of original constituent elements of the works. In fact, it notes that even though the defendants didn’t copy plotlines or extensive details, their copying of “central, principal characters and iconic local[e]s and backgrounds from the series” constituted the “heart” of the works in question. The court points out that the defendants played footage from the show in the restaurant, used images of SpongeBob, copied the clam-shaped sign from the original Krusty Krab, dressed employees in costumes of multiple characters, and recreated show backgrounds by painting them on the restaurant’s walls and tables.

In response to the defendants’ copyright fair use argument, the court considers (1) the purpose and character of the use; (2) the nature of the copyrighted work; (3) the substantiality of the portion used in relation to the copyrighted work as a whole; and (4) the effect on the potential market for or value of the copyrighted work. As a bar and restaurant, the use is commercial, but is it also transformative? Unsurprisingly, the court finds it is not: rather than communicating parody, satire, criticism, or some new message, the defendants’ use only sought to replicate and profit from Viacom’s copyrighted works. The fictional nature of Viacom’s works and defendants’ substantial use also weigh against a finding of fair use. As for the last factor, defendants “produce no evidence that their pop-up would not impact the potential market for derivative immersive works, similar to their pop-up,” that Viacom might in future create. (The disgusted one-star reviews that lead the court to note “the purportedly unsafe and unsanitary conditions in the pop-up as well as the poor quality of…services” may bolster its trademark claims but perhaps undermine this conclusion about defendants’ impact on the market for the copyrighted works.)

This case builds on not only the prior Krusty Krab case, but the broader line of cases assessing intellectual property rights in elements of fictional universes and under what conditions unauthorized use of those elements might be allowed. Fanworks seek to create something pleasurable—and sometimes profitable—that exploits’ fans love for the universe and its characters but risk trademark and copyright liability in the process. In this case, imbuing the fictional marks with real trademark rights, finding a brick-and-mortar restaurant to be in close proximity to a restaurant in a television show, and making quick work of dispensing with defenses grounded in the First Amendment are consistent with prior case law and suggest the creators of those fictional worlds will retain the ability to rein in use by others—especially uses as uncreative as this one.