In 2014, IJR Capital Investments applied to register THE KRUSTY KRAB as a trademark for restaurant services based on an intent to use the mark in the future. IJR’s Javier Ramos claims the name was inspired by “the crust that sticks to the top of crabs when they are put in a seafood boil.” At some point, he became aware that “the Krusty Krab” is also the name of a fictional restaurant featured in the cartoon “SpongeBob Squarepants,” but remained undeterred in his choice of eatery name. 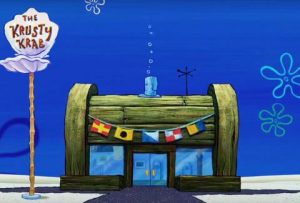 Viacom, owner of the SpongeBob franchise, sent IJR a cease-and-desist letter, demanding the restaurateur drop the ITU and drop on the deck and flop like a fish. Viacom then sued to enjoin use based on false designation, unfair competition, trademark infringement, and dilution under Texas common law and the Lanham Act. The district court (S.D. Texas) granted summary judgment for Viacom on its common law trademark infringement and federal unfair competition claims. The court found trademark rights for Viacom “[b]ecause ‘The Krusty Krab’ is a recurring element of the ‘SpongeBob SquarePants’ show.” In locating trademark rights in that “recurring element,” it followed a line of cases that held “Daily Planet” and “Kryptonite” valid marks based on their role in Superman’s fictional universe. The district court focused on SpongeBob’s television and movie viewership, profits, and longevity as establishing use and distinctiveness. It also referenced Viacom’s “sales and licensing of consumer products” as evidence of trademark ownership but never enumerated what the licensees actually sold.

The Lanham Act requires more. In order to establish federal trademark rights, a producer must show both use in commerce in connection with specific goods or services and use in a trademark way. As counsel for IJR complained during oral arguments, “I don’t know what a Krusty Krab is. I don’t know what you can buy from a Krusty Krab.” The mere fact that the Krusty Krab appears in SpongeBob and millions of consumers are aware of it is insufficient to establish trademark rights in KRUSTY KRAB—trademark rights require use as a mark in connection with goods or services that move in interstate commerce, which the district court failed to assess.

IJR appealed, arguing genuine issues of material fact exist as to whether Viacom owns a valid trademark. Indeed, the Fifth Circuit acknowledged that “often the court has bypassed the use inquiry and conducted only a distinctiveness analysis”; Viacom needed to demonstrate that “the Krusty Krab mark, as used, will be recognized in itself as an indication of origin for the particular product or service.”

The Fifth Circuit opinion attempts to remedy these defects by addressing the threshold validity questions with greater care. It holds that Viacom meets the use in commerce requirement, highlighting the goods that licensees sell using the KRUSTY KRAB mark, including playsets, aquarium accessories, stickers, and a videogame. It also holds that Viacom makes use as a mark, because “on most of those [licensed] products, The Krusty Krab is featured prominently and contributes in identifying the good… The Krusty Krab creates a distinct commercial impression signifying to consumers that products like Krusty Krab playsets or aquarium ornaments originate from the famous fictional restaurant that employs their beloved sea sponge character.” While I’m not entirely convinced that the use made on items like a Krusty Krab Lego set reflect use of the phrase as a mark, nor that the perception that goods “originat[e] from [a] fictional famous restaurant” satisfies that requirement, the Fifth Circuit’s analysis is at least more rigorous than that of the court below.

While its finding that Viacom possesses valid trademark rights rests partially on the company’s licensees’ use with merchandise, the court expounds at some length about what it terms a “threshold question: Can specific elements from a television show—as opposed to the title of the show itself—receive trademark protection? We conclude that they can.” The court cites its own precedent in the Conan the Barbarian case and the Second and Seventh Circuit’s General Lee cases for the idea that “trademark protection may be granted to certain characters, places, and elements of a broader entertainment entity.” It asserts that in determining whether Krusty Krab is used as a mark, “the focus is on the role that the element plays within the show.” And it concludes that based on the fictional restaurant’s “central role” in the SpongeBob franchise, which includes the television show, movies, app, advertisements, and social media presence, the Krusty Krab serves as an indication of origin for Viacom’s programming. How can the court assess secondary meaning in an “element” without tethering it to specific goods or services? Its recitation of the test allows for meaning that’s more diffuse and not tied to a particular set of offerings, defining secondary meaning as “whether consumers associate The Krusty Krab only with Viacom.” The Fifth Circuit thus has its krabby patty and eats it too, deeming KRUSTY KRAB a valid trademark for both tangible goods and “television services” based on its role in SpongeBob’s universe.

The court next takes up the question of distinctiveness, affirming the finding of the court below that KRUSTY KRAB possesses acquired distinctiveness. It walks through several secondary meaning factors and finds that Viacom’s extensive use of KRUSTY KRAB on television, in movies, in advertising, and in connection with licensed merchandise, along with the volume of sales, press coverage, and promotional expenditures indicating consumers’ exposure to that use, “lead inescapably to the conclusion” that the mark has acquired distinctiveness. In its brief, IJR objected that it’s impossible to assess the distinctiveness of Viacom’s supposed trademark for specific goods or services since Viacom hadn’t bothered to tell the court or IJR what it used KRUSTY KRAB as a trademark for. While the court seems to focus more on Viacom’s investment in expressive works that feature the fictional crab shack prominently and less on the ad expenditures and sales of tangible goods, the distinctiveness finding—like the validity finding— rests both on the court’s analysis of secondary meaning for the “recurring element” and the more traditional use on branded products.

Finally, the court turns to its likelihood of confusion analysis, affirming the district court in finding a likelihood of confusion as a matter of law. To get there, the circuit court focuses sometimes on the tangible goods manufactured by Viacom’s licensees and other times on the more diffuse (porous?) concept of the KRUSTY KRAB mark as an element in a fictional universe. When it assesses the similarity of retail outlets, the court considers the licensed merchandise. But when it turns to factors such as the similarity of the goods or services, zone of expansion, and identity of advertising media, it bases its analysis on the Krusty Krab as an element featured in SpongeBob. Most problematic are statements like “both marks already identify restaurants.” Based on the court’s own validity and distinctiveness analyses, Viacom possesses trademark rights for THE KRUSTY KRAB in connection with lots of things, but restaurants aren’t among them. Certainly a likelihood of confusion can exist even where both parties use their marks in connection with different goods and services. But expanding Viacom’s rights in this way and eliding the distinction between real use and fictional use undermines the court’s earlier assessment.

The court also short-circuits the strength factor in its likelihood of confusion analysis with a conclusory statement that “Viacom’s mark is strong because it has acquired distinctiveness through secondary meaning.” Strength is rarely a binary determination, and it typically takes into account both inherent and acquired distinctiveness; here, the court’s cursory treatment would not conceive of a mark that has enough secondary meaning to garner trademark protection but is nonetheless weak. Why does it skip an analysis of inherent distinctiveness? Perhaps because conducting one requires explicitly considering the mark as applied to specific goods and services, which the court is crabby about.

On actual confusion, the court reviews Viacom’s survey, which showed “30% of respondents thought The Krusty Krab was connected with Viacom and 35% of respondents associated the hypothetical restaurant with Viacom.” While IJR challenged the survey’s validity and the Fifth Circuit acknowledges its flaws, its findings do not surprise me. Given the existence of Bubba Gump Shrimp, which the court references several times, and trends in entities capitalizing on popular fictional worlds with merchandise and other forms of entertainment, it seems possible and perhaps likely that some consumers would expect a restaurant called “The Krusty Krab” to bear some connection to SpongeBob because of their awareness of a fictional restaurant by that name. (Would you?)

While deception without registered or common law trademark rights is actionable under 43(a), this decision purports to rest on such rights. Yet those trademark rights are sometimes anchored to nothing more than use in a cartoon world under the sea. Assigning real trademark protection to fake restaurants without directly addressing the discrepancy is nautical nonsense.