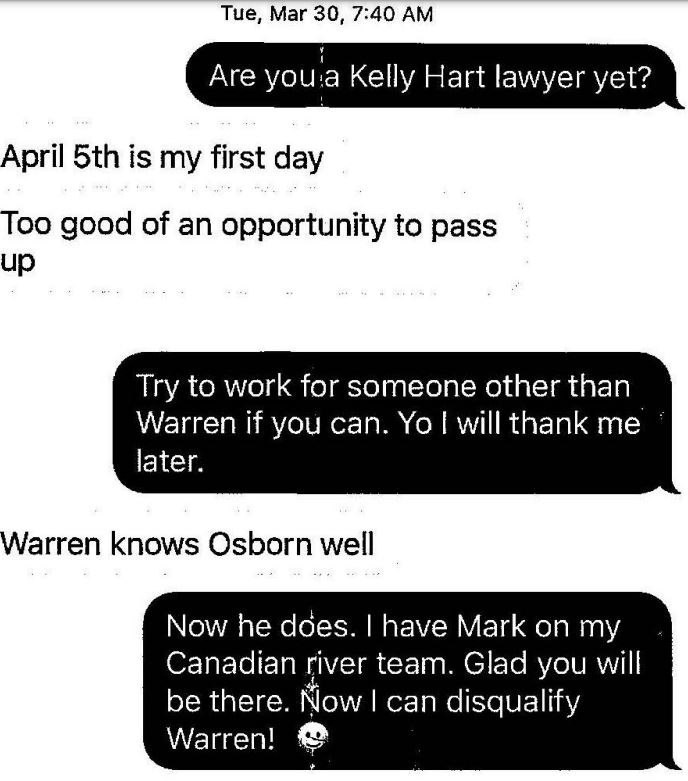 The image quality isn’t ideal, but the emoji at the end is a smiley.

The defense firm sought to disqualify the plaintiff firm because of the imputed conflicts from the newly hired associate. The judge denied the disqualification order. The appellate court affirms.

The defense firm argued that the above text exchange warned the associate about the potential disqualification. The appellate court sees it differently:

Slavin’s alleged “warning” about disqualification was followed by a smiley-face emoji, which is prone to multiple interpretations. [cites to Microstrategy v. Bus. Objects; U.S. v. Christensen; Apatoff v. Munich Re; Dean v. REM Staffing; Arnold v. Reliant Bank; In re Oladiran]…It is possible that the emoji was indeed intended to soften the blow of Slavin’s warning about the disqualifying consequence of working for Kelly Hart. But in context, the trial court could have conceived at least three other reasonable interpretations:

The appellate court doesn’t pick among these interpretations. It merely needed to find that the lower court’s decision wasn’t clearly wrong, which the range of plausible smiley meanings demonstrates.

In my talk about emojis and the law, I make the point that smileys are indeed capable of multiple interpretations–indeed, the same smiley symbol might be used by the same sender for multiple meanings in the same post. I also point out that smileys always have the capacity to indicate that the associated text was sarcastic, in which case the smiley can flip the text’s meaning. That makes a simple smiley an indispensable part of every conversation where it appears, because it might be reversing the meaning of the text around it. That’s another reason why I hate it when courts don’t display the emojis in their opinions, because the emojis might be adding a lot of meaning to the conversation. Fortunately, this court showed us what it saw.