Texas and Its Amici Try to Justify Censorship in Their NetChoice v. Paxton Fifth Circuit Briefs

As you recall, in December, a federal district court enjoined most of HB 20, Texas’ so-called “social media censorship” law. As expected, Texas appealed the ruling to the Fifth Circuit. This blog post recaps the Texas brief and the 11 supporting amicus briefs. A case library is at the end.

Reminder: HB 20 claims it is a “social media censorship” law. Texas and its amici argue that social media services engage in “censorship” when they exercise editorial discretion over third-party content. Opponents, including me, argue that the law’s title is unintentionally accurate, because the law–through government compulsion–“censors” social media services by overriding their editorial discretion. If you believe a private publisher cannot illegally “censor” third-parties because only the government “censors,” then the arguments from Texas and its amici will sound both stupid and hypocritical (i.e., the solution to “censorship” by private publishers is for government to censor those private publishers…?).

If true, that representation would be a massive concession by the plaintiffs–but they didn’t make it. I pulled ROA.1306 (highlight added): 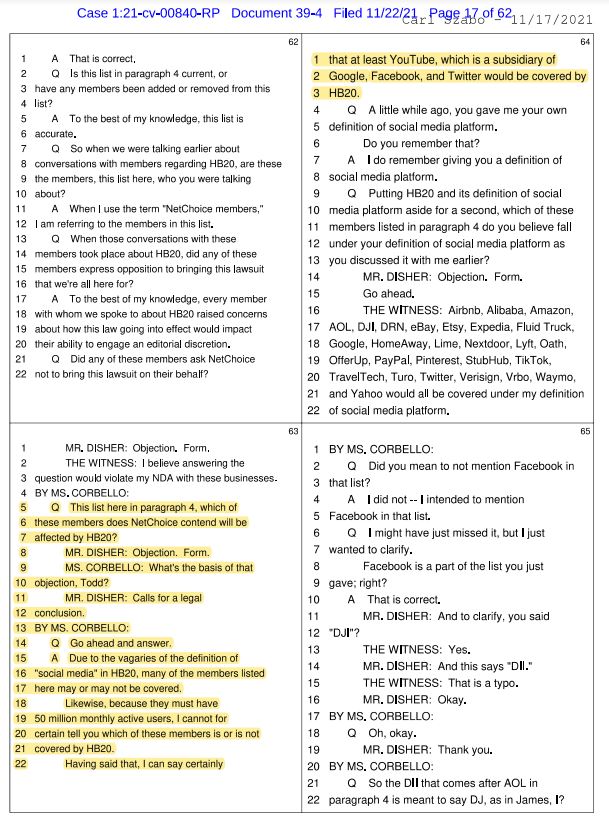 This is Texas’ deposition of Carl Szabo, NetChoice’s general counsel. Texas’ counsel asks him which NetChoice members are governed by HB20. He (correctly) responds that, due to the vague statutory definitions, “many” of NetChoice’s members “may or may not be covered.” He then says that “at least” YouTube, Facebook, and Twitter are covered by the law.

Why does this lie matter? The state’s false claim has several benefits to its litigation posture, including:

If I were a judge and I learned that a litigant had grossly mischaracterized evidence like this, I would be very, very angry. This deceit is well outside ordinary bounds of zealous advocacy.

Some other standout parts of the brief:

The brief says: “HB 20’s anti-discrimination rule is just one item from the menu of regulations that a state can impose on the Platforms under this historic, well-grounded common carriage framework.” 🚨🚨🚨 They are saying the quiet part out loud. This is a clearly stated and unambiguous warning of regulators’ future intent. If a state can get social media services characterized as “common carriers,” every legislature can, and will, regulate virtually every aspect of social media enterprises without First Amendment limits. You know what other countries can regulate social media without restriction? Russia, China, Turkey, etc. Having seen how Russia and China virtually eliminated free expression on social media, and knowing that Texas and other states think that’s GOALZ, this lawsuit’s stakes couldn’t be higher.

The brief characterizes the law’s anti-discrimination provision as a “hosting rule.” This is ambiguous because the law doesn’t compel services to host content at all. More importantly, most of HB 20 restricts how services promote content. Does the state’s emphasis on the so-called “hosting rule” mean the state is abandoning its defense of the law’s content promotion restrictions? If so, I hope the panel will expressly acknowledge those concessions.

The so-called “hosting rule” is indefensible because “hosting” and “publication” are the same thing, so mandating “hosting” and mandating “publishing” are the same thing. To get around this problem, the state argues that mandatory hosting only regulates conduct, not content: “Laws requiring commercial entities to neutrally host speakers generally do not even implicate the First Amendment because they do not regulate the host’s speech at all—they regulate its conduct.” This is a well-used but always corrupt pro-censorship tautology, i.e., “We’re not regulating what content the defendant publishes. We’re just regulating their conduct of publishing content,” as if those are different things.

With respect to HB 20’s transparency obligations, the state claims: “Disclosure rules that require commercial enterprises to convey truthful information to the public about their products almost never offend the First Amendment. We live surrounded by the upshot of that reality everyday—with calorie counts, warning labels, SEC disclosures, and the like.” As I explained in my Mandating Editorial Transparency article, this frequently advanced argument makes a false equivalency because general commercial disclosures are qualitatively different from mandatory editorial disclosures. An excerpt from my article:

When a general disclosure law prompts a company to change its behavior (which sometimes is the legislature’s hope or intent), those changes don’t necessarily impact the company’s speech outputs. For example, if a food-labeling law induces a food manufacturer to modify the amount of saturated fat or sugar in its product, the product change did not affect the manufacturer’s freedom of speech. In contrast, if an editorial transparency law causes a publisher to change its editorial practices, then the law has speech effects that are absent in ordinary product configuration decisions. Indeed, the legislature may expressly intend for the mandatory editorial transparency law to motivate the publisher to change its speech.

I’ll close my discussion about the state’s brief by noting some atmospherics:

[Note 1: if the NetChoice v. Moody 11th Circuit appeal provides a preview, the Knight First Amendment Institute will file an amicus brief nominally supporting the appellees, but very much against the appellees’ interests.]

[Note 2: three of the amicus briefs are from people affiliated with Columbia University–over 1,700 miles away from Austin, Texas. There must be something (bad) in the water uptown.]

[Note 3: I counted 21 lawyers listed as amici counsel (one brief, Goldstein’s, filed pro se). Of the 21 counsel, 19 appear to be men. The four individual amici (Goldstein, Hamburger, Landry, and Mamet) are all men too. I didn’t attempt to reverse-engineer the racial composition of amici counsel, but I have a hunch what that breakdown would reveal.]

Babylon Bee, Giganews, and Others. This team has previously filed error-riddled amicus briefs in the lower court and the Florida litigation. Some errors in this brief:

Center for Renewing America/Claremont Institute. The Claremont Institute center is associated with John Eastman, and he’s listed as a counsel on this brief. You may recall that Eastman provided Trump with a roadmap of how to overthrow our democracy. As soon as I saw his name, I stopped reading the brief.

Leonid Goldstein. A pro se brief. It’s as lucid as you’d expect from a non-lawyer who thinks HB 20 is swell.

Prof. Philip Hamburger. A Columbia University Law professor. He’s based in NY but claims “he looks to the Texas social media law to preserve at least one jurisdiction that is free from viewpoint discrimination by the major social media platforms.” Unless he’s planning to lateral to a Texas law school, I’m not sure how he benefits from that? Some other lowlights from his brief:

Heartland Institute (“known for its rejection of the scientific consensus on climate change and the negative health impacts of smoking“)/American Principles Project (they also favor a return to the gold standard). This brief makes the stupid argument that all plaintiffs are judicially estopped from claiming that their content moderation decisions are protected by the First Amendment based on the litigation positions some services have taken in Section 230 litigation.

Dr. Donald Landry. A Columbia University medical professor. Citing to the Church’s treatment of Galileo, he says “the censorship of outlying scientific ideas is a profound danger for science and ultimately our society.” Some examples he thinks are comparable to the Church’s suppression of heliocentrism:

Apparently, the best way to advance medicine is to not exercise editorial discretion to reduce bad medical information, even if it kills a lot of people….? I guess don’t understand the Hippocratic Oath.

David Mamet. An excellent example of why people should stick to their swimlanes. Techdirt’s deconstruction.

Moms for Liberty and Institute for Free Speech. Candeub Candeubing after the district court bounced his so-called “expert” report for making legal arguments.

The Texan. As a traditional news publisher, the Texan admits it isn’t covered by HB 20, so exactly what is it doing here? Railing against Section 230, of course: Plaintiffs “seek Section 230 protection and First Amendment protection and zero additional legislatively imposed burdens. The Court should decline to build them this legal Eden….if Congress could impose the viewpoint and policy requirements via Section 230, then there is no constitutional bar to Texas doing so via H.B. 20.” [Any number of GIFs could be appropriate here. I’m partial to the Nathan Fillion speechless GIF.]