This is the most interesting Internet personal jurisdiction opinion I’ve read in years. I know that sounds like damning with faint praise, because many of you cannot find much enthusiasm about any jurisdiction ruling. Well, get excited about this one. If this opinion isn’t overwritten by further appeals, I’m likely to include it in my Internet Law reader as the principal case on jurisdiction–which would be the first time I’ve changed my principal cases on jurisdiction in a decade. 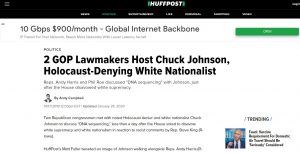 The case involves Charles Johnson, who previously lost a case trying to treat Twitter as a shopping mall. The majority recaps the facts in this case:

Charles Johnson says the Huffington Post (“HuffPost”) libeled him by calling him a white nationalist and a Holocaust denier. He sued HuffPost in Texas. HuffPost is not a citizen of Texas and has no ties to the state. But its website markets ads, merchandise, and ad-free experiences to all comers

The majority says this case is easily resolved by its 2002 Revell precedent (a progeny of the legendary, and legendarily bad, 1997 Zippo precedent):

Our decision in Revell requires dismissal. HuffPost is interactive, but its story about Johnson has no ties to Texas. The story does not mention Texas. It recounts a meeting that took place outside Texas, and it used no Texan sources. Accordingly, we lack jurisdiction over HuffPost with respect to Johnson’s libel claim….

Interactivity reflects only a website’s capacity to avail itself of a place. Sites that solicit information, purchases, and ad clicks from their viewers can more easily reach into a forum and cause injury there than can sites that do not. But just because a site can exploit a forum does not mean that it has or that its forum contacts produced the plaintiff’s claim. Those requisites must be satisfied even where all the defendant’s ties to the forum are virtual

Though the majority doesn’t say so explicitly, this passage is a major and much-needed repudiation of Zippo. Zippo has many flaws, including that it doesn’t require the courts to show that the defendant’s “forum contacts produced the plaintiff’s claim.” The majority fixes that. If courts have to make that connection, the Zippo test adds nothing to the analysis, so it can be tossed into the trash where it belongs.

The majority says it could have stopped here. Instead, the majority makes several additional important moves.

The majority seeks to limit the jurisdictional exposure of “universally accessible” websites. For example:

the only reason to hale HuffPost into Texas is that Texans visited the site, clicking ads and buying things there. But as far as Johnson has alleged, those visits reflect only HuffPost’s universal accessibility, not its purposeful availment of Texas. Accessibility alone cannot sustain our jurisdiction. If it could, lack of personal jurisdiction would be no defense at all…

None of the alleged ties with Texas gives HuffPost fair warning that it should expect a libel suit there. Making a website that’s visible in Texas, of course, does not suffice…Grannies with cooking blogs do not, and should not, expect lawsuits from Maui to Maine.”

As further repudiation of Zippo, the majority says that an e-commerce retailer can’t always be sued in the plaintiff’s home court:

Johnson says that HuffPost sells merchandise to Texans. But that doesn’t matter. Johnson complains about a written article, not articles of clothing. Branded tees and coffee mugs have nothing to do with Johnson’s libel claim

Similarly, the majority limits where ad-supported websites can be sued:

Johnson alleged two ad-based ties with Texas. First, HuffPost displayed ads from Texas-based advertisers. Second, it used visitors’ location data to tailor advertising to them. So when the site detects that a user is visiting the site from Texas, advertisers may use that data to generate a relevant ad—such as the “Attention Texas Driver!” ads that no one clicks. [Eric’s note: maybe the judge doesn’t click on those ads, but someone does…]

The first tie is irrelevant. Johnson’s libel claim arises from the story declaring him a white-nationalist Holocaust denier. It does not stem from or relate to HuffPost’s ads or the citizenship of those placing them…The second tie has the same problem. Selling ads is no different from hawking tees and mugs. Those sales neither produced nor relate to Johnson’s libel claim. That relatedness problem remains even if HuffPost used location data to tailor ads to each visitor.

There is another barrier: The place from which a person visits HuffPost’s site is entirely beyond HuffPost’s control. Johnson never says that HuffPost reached beyond the site to attract Texans to it or to the story about Johnson. He does not say, for example, that HuffPost aimed the alleged libel at Texas through geotargeted ads on Facebook or Google. Instead, he alleges only that HuffPost showed unrelated ads to those already visiting its site….Because Johnson does not allege that HuffPost solicited Texan visits to the alleged libel, we cannot conclude that those visits are HuffPost’s purposeful contacts with Texas. Instead, those visits reflect the “unilateral activity” of persons in Texas typing “huffpost.com” into their web browsers and pressing “Enter.” “

I love this vision of reader agency. Users make the affirmative decision to consume a website’s content. So many courts treat users as passive automatons coerced by websites into taking actions against their interests. Having said that, most courts reject this model of user agency. Instead, courts routinely treat websites as responsible for the user engagement they seek.

Johnson protests that ads are how HuffPost makes money. But whether HuffPost generates revenue by selling ads, tees, or chewing gum is beside the point….What matters is whether HuffPost aimed the alleged libel at Texas. Third-party ads on HuffPost’s site reflect no such aiming. They neither caused nor relate to the harm that the story caused. They do not drive Texans to the site or even to the alleged libel. Instead, they direct Texans away from the site, to third-party advertisers. And HuffPost shows ads to all comers; it treats Texans like everyone else. To target every user everywhere, as those ads do, is to target no place at all….HuffPost need not block Texans from visiting its site, receiving relevant advertising, or buying T-shirts to escape the ability of Texas courts to hear Johnson’s libel claim

The majority implicitly rejects that websites have an obligation to adopt geoblocking technology and will be responsible for jurisdiction in any locations they don’t affirmatively block.

The majority summarizes this part of the discussion:

Exercising jurisdiction over HuffPost would collapse the distinction between specific and general jurisdiction. If marketing ads, merchandise, and ad-free experiences to all visitors can create jurisdiction over a website with respect to an unrelated libel claim, we can imagine few claims against a website that would fall beyond the reach of “claim-specific” jurisdiction

Zippo absolutely collapsed the distinction between specific and general jurisdiction. It’s good to see the court recognize and reject that.

The majority then does an Internet exceptionalism analysis. (The dissent, not unfairly, points out that the majority inconsistently flips between embracing and rejecting exceptionalism). The majority distinguishes the old Supreme Court Keeton v. Hustler precedent, which involved jurisdiction in a state to which the magazine delivered tens of thousands of hard copies:

Sending tens of thousands of magazines to a state is an affirmative act that displays the publisher’s specific intent to target that state with what the magazines contain….websites are different. To circulate a print magazine, the publisher must send it somewhere. But websites are “circulated” to the public by virtue of their universal accessibility, which exists from their inception. That’s why clicks, visits, and views from forum residents cannot alone show purposeful availment. They are not evidence that “the defendant has formed a contact with the forum state.”

This again validates reader agency. Websites are automatically available in all jurisdictions unless the law forces them to do something different, while physical copies must be affirmatively shipped to a jurisdiction. The majority continues:

the dissent urges that we have power over HuffPost because it erected a website where Texans can visit and click ads. Accepting that position would give us unlimited jurisdiction over virtual defendants—and not just our cooking-blog granny. A rising YouTube star enables advertising on his channel, then libels someone in a video he posts there. If the dissent is right, all fifty states may hale him into court to answer for it. But our law is clear that more is needed to protect due process. How much more is a question for another day

In a footnote, the court emphasizes the Internet exceptionalism point:

Creating a website is not like erecting billboards in all fifty states; that act cannot give every place power to hear claims about what the website displays. For that reason, it makes more sense to see a website as a physical site or store where the defendant resides. The defendant surely can expect suit there and elsewhere he purposefully targets with the conduct that induces the plaintiff’s suit.

I like it, but I don’t believe it. You may recall the Hemi case, where an e-commerce retailer set up shop on tribal lands and didn’t charge the applicable cigarette taxes because it claimed the sale took place physically on tribal lands. The Seventh Circuit had no problem rejecting that argument because of the affirmative act of shipping physical items outside of tribal lands. The majority would have been better off skipping this offline analogy.

To recap, the majority reaches all of the following points:

None of these rulings, by itself, are unprecedented, but this opinion rejects many of the plaintiffs’ standard arguments together in a clear and understandable package. The fact that it’s someone like Chuck Johnson on the losing end is a bonus.

There is a spirited dissent that adopts a more expansive approach to online jurisdiction:

HuffPost has fulsome circulation in Texas, and its presence in Texas was not “random, isolated, or fortuitous.” Far from it: HuffPost actively exploited the forum through Texas-specific advertising….HuffPost is not accidentally found in Texas but is actively seeking Texas readers and, more importantly, the money from advertising to them. It benefits from its Texas readership through money made off of Texas-specific advertising; if it does so in Maui as well, so be it. It is not an accident that Texans can access HuffPost, and the approach HuffPost takes towards Texas is the modern equivalent of Keeton sending magazines to New Hampshire. This case does not involve the individual author or a “grannie” who talks virtually to her friends in other states.”

So the dissent apparently is fine with HuffPost being sued anywhere it’s geolocating ads, which is likely everywhere. In other words, the dissent would honor the plaintiff’s choice of forum. I think the majority reaches the better result.