YouTuber Doesn’t Qualify as a Member of the “News Media”–Green v. Pierce County 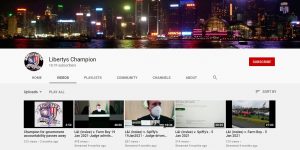 Green runs a YouTube channel called “Libertys Champion” (with 18k subscribers now). Green had a scuffle with a Pierce County security guard, so he submitted public records requests to obtain more information about the county’s security force. The county provided some records but not everything Green requested. Green claimed he was entitled to the remaining records because he qualified as a member of the news media. Unsatisfied with the county’s response, he sued for access. The district court ruled in his favor. The Washington Supreme Court disagrees.

The statute defines “news media” to include:

Any newspaper, magazine or other periodical, book publisher, news agency, wire service, radio or television station or network, cable or satellite station or network, or audio or audiovisual production company, or any entity that is in the regular business of news gathering and disseminating news or information to the public by any means, including, but not limited to, print, broadcast, photographic, mechanical, internet, or electronic distribution

This definition is showing its age. In the old days, “news media” were fairly easy to identify because they required significant physical capital. As a result, the key word is “entity.” The majority says “the word ‘entity’ must be interpreted to embrace something that is similar in nature to the specific types of traditional news outlets listed in the statute. The list includes only organizations. It does not include individuals….A YouTube channel run by an individual does not meet the statutory definition of ‘news media.’” In a footnote, the majority adds “Libertys Champion is not ‘news media’ simply because it has a YouTube channel and regularly posts content.”

Emphasizing its corporatist views, the majority says in a footnote: “there are no freedom of the press implications if there is no news media.” This takes an unduly narrow view of the “press,” because in the modern era the “press” should include unaffiliated individual journalists. It also makes no sense to conflate a statutory definition of “news media” with the constitutional definition of the “press.”

A dissenting judge says that “distinguishing different news media based on size or organizational structure or status as a legal entity is disfavored, if not outright impermissible.”

The majority acknowledges how the statutory definition may be antiquated:

The evermore constant use of social media to access news demonstrates our increased reliance on and trust in social media, and it requires careful vetting to ensure that the news and stories we find are accurate. The manner in which we access news today is vastly different from how we did it in 2007, and this statutory definition may not comport with the current intersection of social media and the news

For reasons that weren’t clear to me, neither opinion discussed the possibility that Green acted as a “sole proprietor” of his YouTube business. A sole proprietorship often qualifies as a legal “entity,” in which case the majority’s legal standard should have favored Green.

This opinion brought to mind two early Cyberspace Law cases from 1995. In Stern v. Delphi, the legal question was whether Delphi, an online service, qualified as a “news disseminator” for purposes of the publicity rights law (the court said yes). In It’s In the Cards v. Fuschetto, the question was whether an online message board constituted a “publication” for purposes of a defamation statute which required pre-lawsuit retraction demands to “publications” (the court said no). Those cases, and this one, force us to ask tough policy questions about when and why legislatures should privilege media enterprises over other defendants. As the entire architecture of the news industry and journalism has changed radically, we don’t have good principled ways of defining media enterprises sufficient to ensure the privileges won’t be misused. For example, this definitional challenge arises in every legislative attempt to create ancillary copyrights or otherwise force Google and Facebook to shovel some money towards the media.

This case also reminds us that legislatures (and the civil law approach generally) routinely create avoidable statutory interpretation challenges that get exposed as technology evolves. Legislatures should try harder to avoid technology-based statutory distinctions that won’t age well. Yet, even today, state legislatures are making the exact same drafting mistakes in their mania to regulate Big Tech.