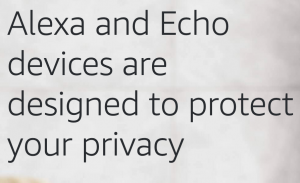 Minors allege that Amazon’s Alexa service improperly stores or utilizes their voiceprints. The district court denied Amazon’s request to force arbitration of the claims based on the fact that the plaintiffs, who were minors, were not signatories (or had not agreed to) to the terms of service for the Alexa device. There is no dispute that if the parents had brought the claims, their claims would be subject to arbitration.

The district court held that as non-signatories, Amazon can’t force the minors to arbitrate their claims. The Ninth Circuit affirms in an unpublished opinion. The key question under Washington law is whether the minors are asserting claims arising out of the agreement [citing to Townsend v. Quadrant Corp.]. If the minor plaintiffs were asserting contract-based claims, then they would be taking advantage of the underlying contract and would be subject to “equitable estoppel” (and would be forced to arbitrate their claims despite being non-signatories). Here, they assert statutory claims that arise independently of the terms of service so this rule does not apply.

Amazon also argued that it should be allowed to invoke the “close relationship” theory of estoppel. The court says Washington courts do not appear to have recognized this theory to compel arbitration.

Amazon does not have to face discovery just yet. It should have an opportunity to file a motion to dismiss or a responsive pleading that tests the legal sufficiency of the allegations.

It’s disappointing to see the Ninth Circuit take the route of issuing an unpublished opinion. I don’t know how the complexity of the case’s legal question figures into the court’s decision to take this route. This doesn’t fall into the category of a simple/straightforward case. Indeed, the court notes that the Washington State Supreme Court’s ruling in Townsend (and the line-up of opinions) has “caused some confusion in this case.” I’m surprised no one pressed for certification to the Washington State Supreme Court.

The blog post on the district court’s ruling is here: “Amazon Can’t Force Arbitration of Minors’ Privacy Claims Based on Alexa Recordings–BF v. Amazon”. As noted by Eric there, this result is bad from a contract law standpoint: “it would be weird to block the parents’ lawsuits per the contract but allow the parents to advance the exact same claims using their children as proxies.” On the other hand, from a privacy standpoint, it’s a thorn in Amazon’s side that could contribute to Amazon being more careful about its privacy practices.