[Reminder: our country is falling apart. Focus on that until the election, then revisit this post.]

My Emojis and the Law paper argued that: (1) the diversity of emoji depictions (sometimes called fragmentation) creates potential misunderstandings that cause a host of novel and thorny legal issues, and (2) depiction diversity is the unwanted and unnecessary consequence of intellectual property protection for individual emoji symbols. This lawsuit, Cub Club Investment v. Apple in the Western District of Texas, shows how this dynamic can play out, to the detriment of us all.

[The next paragraph summarizes allegations in the complaint, which remarkably has 5 lawyers who willingly signed it. The lead counsel is Patterson & Sheridan, a well-known patent law firm. As far as I could tell, none of its 4 lawyers mention the word “copyright” anywhere in their firm bios. The 5th lawyer doesn’t appear to have a functional website].

This lawsuit relates to the “iDiversicons” app, launched in 2013, which helps users add racially diverse depictions to their emojis. This led to several copyright registrations for things like “emojis with 5 skin tones.” In 2014, the iDiversicons principal engaged with the Unicode Technical Committee and Apple about better racial emoji inclusiveness. She now claims that Apple copied her work. (Apple first made an allegedly infringing release in 2015. Another reminder that copyright’s statute of limitations has failed).

The complaint provides some examples of the alleged copying: 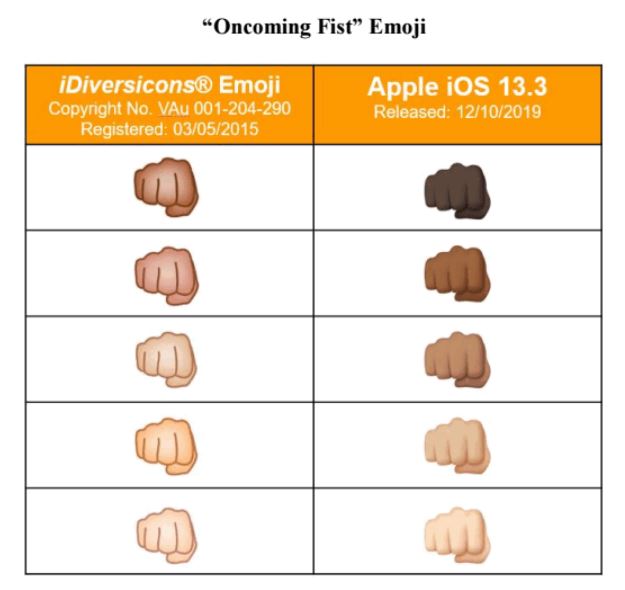 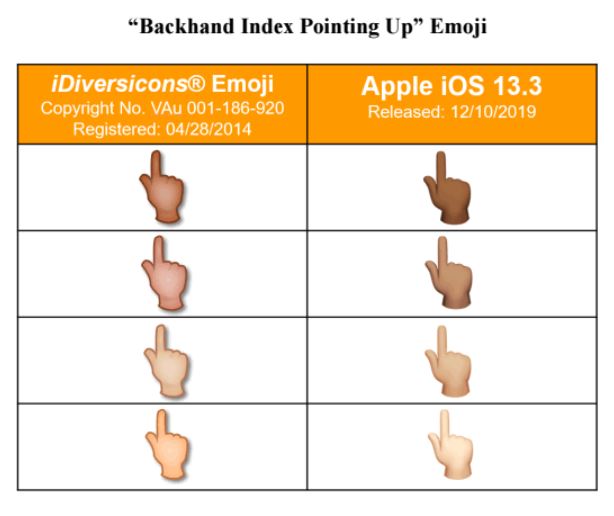 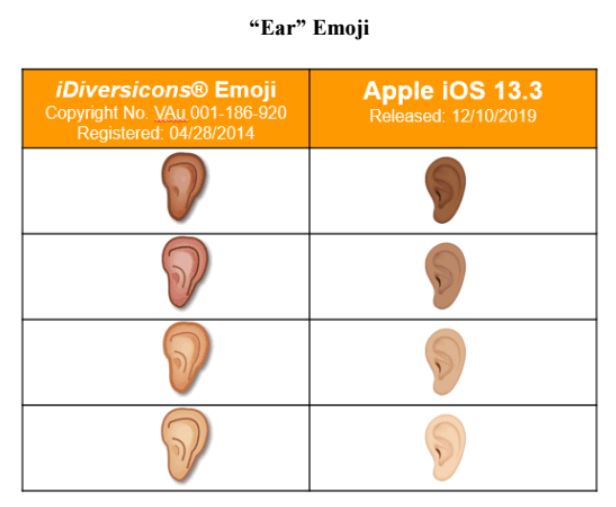 Apple’s depictions have immaterial minor deviations from the iDiversicons precedents, such as how the thumb is more separated in the backhand index finger depictions, or how the ear detail is more lifelike in Apple’s. Further, the color shadings are noticeably different–for example, with the oncoming fist depictions, Apple’s shadings are categorically darker. Otherwise, many similarities trace back to Unicode’s representative glyph and standard emoji conventions. Emojis are often visual metaphors, and there are limited ways to successfully express the metaphor.

Emoji designers have restricted toolkits to depict emojis while remaining consistent with Unicode and the visual metaphor conventions. Apple appeared to use those limited tools. As a result, the lawsuit seems to challenge Apple for copying the concept of depicting racial skintones in emojis. As the complaint asserts, “Apple’s actions also significantly harm innovation and America’s progress in diversity and inclusion.” Huh? What? How? To me, this lawsuit could be an example of emoji trolling. Emojis are an excellent device for trolling campaigns because they inevitably look alike and copyright law provides many powerful tools to copyright owners. (The complaint also contains a trade dress claim for the emoji keyboard which is even more dubious due to functionality, secondary meaning, and other limiting principles).

If this case lasts that long, I hope it will set favorable precedent for emoji IP law. In my paper, I argued that judges should provide narrow protective scope for individual emoji depictions–at most, only restrict verbatim reproductions, but preferably conclude that emojis are not protectable at all because emoji fragmentation hurts us all. Indeed, what did we want Apple to do differently here? We don’t actually want emoji designers to add variations, and we can’t let the first emoji designer force all subsequent emoji designers to adopt inferior implementations to avoid any IP risks.

At the same time, I note that Apple has registered hundreds of copyrights in individual emoji depictions. This copyright registration blitz showed the rest of the world how to overclaim copyright in those depictions, and indeed Apple has forced others off of its emoji depictions. So there is a little irony to this lawsuit.

Instead of exacerbating IP battles over emojis, Apple could and should broker an industry détente on emoji IP. One radical but satisfying step would be for Apple to place its emoji depictions to the public domain. That could reduce wasteful design efforts to navigate around emoji IP, and it would abate harmful emoji fragmentation that degrades emojis’ communicative functions.