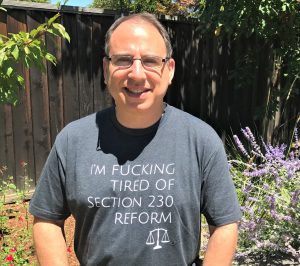 I’m blogging yet another terrible Section 230 reform proposal: S. 4534, the ‘‘Online Freedom and Viewpoint Diversity Act’’ (introduced by Sens. Wicker, Graham, and Blackburn), which has been rolled into S. 4632, the “Online Content Policy Modernization Act.” Despite the urgent existential crises engulfing our country, Sen. Graham has fast-tracked a markup on S. 4632 for tomorrow. South Carolina voters: how can you stand for this?

Why is Sen. Graham so motivated to gut Section 230? How do these efforts benefit his  constituents? What other urgent topics should his office prioritize instead?

Summary of the Anti-Section 230 Provisions

The Online Freedom and Viewpoint Diversity Act, and the anti-Section 230 part of S. 4632 (the substance is the same), would modify Section 230:

In other words, the bill would:

Why This Bill Is Terrible

Like other Republican attacks on Section 230, the bill wants Internet services to act as “passive” receptacles for users’ content rather than content curators or screeners of “lawful but awful” third-party content. These efforts are stupid because we need less garbage content on the Internet, not more. Section 230 lets Internet services figure out the best ways to combat garbage content, and many services have innovated and invested more in improving their content moderation functions over the past few years. Why would Sen. Graham want to suppress those efforts?

Increased Liability for Removing Troll Content? Simply put, this bill is pro-troll. It discourages Internet services from removing “lawful but awful” content. Right now, Internet services qualify for Section 230(c)(2)(A) if they remove content that they subjectively believe is “objectionable.” (Note: services actually rely on Section 230(c)(1), which is even more deferential to services’ editorial discretion). The revised Section 230(c)(2)(A) would provide the safe harbor only if the service has an “objectively reasonable” belief that such content is “unlawful.”

So what’s in that delta? What content is protected by Section 230(c)(2)(A) today wouldn’t be protected if the bill passed? Some examples:

None of this content is unlawful; indeed, the First Amendment applies to all of it. Yet, we want Internet services to actively fight garbage like this. Instead, the bill would make garbage content  functionally untouchable.

Note that the bill doesn’t ensure liability for removing “lawful for awful” content. It just removes Section 230’s protections against lawsuits over such removals. Those lawsuits should eventually fail due to the TOS provisions, the First Amendment, or other legal limits. Indeed, toughened TOS language should prevent lawsuits from users whose content/account is removed. Nevertheless, we already see lots of lawsuits over content/account removals, despite their obvious futility per Section 230(c)(1). Remove the Section 230 fast-lane for disposing of such cases, and every removal decision becomes a vexing calculus about whether Section 230(c)(2)(A) would apply and how much it would cost to defend the inevitable lawsuits.

Further, actual lawsuits would cost much more because Section 230(c)(2)(A) defenses could not succeed on a motion to dismiss. Plaintiffs usually will be entitled to engage in expensive discovery on whether the service had an “objectively reasonable” basis for the removal. Internet services already avoid relying on Section 230(c)(2)(A) because it costs too much to litigate the “good faith” requirement. The bill would explode these defense costs, and that would cause services to leave up more garbage content to minimize costs.

What is “Editorializing”? The bill could be read to say that a single incident of editorializing by a service permanently forecloses its Section 230 protection forevermore. I assume (?) that’s not what the drafters meant.

OK, so when does a service “editorialize” third-party content? The bill surely targets Twitter’s fact-check of Trump’s tweeted lies. However, unless a single fact-check cuts off Section 230 permanently, Twitter doesn’t really need Section 230 protection for Trump’s tweets because they aren’t likely to expose Twitter to any liability. Twitter would almost certainly be legally protected by the First Amendment and other legal doctrines for Trump’s content, even without Section 230. So this bill counterproductively isn’t likely to discourage Twitter from fact-checking Trump.

Furthermore, discouraging fact-checking is stupid. We need Internet services to do more to combat lies and misinformation. See, e.g., Facebook’s efforts to identify and label state-sponsored media, or the various interstitial warnings that social media services interpose for adult or graphic content. If they are willing to do that work, we should praise them, not punish them.

“Editorializing” could mean much more than fact-checking. Would it apply every time an Internet service provides any subjective characterization of third-party content? e.g., highlighting “most downloaded” or “hot” items. If so, the bill would reduce navigational aids or other metadata that improves users’ experiences.

Whatever “editorializing” means, it creates a new litigatable element of the Section 230 defense. If a defendant claims Section 230(c)(1), the plaintiff will respond that the service “editorialized.” This also increases defense costs, even if the defense still wins.

What Does It Mean to “Affirmatively and Substantively Modify” Content? The bill attempts to draw a line between “substantive” modifications of third-party content and modifications that affect “format, layout, or basic appearance.” Services can slice-and-dice content many ways, so these two categories are not the complete Venn diagram. Judges inevitably will make tortured epistemological analogies trying to fit a case’s facts into these incomplete boxes. Again, even if the defense prevails, the additional litigatable element boosts defense costs.

Constitutional Problems? Section 230(c)(2)(A) privileges certain content classes over others. Those classifications have been inconsequential because (1) defendants usually rely on Section 230(c)(1) over Section 230(c)(2), and (2) the “otherwise objectionable” catchall essentially covered any non-enumerated content categories. The bill would change both of these considerations, and as a result, I believe that increases the risk that the bill’s changes are unconstitutional content-based speech restrictions. In particular, the revised Section 230(c)(2)(A) would condition a government-provided privilege on the removal of only certain types of content and not others, and it’s arbitrary which content is privileged. (For more, see this). This raises the possibility of strict scrutiny for the amendments.

A Few Comments About the CASE Act

The Online Content Policy Modernization Act piggybacks on the CASE Act, which the Senate Judiciary Committee approved in September 2019. (It hasn’t proceeded to a Senate floor vote because Sen. Wyden has a hold on it). The CASE Act addresses the concern is that it’s too costly and complicated for independent copyright owners to enforce against small-scale infringers in federal court. These costs are necessary to provide industrial-grade adjudication processes that ensure due process and reach well-reasoned results.

Our federal courts are already clogged with many unmeritorious low-scale copyright lawsuits, many of which fail on a motion to dismiss. These junk lawsuits, and many new ones, would migrate to the Copyright Office kangaroo court, where they will have a greater chance of success. Defendants may not get proper notification of the suit, know how to defend their interests, or be willing to spend money on legal defense; and this makes the kangaroo court an excellent trolling venue for quick settlements. Is this really Congress’ top priority today?

In August, I wrote about the urgent structural problems in our country and why I am baffled that Congress is prioritizing Section 230 reform instead. Hundreds of Americans are dying each day due to COVID 19, yet Sen. Graham is investing his office’s resources to help trolls. WTF?

Sen. Graham’s baffling moves show why Americans HATE Congress–because some members care more about scoring political points than doing the hard work necessary to make America great. We are better than this, Sen. Graham. Do your job, or better yet, find a new one. South Carolina voters, you can help make that choice for him.