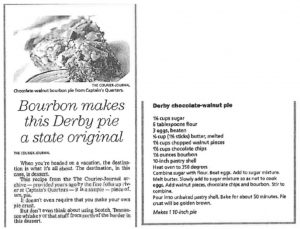 A “derby” is a dictionary noun for a race of three-year-old horses. The most famous derby in the United States is the Kentucky Derby, but the word traces its roots to a 1780 race in England.

In 2017, the (Louisville) Courier Journal published two stories: (1) a recipe headlined “Bourbon makes this Derby pie a state original,” and (2) a review of a bakery with a photo caption: “Derby Pie, Mint Julep and Peach Tea macarons from Derby City Macarons.”

“Derby-Pie” is a federally registered trademark for a “well-known chocolate nut pie” sold nationwide. The trademark owner didn’t appreciate the newspaper’s references to Derby Pie not from it, so it sued for infringement. The newspaper moved to dismiss.

The court acknowledges all of the right considerations, including non-use, nominative and descriptive use, Rogers v. Grimaldi, and the First Amendment, but sidesteps most of this. Instead, the court can’t decide if this is a non-trademark use or not confusing, flipping back and forth between the two concepts. The court says “the Complaint fails to plausibly establish that Defendant used Plaintiff’s Mark in any other way than a non-trademark one.” However, the court also explains why there isn’t a likelihood of confusion “because both Articles explicitly and repeatedly identify the source of the product as being other than DERBY-PIE®.”

However the court got there, the defense win was inevitable. That’s why I’m baffled why the trademark owner brought this lawsuit in the first place (represented by counsel, no less). It appears the trademark owner wants to control all discussions about “Derby Pies,” even though that is an obviously abuse of any rights it has. It’s like someone trying to control all uses of [event name] pie–imagine analogous attempts to control “Championship Pie” or “Tournament Pie.” This isn’t even analogous to the NFL’s overreach with “Super Bowl” because the trademark owner in this case didn’t have any claim to the underlying event name (such as the “Kentucky Derby”). Because this case is so remarkable (in a bad way), this is a good candidate for a Lanham Act fee shift. For more on trademark owner overreach to control ordinary conversations, see my Online Word of Mouth article.

← YouTuber Loses Lawsuit Over Channel Termination–Mishiyev v. Alphabet
My Third Set of Comments to the CA DOJ on the CCPA Regulations →
Subscribe to Blog via Email
Categories