Can a “Fire” Emoji Support a Manslaughter Conviction?–Johnson v. State

Johnson and Roe were drug users. They split a purchase of heroin, which turned out to contain fentanyl. Roe died from ingesting it. Johnson was charged with, among other things, involuntary manslaughter for providing the heroin to Roe.

The court recaps a lengthy text message exchange between Johnson and Roe that included these texts from Johnson:

This is a rare instance where a court opinion displays the actual emoji at issue, so kudos to the judge for doing that. However, the depicted fire symbol almost certainly isn’t what either Johnson or Roe actually saw. And note that Lexis didn’t include the symbol in its electronic republication or signal its absence.

Trooper First Class Michael Buckius testified that “the use of the fire emoji when describing drugs means that the drugs are ‘really good.'” In this situation, Buckius is acting as a domain expert on drug conversations (not for the first time), rather than the court relying on a linguistics or emoji expert to interpret the emoji. This parallels the Jamerson case, where the court accepted the testimony of a law enforcement detective about the special meaning of emojis (like the crown emoji) in the sex trafficking community.

The court overturns the involuntary manslaughter conviction. The fact that Johnson provided the toxic heroin to Roe wasn’t enough to establish the crime’s elements. The fire emoji didn’t change that result. The state argued that the fire emoji “demonstrates Mr. Johnson’s knowledge that the drug sale was so inherently dangerous as to show a wanton disregard for human life.” The appeals court disagreed. Buckius only testified that the fire emoji meant the drugs were “really good,” which could mean that they were superior in quality or pleasurability, not necessarily that they were really strong. 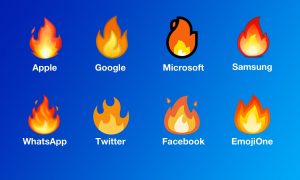 According to Dictionary.com (not cited by the court), the fire emoji “is used to signify that something is cool, awesome, exciting, or more colloquially, ‘on fire.’ It can also convey that someone is sexy, (i.e., hot), or refer to other various metaphorical fires.” Emojipedia (also not cited) explains that the fire emoji “is used to convey, beyond literal fires, a range of figurative expressions connected to fire. This includes senses of ‘excellent’ (lit), ‘attractive’ (hot), ‘scathing or searing’ (sick burn), or ‘performing exceptionally well’ (on fire), among other senses.” All of these meanings are consistent with Trooper Buckius’ testimony and not consistent with a voluntary manslaughter conviction. This looks like a situation where the prosecutors overclaimed the meaning of the fire emoji and the appeals court properly pushed back.