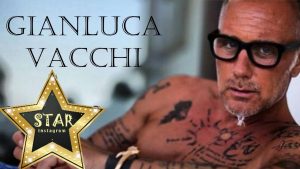 Gianluca Vacchi is an Italian entrepreneur. He has a large social media presence, including nearly 12M Instagram followers and 1.8M Facebook followers. He claims his social media presence depicts a fictional alter ego who is “an extravagant millionaire dancing with beautiful ladies in exotic locations.” Vacchi has registered the copyright in five videos depicting this character, with the following distinctive physical characteristics:

an older gentleman with short white/gray hair and squareshaped glasses. He has a neatly trimmed, salt-and-pepper beard, which, in four of the five videos, is tied into a knot beneath his chin. In each of the Registered Videos, he is topless, at least for a portion of the video. He is in prime physical shape, and his body is covered in tattoos. The tattoos on his torso appear to be script writing. In four of the five videos, he wears shorts or swimming trunks, with the left leg of the garment rolled up. Also in four videos, he wears a cuff around his left ankle, and metal cuffs around both of his wrists.

In the Registered Videos, Vacchi’s character DJ’s or dances to music with younger, bikini clad-women on a boat or, in one case, by a pool. The videos last from thirty-five seconds to one minute, and they have neither text nor dialogue. In three of the videos, Vacchi’s character performs a choreographed dance with a younger woman. At times, they face each other and dance in sync.

You can find some of Vacchi’s videos here. I could only watch about 10 seconds of the first video before wanting to swear off YouTube permanently. If you don’t want to wade through the videos and possibly lose any remaining faith in humanity, I’ve included a small image to the right demonstrating some of Vacchi’s signature features.

an older gentleman appears on a boat. The man has a neatly trimmed, salt-and-pepper beard and square-shaped glasses. His tattooed torso is exposed beneath suspenders, although he lacks the muscle definition of Vacchi’s character. He is wearing long striped pants. The first two seconds of Hard Work show the man dancing to music. For two more seconds, the shot is of a younger, taller woman in a one-piece bathing suit, also dancing to music. For another two seconds, the man and woman dance together, face-to-face. For the last nine seconds of the commercial, the screen goes white, and black text appears with the words, “The harder you work the nicer the vacation … your boss goes on,” followed by the slogan, “Don’t get mad … get E*TRADE.”

In case you didn’t do the math, the old dude appears on the screen for no more than 5 seconds of the 15 second commercial.

the man from Hard Work makes a brief appearance. The commercial opens with a shot of two paddleboarders that are passed by a yacht. The frame quickly shifts to the yacht, where a young man is dancing. The camera follows the young man throughout the boat, until he arrives at a dance party on the bow. Among young men and young women who are dancing in the background, is the older man from Hard Work. He is on screen for no longer than four seconds. White text appears that says “The dumbest guy in high school just got a boat.” The video resumes with the young man jumping off the boat, and the appearance of text that says “Don’t get mad … get E*TRADE.”

Like seriously, don’t blink or else you’d miss the old dude in the dancing crowd.

Nevertheless, the court grants ETrade’s motion to dismiss for lack of substantial similarity.

The Videos. Yacht Life wasn’t substantially similar to any of Vacchi’s videos because it focused on a dumb young guy buying a yacht, not the suave old dude. The similarities between Hard Work and the Vacchi videos qualify as scenes-a-faire. For example, two of Vacchi’s videos depict “an older man dancing with a younger woman on a boat, as music plays in the background,” which is a venerable if exceptionally tired cliche/trope. Furthermore, “the music, the boats, the dancing, and the cinematography differ substantially from those in the Registered Videos.”

The Character. The characters have some commonalities, but only at a general level. There are significant differences:

Basically, Vacchi’s character is a “stock character of the older man as playboy.” The fact that ETrade’s character might resemble Vacchi isn’t copyright infringement.

Given its moldy-oldy status and the easy motion to dismiss, this would be a good case for a Section 505 fee shift.

Note: ETrade isn’t a stranger to IP lawsuits over its commercials. In my Advertising Law course, I still use Lindsay Lohan’s lawsuit against E*Trade over this 2010 Super Bowl commercial.