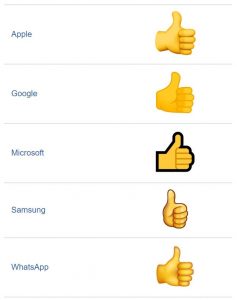 This is a lawsuit over where a child should live. The mom moved from Honduras to the United States with her minor child. The dad remained in Honduras and initiated legal proceedings to bring the child back to Honduras. These kinds of cases are heartbreaking to read, especially when the case involves San Pedro Sula, a city that has been a “murder capital of the world.” The court requires the mom to bring the child back to Honduras.

As part of the analysis, the court considered whether the dad acquiesced to the child’s move to the U.S. The mom cited that the dad had replied with a “thumbs-up” emoji to the mom’s text message that she had arrived in the US. The mom claimed that the thumbs-up had ratified the child’s relocation to the US. The court disagreed because:

emojis…are widely perceived to be, and in fact are, generally very casual communications, strikingly devoid of formality

For this court, the emoji was not enough to override the dad’s obvious desire to have his child returned to Honduras. Plus, courts will apply high “formality” standards when it affects the disposition of a child.

Like most judicial reviews of emojis, the court doesn’t carefully review the emojis’ role in the conversation. The emoji could be acting as a word substitute–the equivalent of “yes”– though the preceding text messages did not appear to pose a question to the dad. More likely, the emoji performed discourse management, i.e., a way to communicate positive sentiment and keep the conversation going without signaling any commitment, like an “un uh” or a nodding head designed to signal interest. Some folks also use the thumbs up emoji to signal an unenthusiastic or even disingenuous assent, like “OK” said in a weary voice. Whatever the explanation, in the context of this text message exchange, the court was right to downplay the semantic meaning of the thumbs up.

In my Reddit AMA (see below), I got asked a couple of times whether a thumbs up emoji could constitute legal commitment, like binding the sender to a contract. Absolutely it could, just like a real-life thumbs up or head nod also could constitute legal assent. Cf. the CX Digital case, where a text message of “awesome” was enough to form a $1M+ contract. That commitment could extend to child custody issues. Consider this alternative hypothetical:

Text message from mom: I plan to relocate permanently to the US with our child. Do you consent to the child’s permanent relocation to the US?

We would want to review the entire conversation to understand the context for this exchange. However, without more, this looks like it could be a binding consent to the relocation. So the “problem” with the emoji wasn’t its lack of “formality,” it was the surrounding context wasn’t strong enough to infer the meaning that the mom argued.

BONUS: Last week, I did a Reddit AMA on emoji law. See the IAMA and AMA. Why two threads? We started out in the wrong part of Reddit (the AMA), when we meant to be in the IAMA, but it was too late to kibosh the first one because it had already attracted several Qs. So we kept doing both. As you’d expect, there are some good Qs and some less-good Qs, but I did try to answer them all. Hope you enjoy.