Memes implicate many legal issues, one of the major ones being copyright infringement and fair use.

The copyright dispute here revolves around a photograph of Willie Nelson taken by the plaintiff, Philpot, and posted to Wikimedia pursuant to a Creative Commons Attribution 2.0 Generic license. This license permits sharing and adaptation of the work, as long as proper attribution is provided.

The defendant, Alternet, took the photo and superimposed a quote over it: “Rednecks, hippies, misfits – we’re all the same. Gay or straight? So what? It doesn’t matter to me. We have to be concerned about other people, regardless. I don’t like seeing anybody treated unfairly. It sticks in my craw. I hold on to the values from my childhood.” The quote seems to come from a 2010 Parade interview with Nelson. After superimposing the quote, Alternet posted the photograph on Facebook with the caption, “We need more values like this.” Alternet did not credit Philpot for the photo, which was shared 33,000 times from Alternet’s Facebook page. 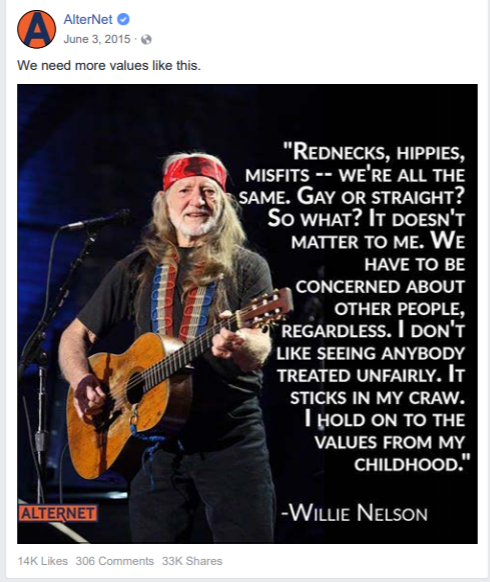 Philpot sued for copyright infringement and DMCA violations, and Alternet moved to dismiss. Its copyright infringement defense basically boiled down to meme = fair use. The court’s analysis, however, focuses on the number of factual questions needed to be resolved before a fair use decision could be rendered.

It’s hard to win a fair use defense when a court decides that it needs more facts to rule on transformativeness, and the rest of the analysis predictably can’t save Alternet’s motion. The court finds that the rest of the factors similarly require factual analyses inappropriate for the motion to dismiss stage. Alternet’s fourth factor effect-on-the-market argument, in particular, focused on outside evidence, such as Philpot’s testimony in previous copyright infringement cases, which the court finds it inappropriate to consider at this stage.

Alternet fares better with dismissal of Philpot’s DMCA claim. Philpot’s complaint alleged that Alternet should have known its removal of the metadata attached to the photograph would enable infringement of Philpot’s copyright, but the court finds this a conclusory allegation with no facts pled as to Alternet’s mental state. Because the relevant portion of the DMCA requires an “affirmative showing . . . that the defendant was aware or had reasonable grounds to be aware” of the consequences of its action, the court dismisses the DMCA claim with leave to amend.

In my previous work on memes, I concluded that the word “meme” is used to describe so many disparate things that a one-size-fits-all fair use analysis seems untenable. Some memes are incredibly transformative of the source material, while other things that people call memes seem much less transformative to me. The version of a meme at issue in this case – a photograph with text superimposed over it – seems to me to be one of the middle cases. I could see different instances of this going either way on a transformative analysis, depending on what exactly the superimposed text is in relation to the underlying photograph.

What really strikes me about this case is that it’s actually all about attribution, a right that is enormously popular with creators but that’s not actually part of the exclusive statutory rights of U.S. copyright. I’ve been observing for a while this phenomenon when it comes to credit: It’s often immensely important to online creators, but it’s not really part of U.S. copyright law. Philpot’s license allowed Alternet to do virtually anything with the photo as long as it provided the proper credit. This entire lawsuit could have been averted so easily.