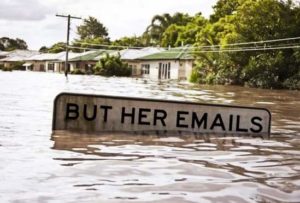 This is a First Amendment retaliation case. Plaintiff alleges that local officials retaliated against her for exercising her First Amendment rights. One of the defendants is mayor of the small village where plaintiff resided (Timberlake, “a small village of six- to seven-hundred residents”). Plaintiff believed that Timberlake was engaging in an “aggressive traffic ticketing campaign” and started digging into how the village was using traffic-ticket revenue.

In the course of her investigation, she engaged in surveillance of the village’s service garage to monitor the police chief’s activity. The two had an encounter that ended in plaintiff allegedly laughing, and yelling . . . and calling the police chief an idiot. She was charged with disorderly conduct, but acquitted by the magistrate who found that “calling an officer an asshole is protected speech”.

Effectively immediately, [he would] no longer be viewing or responding to any mail sent to [his personal acount].

He also instructed plaintiff to direct all communications to his official account.

Plaintiff did not comply and sent the mayor numerous emails to the mayor’s personal account. The bulk of these related to official business (public records requests, her thoughts on the police department). Two of the emails contained, as the court characterizes them, “personal attacks on [the mayor] and his family.” The mayor filed a complaint, saying he felt personally harassed. The police found probable cause for “telecommunications harassment”. The charge for telephone harassment was dismissed (it’s unclear why). After additional emails were sent, the mayor reported these, resulting in an additional charge. Between May and July of 2015, Plaintiff sent numerous additional emails to the mayor on his personal account. The emails sent by plaintiff ranged from public records requests or emails relating to them, to a request to connect on LinkedIn, to emails purporting to compliment the mayor for his conduct as mayor.

Plaintiff went to trial on charges of telecommunications harassment and was acquitted. She then filed a 1983 lawsuit against the mayor and police chief among others. The district court granted summary judgment, finding the charges were supported by probable cause and there was no retaliatory motive.

On appeal, the Sixth Circuit says it’s undisputed plaintiff sent the mayor emails to his personal email address after finding out the mayor objected. The key question is whether plaintiff could be prosecuted under the statute. The court says yes.

The statute is not content-based and had been found by Ohio courts to not be overly broad. The Sixth Circuit agrees with defendants, rejecting plaintiff’s position that “the First Amendment allows her an uninhibited right to communicate with [the mayor] through channels he does not use in his official capacity . . . simply because he is a public official.” The court cites to Rowan, a case that allowed residents to opt out of mailings based on the privacy interest residents have in their mailboxes, and finds it analogous:

A personal email account is the functional equivalent of a home mailbox. The state’s interest in protecting an individual’s privacy carries equal weight in both situations. For us to hold otherwise—and thus to endorse [plaintiff’s] conduct—“would tend to license a form of trespass.” . . . In the same way that [the mayor] could stop [plaintiff] from entering onto his property to share her views about his performance, he should also be able to keep her from sending unwanted messages to a personal email address.

The court also notes plaintiff had available other channels to express her criticism of the mayor and thus she’s not being silenced. The court continues:

the implications of holding that [plaintiff] would not be prosecuted for telecommunications harassment are troubling. There would be no recourse for public officials harassed at home, on a personal phone line, or at a personal email account.

The court concludes that the statute effectively balances important speech and privacy interests.

We’ve seen a few unsolicited email advocacy cases. Pulte Homes, Inc. v. LiUNA and FTC v. Trudeau are two, and of course, there’s Intel v. Hamidi. This case is interesting because it involves a politician who happened to use his personal email address prior to the unwanted emails.

The court’s mailbox analogy is rough at best, and does not take into account whose server the mail even resides on, or the fact that the mayor likely had an easy technical fix: blocking the particular sender. The analogy of a server to property—even if it were the mayor’s rather than a service provider’s—is imperfect. The analogy also fails to account for the fact that people often route their communications to multiple in-boxes or services. The communication may be more or less intrusive depending on where it is received, and this is something that often the recipient (not the sender) has ultimate control over.

The fact that a person running for public office is also complaining about repeated mostly work-related communications strikes me as bogus. It brings to mind US v. Cassidy, where the court said the repeated communications (albeit via Twitter) and criticism of a public figure could not be prosecuted.

Finally, the extent politicians can keep us out of their personal in-boxes, I propose a reciprocal rule. No more political robocalls, emails, or texts!