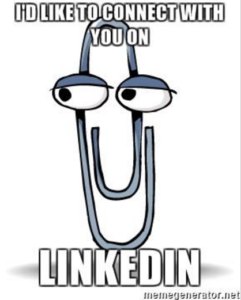 This is another case considering when LinkedIn activity violates a non-solicitation clause. Bankers Life, a company that sells insurance and financial products, sued one of its ex-employees (and his new employer, ASB) alleging among other things that the ex-employee violated his non-solicitation covenant through his communications on social media. Here’s the clause defendant Gelineau agreed to:

During the term of this Contract and for 24 months thereafter, within the territory regularly serviced by the Manager’s branch sales office, the Manager shall not, personally or through the efforts of others, induce or attempt to induce:

(a) any agent, branch sales manager, field vice president, employee, consultant, or other similar representative of the Company to curtail, resign, or sever a relationship with the company;

(b) any agent, branch sales manager, field vice president or employee of the Company to contract with or sell insurance business with any company not affiliated with the company, or

(c) any policyholder of the company to relinquish, surrender, replace, or lapse any policy issued by the company.

In response to the argument that the LinkedIn requests sent by Gelineau violated his non-solicitation clause, Gelineau says that he never sent any direct messages to any of the Bankers Life employees:

Instead, Gelineau stated that all of the individuals on his e-mail contact list were sent LinkedIn generic e-mails asking them to form a professional connection on social media.

The trial court granted summary judgment to Gelineau on this point, and the appeals court affirms. The court looks to other cases dealing with social media communications that allegedly violate non-solicitation clauses and finds that the content and substance of the communications control. A general posting to connect or an announcement about a job change when announced to a network will not suffice to violate the typical non-solicitation clause. The court says in this case the emails were “generic” and contained no discussion of Bankers Life or of ASB or an exhortation to view the job announcement in question. “Instead, the e-mails contained the request to form a professional networking connection.” In addition, they were not direct messages and were merely communications that were sent to all individuals on Gelineau’s contact list.

This case is a nice complement to the Mobile Mini case I blogged about last month. There, the posts in question were essentially sales pitches, and the court says they likely violate the non-solicitation clause, whether sent as direct messages or not. Here, the LinkedIn messages had no call to action other than to connect. So it’s not unexpected that the court finds there is no violation.

It’s surprising to see an employer think that a generic “let’s connect!” email campaign could violate a non-solicitation clause. But Bankers Life did, and the court rightly shut it down.