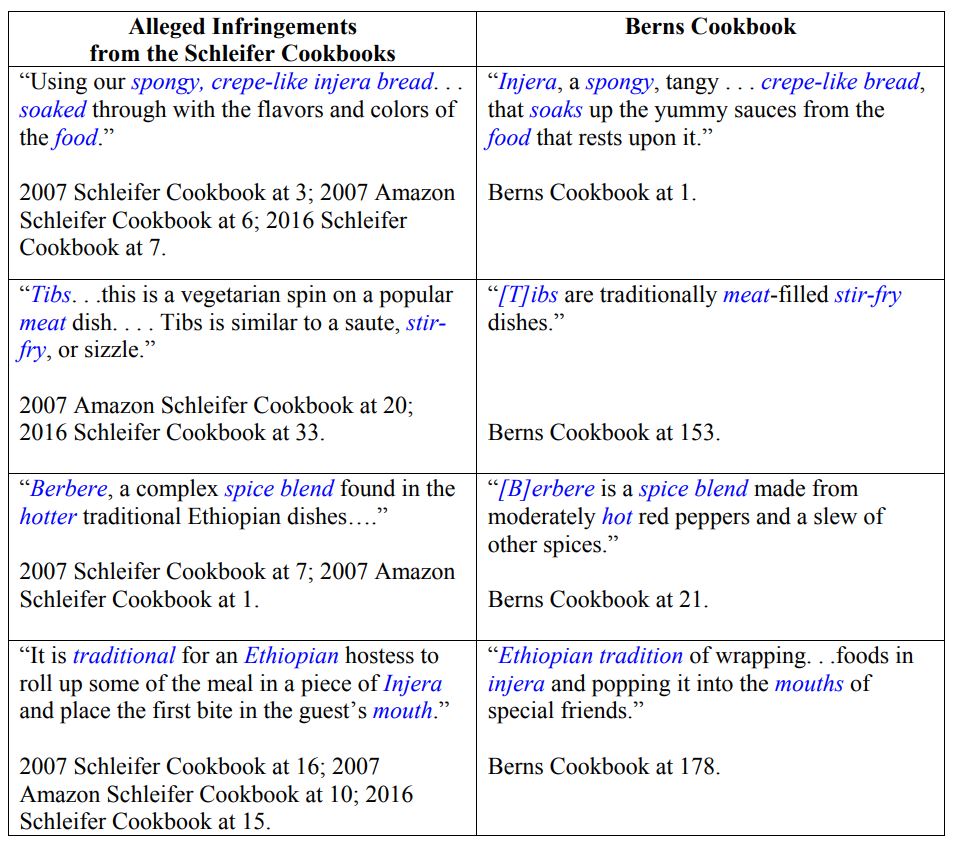 Ugh. Not surprisingly, the judge is not impressed:

These few common words provide no basis for a copyright infringement claim. First, the factual content describing particular Ethiopian foods, ingredients, or culinary traditions is not protectable as a matter of law….To the extent the two works have general similarities – including the fact that both are about vegetarian or vegan Ethiopian cuisine, the inclusion of illustrations of prepared dishes, and descriptions of foods as spicy, spongy, or the like – these elements simply do not amount to a claim for copyright violation. Instead, they are “scènes à faire”… even the most belabored analysis of plaintiff’s allegations shows that his complaint rests on scattered words and short phrases, neither of which are protectable….I thus reject plaintiff’s argument that his content is “original expression to engage the mind as to the flavors, textures, methods, and practice of the art of Ethiopian cuisine.” His cookbook is no such thing.

Having granted the motion to dismiss, the judge then turns to the question of attorney fees and sanctions. The judge does not mask his irritation with the four (!) plaintiff attorneys from this firm who made an appearance in the case (emphasis added):

an award of costs and fees under the Copyright Act is warranted because the factual and legal contentions plaintiff argued were either frivolous or objectively unreasonable, and there is a need in this case for both compensation and deterrence. First, the unreasonable nature of plaintiff’s claims in this case is manifest. It was objectively unreasonable for plaintiff to have believed that a colorable copyright action exists based on four examples of similar language in what amounts to non-protectable factual descriptions of Ethiopian cuisine and culinary traditions. The unreasonableness of plaintiff’s position is supported by the fact that plaintiff’s opposition to the motion to dismiss contains a mere three-and-one-half pages arguing that his copyright claim was actionable. The vast majority of those pages is the plain recitation of the legal standards, which is to say that plaintiff could not point to any cases that would support his action because there are none. Put differently, plaintiff’s position was so far afield that his attorneys could not even defend against the motion to dismiss.

No reasonable copyright attorney, or even an attorney who had devoted 20 minutes to legal research, would have filed this complaint. If plaintiff’s attorneys did not do the requisite research when filing the complaint, surely they should have recognized the absence of merit when preparing the opposition to the motion to dismiss….

an award of costs and fees is crucial here, so as to deter this plaintiff, and other similarly situated plaintiffs, from bringing frivolous and objectively unreasonable claims. There is also a need to deter attorneys who fail to comply with their obligations to the Court to research and put forth good-faith claims and defenses….

The same reasons animate the Court’s assessment of sanctions on plaintiff’s attorneys. Their conduct in this case can only be described as bad faith. Plaintiff’s attorneys failed to perform a pre-litigation investigation and then failed to withdraw the claims when, on drafting the opposition to the motion to dismiss, they found no cases supporting their positions. Not only could they not affirmatively support their case, but they could not even address the majority of defendant’s substantive arguments. Plaintiff’s attorneys seemed to have taken the position that they were going to roll the dice even though nothing in law or fact supported their filing or prosecuting this suit.

Given the foregoing, it is appropriate that both plaintiff and his attorneys be jointly and severally liable for the costs and fees, which the Court will assess after submission of billing records by defendant.

I’d be surprised if the plaintiff or his attorneys don’t appeal this ruling, at least to try to get out of the fee shift/sanctions. I approached both sets of attorneys for comment. Defense counsel declined comment. Plaintiff’s counsel did not provide an on-record comment before deadline.

Kudos to this judge for ending this case early and compensating the defendant for the costs of defense. To me, this is exactly what Congress told the courts to do with low-merit copyright cases, but sometimes judges give plaintiffs too much benefit of the doubt. This ruling provides some evidence that the (cited) Supreme Court’s Kirtsaeng ruling on copyright fee shifts may be incrementally helping more defendants get fee shifts.

Personal note #1: It breaks my heart to see members of the vegetarian community square off in court. Can’t we all get along? We should be fighting the meat-eaters, not each other!