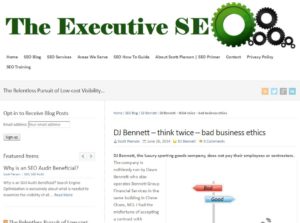 Dawn J. Bennett was a financial advisor in major trouble with the SEC. She also has a sporting apparel company. She hired an SEO, Pierson, to improve the search engine indexing of her website. After a payment dispute, Pierson posted a blog post that starts out “DJ Bennett, the luxury sporting goods company, does not pay their employees or contractors.” Bennett demanded Google de-index the blog post, and then sued Google for defamation and more when it didn’t.

* “Google qualifies as an interactive computer service”
* “Scott Pierson, a third party, wrote the blog about Plaintiffs,” and
* “Plaintiffs aim to hold Google liable as the publisher of the content”

To salvage their claim, Plaintiffs attempt to argue that a novel issue is presented in this case which requires the court to deny the Defendant’s Motion to Dismiss. Plaintiffs state “[b]ut what courts have not fully addressed is where a service provider, such as Google, adopts definitive prohibitions regarding the content of third party user material, and does not enforce them … [what is] the impact of such failure on Section 203(e) immunity.” Simply, “… does it create such an obligation for itself if it adopts guidelines of what it deems objectionable content and fails to follow through by enforcing such standards?” The answer is “no,” and thus Defendant’s Motion to Dismiss must still be granted. See Klayman, 753 F.3d at 1359–60 (discussing that the CDA bars claims arguing that service providers must be held to a heightened duty of care based on adoption of any statements allocating rights and responsibilities between interactive computer services and their users). “It would be impossible for service providers to screen each of their millions of postings for possible problems.” Zeran v. America Online, Inc., 129 F.3d 327, 331 (4th Cir. 1997). Furthermore, holding Google liable for establishing standards and guidelines would ultimately create a powerful disincentive for service providers to establish any standards or ever decide to remove objectionable content, which the CDA was enacted to prevent.

As the court indicates, this argument is not the least bit novel. Dozens of times, plaintiffs have pointed to defendants’ editorial standards as creating some enforcement duty. In my Internet Law course, I teach this issue using the Noah v. AOL case from 2003. Thus, the court rightly shut it down quickly.