Frequency of Courts’ References to Emojis and Emoticons Over Time

[This is another excerpt from my Emojis and the Law paper.]

In preparing the article, I gathered a dataset of all cases I could find in Westlaw and Lexis containing the word “emoticon” or “emoji.” This dataset is subject to the many known limitations of researching cases in Westlaw and Lexis, such as the limited percentage of opinions that make it into the electronic databases. In total, I found 80 opinions dated December 31, 2016 or earlier containing the term “emoticon” or “emoji.” I have posted my dataset.

This count of 80 opinions likely understates the actual number by a lot.

First, I did not search for any synonyms of “emoticon” and “emoji.” For example, emoticons are sometimes called “smileys,” and surely that search term would have yielded additional relevant results. However, “smiley” has other meanings and is sometimes used as a personal name, so a Westlaw or Lexis search for “smiley” yields over 10,000 results.

Second, I could not search Westlaw and Lexis using emoticon characters, such as a query “:-)” for the smiley because those include boolean signals. Furthermore, while doing other research, I stumbled across Fry v. Robinson, 2017 WL 416974 (6th Cir. Jan. 31, 2017). That opinion displays smiley emojis three times and a winky emoji once (I’m having trouble with getting the right emoji to display in WordPress, so I’ll present this as screen grabs):

Because the opinion does not use the phrase “emoticon” or “emoji,” it did not show up in my database queries. Even though Westlaw’s opinion showed the smiley and winky outlines, when I tried searching for the character outlines in Westlaw, Westlaw simply didn’t recognize it. It’s likely there are other cases like this one.

Third, the electronic databases do not allow search queries using images, so it’s impossible to search for emojis in their graphical format. However, it probably would not have made much of a difference to my searches because court opinions rarely display the actual emoji at issue (the paper explains this more).

Despite the dataset’s limitation, it still may provide some helpful insights into emojis in court. At minimum, it’s clear that the court system soon will be encountering more cases involving emojis. This graph showing the number of court opinions each year containing the word “emoticon” or “emoji”: 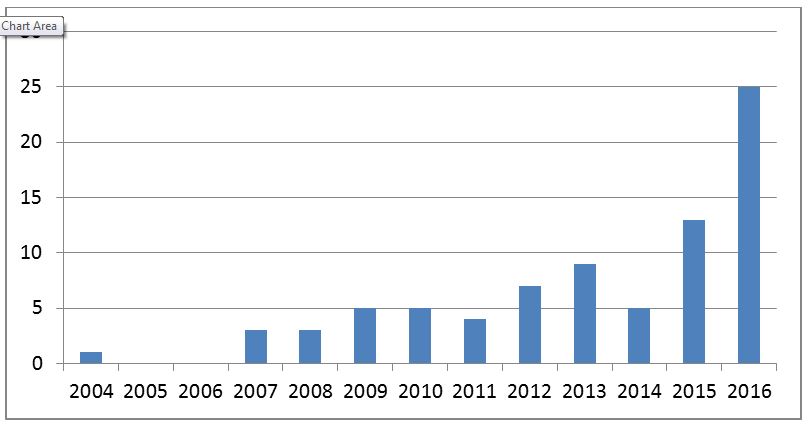 UPDATE on the article excerpt: it’s too early to definitively crunch 2017’s stats, but I’m amazed at how quickly the word “emoji” has overtaken “emoticon.” The first reference to emoji was 2014, and about 70 of the 80 case references I counted were to “emoticon.” By 2017, out of 14 cases through 6/21/17, emoji appears in 11 cases and emoticons only in 3. In other words, there have been more emoji references in the first half of 2017 than in all of the prior caselaw history. Of course, some courts may be using the term emoji to describe what are actually emoticon; I’ve found several cases of the reverse (emoticon used to describe emoji). Still, in just a couple of years, emojis have probably permanently eclipsed emoticons in caselaw references.