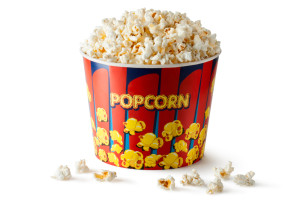 I chose the popcorn, but maybe I should do both. Photo credit: “Big Bucket of Popcorn” // ShutterStock

This case is filled with sketchiness. First, the litigants compete in the “native advertising industry,” which doesn’t have a great reputation (and this lawsuit isn’t likely to improve it). Second, the ads in question promote wrinkle creams, diet pills and muscle builders–the kinds of products that advertising law professors assume will be regularly overpromised and underdelivered. Third, the plaintiff believes the defendant is poaching advertisers through overclaims and other manipulative tricks–legitimate concerns, but perhaps tinged with irony in this industry context? Maybe the plaintiff views itself as the white knight that will save the industry from a race to the bottom. Fourth, the plaintiff itself recently lost a defamation case brought by a different competitor, and the FTC is regularly sniffing around native advertising and discretionary health products like the ones at issue here. With all of this litigiousness in the air, it makes me wonder if the niche will erupt in a fireball of litigation. Finally, I can’t help noting the litigants’ names are generic dot com cliches: the plaintiff is “Congoo,” a/k/a “AdBlade,” which is owned by “Adiant”; and the defendant is “RevContent.” In light of all the sketchiness, while reading the opinion I couldn’t decide whether to grab a bucket of popcorn or a bloodsplatter-proof poncho. (Or maybe it’s just my diet pills are giving me anxiety).

After reading the court’s short opinion, I remained unclear about exactly what RevContent allegedly did wrong, so I pulled the complaint seeking further clarity. Unfortunately, this didn’t really help. The complaint extensively details alleged problems with the implementation of three native advertising campaigns associated with RevContent (for the aforesaid wrinkle creams, diet pills and muscle builders), and AdBlade believes it’s losing customers to RevContent due to price competition that may be assisted by false advertising. Yet, after reading the complaint, I’m still not sure who wrote the allegedly problematic native advertising content or who controls the various product decisions that contribute to the alleged falsity. Attributing these actions to the defendant (rather than its advertisers or other third parties) ordinarily seems like an essential part of the plaintiff’s prima facie case.

Indeed, the plaintiff practically writes the defendant’s Section 230 arguments when the complaint says: “Plaintiff, and other native advertising companies, operate as an “intermediary” between (a) the actual advertisers, i.e., those businesses offering products and/or services for sale (hereinafter “Advertisers”), and (b) the news, information and content websites that publish the native advertisements.” Yet, the defendants’ Section 230 motion to dismiss fails. Why?

The court cites the following allegations from the complaint:

• Defendants have published or caused to be published many impressions of native advertising unit ads (“Defendants Ads”) with various Published Websites, including Publisher Websites that were previous clients of Plaintiff.
• Many, if not most of Defendants’ Ads and the Advertisement Websites to which the Ads redirect unsuspecting consumers, employ false and misleading advertising intended to deceive innocent consumers out of the significant monies by charging their debit cards or credit cards.
• Defendants have employed the above stated false and misleading representative in advertising to generate greater income from their Ads and those of Defendants’ Advertisers [the court added the emphasis to the complaint]

Notice the tricky drafting. The defined term “Defendants Ads” lumps together items that could come from a variety of sources. The court takes the bait:

The plaintiff alleged that the defendant wooed advertisers to switch allegiances based on false promises about its advertising services. Those first party representations should be outside the scope of Section 230, a point the court acknowledges more expressly in its 43(a) Lanham Act false advertising discussion. However, typically third party ads, and third party websites promoted in those ads, should be clearly covered by Section 230. Unfortunately, the court bypassed all of that nuance in its pithy Section 230 discussion. What the court should have done instead was expressly identify the parts of the plaintiff’s complaint that were preempted by Section 230; which would have honed the dispute for the next round(s). We saw the more nuanced handling of a similar situation in the Tanisha v. Chandra ruling. Perhaps the court will become more exacting about the facts at the summary judgment stage.

Note: I approached both sides’ lawyers for a comment about the ruling. The defendants declined. The plaintiffs did not respond by posting time.