Let me see if I can sum up all of my knowledge about Internet jurisdiction in a few pithy bullet points:

Given that last fact, which is absolutely incontrovertible, why am I blogging an Internet jurisdiction case today? I think this week’s ruling in Burdick v. Superior Court could be a pretty big deal. First, the ruling governs the growing number of cases where social media users get ranty. Second, the case holding is exceptionally clear; and it does a good job summarizing and distilling a fairly large body of murky precedent. Third, California appellate panels rarely publish their rulings, so a published opinion like this one will get many future citations. With all of these plus factors, I’m taking one for the team and blogging an Internet jurisdiction case anyway. 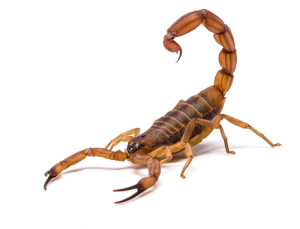 I’d rather be stung by a dozen scorpions than read another Internet jurisdiction case. Photo credit: Brown scorpion // ShutterStock

The dispute involved a skin care product called NeriumAD. Some folks bashed NeriumAD online, so Nerium folks bashed the bashers. A person associated with Nerium, Burdick, made the following Facebook post about the initial bashers:

That posting did not mention Sanderson or Taylor by name, but referred to a “Blogging scorpion, liar, terrorist, pretencer, amateur, wanna-be, con artist.” The posting then stated: “BOY DOES THIS ‘BLOGGING SCORPION’ HAVE A LOT TO HIDE! More to come shortly about the Truth and Facts about this ‘Blogging Scorpion[ ]’, things like: [¶] [ (1) ] Why he lost his medical license (yes we have the documents directly from the Medical Board of California) [¶] [ (2) ] Why he personally uses multiple social security numbers [¶] [ (3) ] How many times has he been charged with domestic violence [¶] [ (4) ] Why he makes medical claims about his product that is not FDA approved (yes we have the video of him making these medical claims publically) [¶] [ (5) ] And much much more! [¶] Stay tuned as we reveal the ‘REAL’ truth behind this ‘Blogging Scorpion’.”

Burdick is in Illinois. The plaintiffs sued him in California. Burdick had no meaningful California contacts:

It is undisputed Burdick has no direct contacts with California. He is an Illinois resident, has never resided or worked in California, has never owned or leased property in the state, and, by all accounts, has been in the state only twice….The only conduct which might connect Burdick in a meaningful way with California was the allegedly defamatory posting on his Facebook page. As the trial court found, all of Plaintiffs’ claims arise out of that posting.

Applying the Supreme Court’s recent Walden ruling, the court says California doesn’t have jurisdiction over Burdick even under the Calder “Effects Test”:

merely posting on the Internet negative comments about the plaintiff and knowing the plaintiff is in the forum state are insufficient to create minimum contacts….Plaintiffs did not produce evidence to show Burdick’s personal Facebook page or the allegedly defamatory posting was expressly aimed or intentionally targeted at California, that either the Facebook page or the posting had a California audience, that any significant number of Facebook “friends,” who might see the posting, lived in California, or that the Facebook page had advertisements targeting Californians. Sanderson declared that Burdick’s Facebook page was “publicy-available,” but that fact would mean it would have been less likely Burdick had intentionally targeted California as opposed to any other jurisdiction.

I hadn’t paid much attention to the Walden case when it came out, but it’s clearly casting a long shadow over this dispute and other cases analyzing the Calder case. As distilled by this court, the Calder Effects Test has some important limitations:

Neither Burdick’s Facebook page nor the allegedly defamatory posting had a California focus like the defamatory article in Calder. The posting was about NeriumAD—a product sold throughout the country—and its critics. No evidence was presented that Burdick’s Facebook page had its widest circulation, i.e., the greatest number of Facebook friends, in California, that Burdick expressly aimed his intentional conduct at California, or that Burdick knew the posting would cause harm connecting his conduct to California and not only to Plaintiffs.

The court summarizes its holding:

We hold that posting defamatory statements about a person on a Facebook page, while knowing that person resides in the forum state, is insufficient in itself to create the minimum contacts necessary to support specific personal jurisdiction in a lawsuit arising out of that posting. Instead, it is necessary that the nonresident defendant not only intentionally post the statements on the Facebook page, but that the defendant expressly aim or specifically direct his or her intentional conduct at the forum, rather than at a plaintiff who lives there. We emphasize the exercise of personal jurisdiction must be based upon forum-related acts that were personally committed by the nonresident defendant, not upon the plaintiff’s contacts with the forum or acts committed by codefendants or third parties.

What’s ambiguous about this holding? Online defamation plaintiffs don’t automatically get the right to sue in their home court. They have to show that the defendant intentionally tried to reach people in the state (beyond just posting content to the Internet), and the plaintiff doesn’t get to count the activity of anyone else in the analysis. It seems so easy when the court lays it out so clearly.

It’s hard to get too fired up about any Internet jurisdiction case, but I think this case demonstrates how the tide has turned in Internet jurisdiction cases away from stupid Internet freakout cases like Zippo. As this ruling illustrates, griping defendants routinely ought to have a solid jurisdictional defense to being sued in the plaintiff’s home court, and plaintiffs can’t simply bootstrap their personal harm in their home state to bypass the rule.