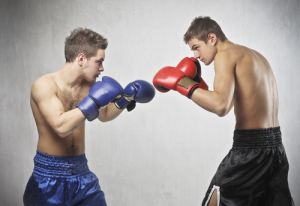 Unlike boxing matches, I prefer my 512(c) cases to be first-round knockouts (for the defense). Photo credit: Two young boxers facing each other in a match // ShutterStock

This case involves the March 21, 2009 boxing match between Roy Jones Jr. and Omar Sheika, broadcast as a pay-per-view. (Spoiler alert: Jones won a TKO in the 5th round). Anticipating users would live-stream the fight, promoter Square Ring contacted UStream several times beforehand threatening/cajoling/begging them to prevent live-streaming. Getting no love from UStream, Square Ring’s agent then sent three DMCA-complaint takedown notices (with specific URLs) between 6:30 and 9:30 pm March 21. UStream replied that it had removed those videos at 8 pm March 23, i.e., about 2 days later. Square Ring sued UStream and others for copyright and trademark infringement based on the user live-streams. UStream moved for summary judgment on the copyright claims citing 17 USC 512(c).

The court first rejects Square Ring’s ridiculous argument that live-streaming isn’t covered by 512(c)’s safe harbor because Congress didn’t contemplate live-streaming when it passed the law in 1998. In a nice evidentiary move, UStream marshaled evidence that live-streaming was taking place back then (if I remember correctly, live cams of public spaces and cute zoo critters were popular at the time), and that was good enough for the court.

Turning to the safe harbor merits, as we’d expect, UStream gets favorable rulings on most of the 512(c) elements. However, the court chokes on the “expeditious takedown” requirement. The court says:

The court is persuaded…by the complete lack of legal precedent for this factual situation. The court is not prepared to make a factual determination as to whether UStream acted expeditiously as required by the safe harbor provision. A number of questions of fact exist as to what precisely was done during the time period in which UStream received the March 17, 2009 notices and the ultimate takedown on March 23, 2009, a full forty-eight hours after the DMCA-compliant notices were received.

Thus, the court denies UStream’s summary judgment motion and sends this case to a trial, where the fact-finder will decide if UStream’s 48 hour turnaround is quick enough.

I can’t recall too many prior rulings on whether the service provider’s turnaround was expeditious enough. The only one I could easily find in my blog archives was Perfect 10 v. Google, where an alleged turnaround time of 7 months was too long. I know I’m forgetting a case or two–readers, can you help?

While UStream’s 48 hour turnaround seems entirely reasonable to me, my impression is that today most service providers aim for faster processing. The opinion doesn’t give any detail explaining why it took 48 hours for UStream to process these requests.

I assume Square Ring opted for a jury trial, and a jury would be a dangerous place for UStream. Outsiders can easily imagine that Internet companies can make copyright infringing activity magically disappear at no cost with zero turnaround time (see, e.g., every Congressional hearing on online copyright issues). I think the risks are even higher for a pay-per-view plaintiff, where the video goes from hot news to mostly archival information quickly, perhaps in a matter of hours. Further, a jury is more likely to evaluate UStream’s handling of these takedowns in isolation, instead of considering the many hundreds of thousands of other takedowns–many of which are bogus or tendentious–that UStream processed in a reasonable manner. A good lawyer can help tell UStream’s story to the jury, but I think it will be hard for a jury to absorb that message.

Even if UStream wins at trial, this ruling nevertheless provides more evidence that the 512(c) safe harbor is misarchitected. Here, UStream successfully satisfied most of the 512(c) safe harbor and had an impressive 48 hour takedown turnaround time. Yet, it’s been tied up in 5 years of litigation with a costly trial still ahead of it. A safe harbor that takes a half-decade and lots of legal fees to adjudicate isn’t a very useful safe harbor.