Smith was convicted following a jury trial of disorderly conduct and unlawful use of a computerized communication system. His charge stemmed for comments to the local police department’s Facebook page (access the town’s webpage here). 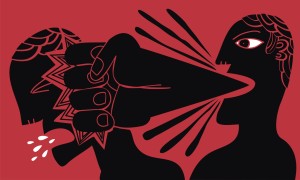 The police department initially posted an update regarding their efforts to track down certain suspects. Users piled on, and as expected unleashed a volley of comments. Smith posted the following:

Fuck the fucking cops they ant shit but fucking racist basturds an fucking all of y’all who is racist[.]

Fuck them nigers policy bitchs wat the you got on us not a darn thing so fuck off dicks[.]

Smith was not in physical proximity to any police officers when he posted the comments.

The key question was whether Smith’s statements were “fighting words” and thus outside Constitutional protection. The state acknowledged that the majority of cases since Chaplinsky had not found fighting words when the speaker and listener aren’t physically proximate (i.e., face-to-face communications). The court agrees with these cases and says that Smith’s statement does not constitute “fighting words.”

The state pointed to the racial epithet in Smith’s statement, and argued that this turned the comments into fighting words, but the court disagrees, and says it’s ambiguous as to whether the epithet referred to the police or someone else. The court says that epithets hurled from a distance don’t cut it. (Interestingly, in Chaplinsky, the Court found that calling someone “God-damned racketeer” and “a damned fascist” would provoke an immediate reaction.)

The state also argued that Smith’s statements tend to incite a breach of the peace, but the court says the state’s argument is too vague about who Smith’s comments would have incited. The court also notes that this argument is properly analyzed under the Brandenburg incitement test, and the state failed to present a fully developed argument that this test is satisfied by Smith’s comments.

In closing, the court says it’s not saying online communications categorically never can be fighting words; just that they didn’t satisfy the test in this case.

It’s telling that Smith was charged with disorderly conduct, and that the offense of “misusing a computer system” is in the same statutory subsection. (Wisconsin’s newly-enacted revenge porn statute is contained in another section.) Disorderly conduct is an offense that is notorious for its constitutional infirmities, so it’s a good bet the crime of “misusing a computer system” is not on the surest Constitutional footing. The “misusing a computer system” statute is terribly drafted, and I wouldn’t be surprised to see some of its subsections thrown out. One of the more egregious examples was the subsection Smith was charged with violating here: “With intent to .. . annoy or offend another person, sends [an email or other message] … and in that message uses any obscene, lewd or profane language …” I’m pretty sure the First Amendment protects annoying speech in an email or online comment even when it contains profane language. If not, we would all be in trouble. Incidentally, this language is similar to the statutory anti-cyberbullying statute that was recently struck down in New York.

The court analyzes the case in terms of whether the speech is unprotected, with the implicit assumption that if it does not fall into one of the existing First Amendment exceptions, then the conviction violates the First Amendment. Even with protected speech, the state can restrict it by satisfying the strict scrutiny test, but either the state didn’t bother to argue it, or the court saw it as a long shot. This illustrates how difficult it is to regulate speech outside the well-recognized First Amendment exceptions; courts are often rigorous about asking whether particular speech truly falls within an exception. Against this backdrop, it will be interesting to see how attempts to ban revenge porn fare. To the extent states argue that courts should recognize a new class of First Amendment-unprotected speech, this probably won’t get very far, so states and legislators must be precise in their attempts to legislate revenge porn in a way that comports with existing First Amendment exceptions. This is a key challenge legislators face in dealing with this speech because when it comes to speech that causes emotional distress, it’s not entirely clear what exactly can be proscribed, and varies depending on the status of the people involved (private vs. public figures), and other variables (newsworthiness vs purely private-interest speech).

This case is similar to State v. Drahota, where the defendant was charged with disturbing the peace for sending politically charged emails. In that case, the court said that hyperbole is expected in the context of political emails and since emails are not face-to-face communications they generally could not satisfy the fighting words test. (Another case in a similar vein is Olson v. Labrie, where the court says posting awkward family photos with mean comments is not actionable as harassment.) The court reaches the right result here, of course. It’s crazy to think that someone commenting from afar on a public issue regarding the conduct of the police could be held criminally liable. (See also rap and hip-hop artists.) But interestingly, the court doesn’t go further and poke holes in the statute. It also holds off on saying that not-in-person comments can never be fighting words.

Facebook and other online comments often do have the capacity to provoke violence, and I wonder whether we’ll see a case where a court says that online comments were fighting words or even incitement. There is certainly factual support in the form of news stories a court can draw on for the proposition that distance does not necessarily dispel the violent urge in response to online comments. (See, e.g., “Woman Travels 200 Miles, With Gun in Hand, to Kill Mean Internet Commenter“.)

An issue lurking in the background (but that does not come up since this is a criminal case against Smith) is whether the police department could have banned Smith from their Facebook page or deleted his Facebook comment because it was offensive. There has been a surprisingly small amount of litigation around government-maintained online spaces and whether deletion of particular comments comports with the First Amendment. I would guess this statement could be deleted on the basis that it contained a racial epithet, but it raises interesting questions and requires the support of a set of consistently applied viewpoint-neutral guidelines rather than an ad-hoc decision by the person maintaining the Facebook page.