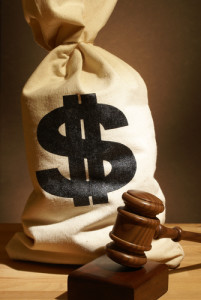 Photo credit: A bag of money and gavel represent many legal expenses // ShutterStock

The SPEECH Act combats libel tourism, the process of trying to enforce an international defamation ruling in the United States if the ruling isn’t consistent with U.S. law. The leading SPEECH Act case is Trout Point Lodge Ltd. v. Handshoe. In that case, Nova Scotia residents got a defamation judgment in Nova Scotia against Handshoe, a Mississippi blogger. When the Nova Scotia plaintiffs tried to enforce the judgment in Mississippi, the case ran into the SPEECH Act roadblock. The Fifth Circuit dismissed the case because the defamation claims couldn’t succeed in the U.S.

If Congress intended courts to consider the nature of published statements when determining whether to award attorney’s fees under the SPEECH Act, this case would likely warrant a departure from its fee-shifting rule. However, Plaintiffs have not presented any evidence that Congress intended to preclude the award of attorney’s fees based on the type of speech at issue. Thus, despite the vulgar nature of Handshoe’s rhetoric, the Court does not find that this case presents exceptional circumstances to warrant a departure from the Act’s mandate that the prevailing party receive a reasonable attorney’s fee.

As a result, Handshoe gets an attorneys’ fee award of $48,000 (reduced about $7,000 from the fee request, a pretty small haircut as those things go). Another reminder of the power of the SPEECH Act.