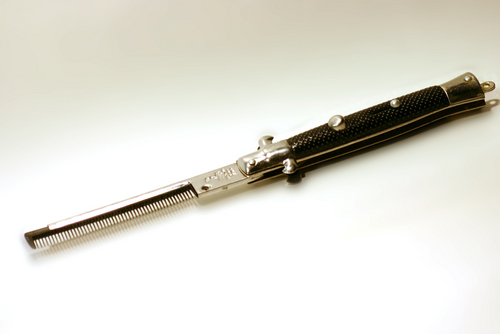 This is a well-conceived and well-executed book about the cheap novelties that were ubiquitously advertised in comic books and other kid-oriented publications up through the 1980s. I remember seeing these ads frequently as a kid. The book shows the advertisement for each item and a photo of what the item actually looked like, and then describes what actually works and what doesn’t. The author also provides a sometimes cryptic bottom-line assessment of whether the item delivered on the ad’s promise or not.

Looking at this collection of items through my modern perspective as an advertising law professor, two things really stood out. First, the ads’ line drawings frequently–and presumably deliberately–omitted a lot of important detail that would affect the purchasing decision. Second, the ads targeted kids. In theory, today we would do a lot more to protect kids from such predatory advertising. Of course, even as a kid in the 1970s I knew that many of these claims probably weren’t true (though I often wished they would be!). In our more modern ad-saturated society, I’d like to think that kids today are growing up to be even savvier evaluators of ad claims. In my household, we’ve frequently discussed how to be skeptical of advertiser claims, and I hope that similar conversations are taking place in other households.

Because so many of the ads were grossly misleading, the ads apparently didn’t contemplate many repeat purchases–a tough business model where you’re constantly needing to recruit a new crop of kid buyers. Of course, there were probably some kids for whom hope springs eternal. Even after a failed purchase, they probably couldn’t resist thinking that the next time would be different. Ultimately, the business relied on information scarcity, i.e., the inability of kid buyers to independently research if the items actually worked. The Internet effectively destroys an advertising model like this. There’s no way the advertiser could get away with vague and inadequately detailed line drawings in an Instagram era, and now there would be dozens of YouTube videos showing how the item worked (or didn’t). Better living through technology!

This book is terrific for any kid who grew up in a middle-class household in the 1970s or earlier. I and many of my peers didn’t have the money to satisfy our curiosity about whether these items worked as advertised. For a little more than the combined price of a hovercraft and spy camera, we can now satisfy that curiosity (albeit a few decades later). I don’t mean to spoil the fun, but the bottom line: most items were a bust but not all of them, which makes for even more interesting reading to discover the items that weren’t total scams.