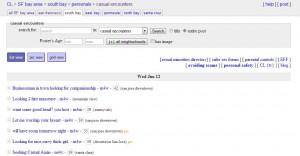 Venson Villapando had, in the words of his psychologist, a “normal” heterosexual interest in “adolescent and adult females.”  In 2009, he logged into Craigslist’s “casual encounters” section and responded to an ad with the headline “looking to get by in hard time-w4m (hb),” where w4m stood for “woman for man” and “hb” stood for “Huntington Beach, California.”  The ad was posted by Detective Alan Caouette of the Huntington Beach Police Department, who pretended to be a 13 year old girl, Jessie Browne, offering to have sex for $100.  After many, many electronic conversations over more than 5 months, Villapando eventually showed up at a Carl’s Jr. parking lot in Huntington Beach apparently thinking he would meet Jessie for prostitution.  Instead, he was arrested.  A jury subsequently convicted him of attempting to have sex with an underage girl.

I’ve seen countless cases involving similar facts.  Most of the time, there is little doubt that the defendant is a sexual predator who intended to victimize a teenager.  In this case, the email exchanges strongly suggest that Villapando was interested in paying for sex and didn’t seem perturbed that Jessie repeatedly claimed to be underage.  (Villapando claims he never believed Jessie was 13).  Still, I think Villapando’s situation was different from the typical sexual predator case in several ways.

Second, Caouette re-approached Villapando numerous times after lengthy breaks in the email exchanges.  Based on the email transcripts in the opinion, I counted at least five times where Caouette restarted the conversation after a week or more of silence from Villapando (where silence possibly signaled disinterest/a lack of intent to follow through).

Third, Jessie Browne’s MySpace profile listed her age as 17, even though she claimed to be 13 in emails.  (Caouette claims Jessie’s MySpace profile listed her age at 13 initially, but everyone seems to agree that it listed her age as 17 prior to Villapando’s fateful trip to Carl’s Jr.).  As I discuss here, I think it’s problematic when a “sting” fictional victim communicates inconsistent ages to a purported predator, because the inconsistencies might legitimately cause the defendant to doubt any age claim by the putative victim.  See also this case, where inconsistent ages contributed to a conviction reversal.

Although any of these reasons potentially would have been sufficient to question Villapando’s conviction, the appellate court focuses on the possibility of police entrapment because Craigslist’s casual encounters forum is supposedly restricted to adults:

Villapando answered the advertisement in the casual encounters section of an adult forum that is limited to users age 18 and over….Nothing in the advertisement revealed that the poster was underage, much less 13 years old.   Instead, the advertisement contained mature content, and the use of terms, such as “w4m,” suggested the poster was at least somewhat experienced in the world of “casual encounters” on Craigslist.   There is no evidence Villapando intended to reach out to a minor when he responded to the advertisement….In the course of seeking consensual sex with a woman in  an adult forum, Villapando was arguably induced by the police to pursue the fictional 13-year-old Jess, as they appealed to Villapando’s sexual fantasies and urged him to continue the exchange of communications and meet for sex.   The police officers involved in this investigation, therefore, arguably engaged in entrapment.

Characterizing Craigslist’s Casual Encounters as an adults-only forum is a little generous; although it obviously deals with adult themes, users aren’t age-authenticated.  Nevertheless, the court reverses the jury’s conviction and orders a new trial where Villapando can raise an entrapment defense.

This is an especially unusual ruling because Villapando’s attorney didn’t raise the defense in the initial trial (it’s unclear if the failure was a tactical choice or a bad oversight).  Often, appellate courts will treat defenses as waived if defendants don’t raise them in the initial trial.  Here, because of the troubling facts of this prosecution, the court gives Villapando a do-over despite this apparent waiver.  A jury could still convict him on the retrial, but he now has another important argument to try to persuade them otherwise.

Defendants in similar underage “stings” routinely think they were entrapped, and I expect this ruling will embolden those defendants to assert the entrapment defense going forward.  Given this court’s treatment that an ad in an adults-only forum, like Craigslist’s casual encounters, implies that the ad’s author is of a legal age, many police sting operations targeting sexual predators have become immediately vulnerable to a strong defense.

I contacted Pat Ford, Villapando’s lawyer on appeal, for comments about the ruling.  He wrote to me:

I think the court was just offended by the police conduct in creating a crime that could lure many regular people in a weak moment.  The police should be investigating crimes, not preying on human weakness and enticing lonely men to have sex with women who contact them online.

I also contacted the California Department of Justice.  They declined comment except to say that they have not decided if they are going to appeal.

UPDATE: A reader alerted me to the 2012 opinion in People v. Aguirre, also involving a similarly overturned conviction involving Jess and Officer Caouette.

Also, I got an email from a reader who thinks many online sex sting defendants have been wrongfully imprisoned in Florida due to entrapment. If you have a referral to a Florida lawyer or law school clinic who might consider investigating this issue more closely, please contact me.