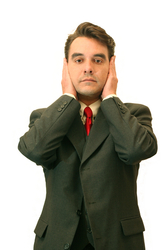 Persistence is a virtue, but stubbornness is a sin. I’m pretty sure Viacom has sinned a lot in its six years of litigation against YouTube. How many things have to go wrong for Viacom before it wakes up and smells the hummus? It’s now lost twice in the district court, it’s created a bunch of precedent unfavorable to its interests, it’s proven that even it can’t figure out which clips it authorized to post on YouTube and which it didn’t, it gave up complaining about YouTube’s behavior after 2008 (making the case entirely backward-looking), it got caught repeatedly astroturfing, and in general it’s looked like a massive jackass. Perhaps its next appeal will finally kill this case as it deserves, though that will single-handedly cause a new downturn in the legal industry as hundreds of lawyers look to find new sugar daddy clients.

Personally, I blame the Second Circuit for unnecessarily extending the case. The Second Circuit’s remand clouded the law and ensured the parties would waste millions of dollars more before YouTube reaches its inevitable victory. On remand, the case went back to Judge Stanton, who ruled quickly on YouTube’s motion for summary judgment (YouTube’s final brief was filed less than 2 months ago). It’s hardly surprising that Judge Stanton ruled for YouTube again–after all, he ruled for YouTube previously, and he shouldn’t have been reversed by the Second Circuit–but he left no doubt that he feels Viacom’s case is bogus.

It doesn’t help Viacom that, in its opposition to YouTube’s summary judgment motion, it admitted:

It has now become clear that neither side possesses the kind of evidence that would allow a clip-by-clip assessment of actual knowledge.

This was a devastating admission by Viacom, though extraordinarily helpful for framing the case. If the safe harbor is available only if the defendant can prove the negative, i.e., that it didn’t have actual knowledge of infringement with respect to each and every user-uploaded file that a copyright owner challenges, then the safe harbor is a nullity. Service providers can’t prove the negative, and trying to do so would lead to lots of socially wasteful efforts by the service provider recording its every move–just in case some future copyright owner decides to sue.

Judge Stanton shreds Viacom’s argument in an incredibly satisfying way. He correctly disparages this argument as “an anachronistic, pre-Digital Millennium Copyright Act (DMCA) concept” because it basically presumes the service provider knows of user-caused infringement unless it can prove otherwise. The judge further mocks Viacom’s “extravagant” request to deny YouTube the DMCA safe harbor because YouTube doesn’t have adequate evidence. The judge says the fact neither party can tender clip-by-clip evidence of actual knowledge:

demonstrates the wisdom of the legislative requirement that it be the owner of the copyright, or his agent, who identifies the infringement by giving the service provider notice…Thus, the burden of showing that YouTube knew or was aware of the specific infringements of the works in suit cannot be shifted to YouTube to disprove. Congress has determined that the burden of identifying what must be taken down is to be on the copyright owner, a determination which has proven practicable in practice.

[Note: check out the videos and other resources from the HTLI’s 15 Year Retrospective of the DMCA in March, with some great discussion on these points. See especially Judge Whyte’s discussion of the pre-DMCA Netcom case.]

The court then turns to Viacom’s willful blindness argument. The Second Circuit’s implication that willful blindness could be relevant to a 512 safe harbor inquiry was a terrible moment in 512 jurisprudence. As I wrote about that opinion:

By adding another category of knowledge but not defining it, this opinion adds substantially to the transaction costs for a [scienter] category that may not exist in the real world. The judges may be happy with themselves that they’ve done a more thorough taxonomizing job, but everyone else is miserable trying to figure out what belongs in that taxonomical node.

knowledge of the prevalence of infringing activity, and welcoming it, does not itself forfeit the safe harbor. To forfeit that, the provider must influence or participate in the infringement.

I don’t really love this standard. What do “influence” or “participation” mean? Those words are not in the 512(c) statute, nor are they normally part of the common law vicarious copyright infringement test (participation is part of contributory infringement, not vicarious). The court gives three examples of what might constitute improper influence or participation, but two examples relate to online marketplaces and not more typical UGC sites. The other example, “prescreening content, rendering extensive advice to users regarding content and editing user content” (from the Wolk case), seemed OK if all three elements are required.

Having left us a little confused about the legal standard, Judge Stanton concludes:

YouTube’s decisions to restrict its monitoring efforts to certain groups of infringing clips, like its decisions “to restrict access to its proprietary search mechanisms,” do not exclude it from the safe harbor, regardless of their motivation. Plaintiffs’ remaining evidence of control goes no than the normal functioning of any service provider, and shows neither participation in, nor coercion of, user infringement activity.

The court does indicate that YouTube may have “steered viewers towards infringing clips” by manually highlighting two clips-in-suit on its home page. However, both clips had authorization. Otherwise:

There is no evidence that YouTube induced its users to submit infringing videos, provided users with detailed instructions about what content to upload or edited their content, prescreened submissions for quality, steered users to infringing videos, or otherwise interacted with infringing users to a point where it might be said to participated in their infringing activity.

What a hash. I’m sure the Second Circuit will make a further hash of this point. If these elements are an “or,” meaning plaintiffs merely need to allege a service provider engaged in any one of these activities, we’re going to have lots of arguments about the right and ability to control prong in the future.

Finally, the judge rejects the syndication issue. The clips hand-selected and delivered to Verizon weren’t at issue in the lawsuit, and YouTube’s other automated syndication arrangements were consistent with the safe harbor.

Having disposed of the four issues remanded by the Second Circuit, the judge granted YouTube’s summary judgment motion.

Overall, the judge reached a solid and defensible result. However, the common law interpretations of the 512 safe harbors are getting messier and more convoluted due to this lawsuit and the parallel suits like UMG v. Veoh. Basically, rather than handing defendants clean wins, the courts keep adding extra factors and layers of analysis to the statutory elements, which jacks up the adjudication costs and reduces predictablity. To me, this opinion exemplifies the weakness of the 512 safe harbor design (see my recent blog post on optimal safe harbor design for more). Although we could point fingers at the judges (especially the Second Circuit for its stupid willful blindness digression), the real blame goes to Congress for making its safe harbor requirements too detailed and giving judges too much room to color between the lines. Judge Stanton’s ruling isn’t a model of judicial reasoning, but it’s pretty good in light of how the courts have scrambled the safe harbors due to Congress’ defective drafting.

* Reply brief of the other appellants

* My comments on the Viacom amicus briefs

* Vobile amicus brief in support of neither party.

* Audible Magic amicus brief in support of neither party.

* APILA amicus brief in support of neither party.