Before Graduated Response, There Was BSA’s “Define the Line” Program. What Happened to It? (Guest Blog Post)

[Eric’s introduction: with the imminent launch of the six strikes/graduated response program from the deceptively named Center for Copyright Information, I thought it might be worthwhile revisiting a prior effort by rightsowners to coopt Internet access providers to do their dirty work. My RA Sruli Yellin discusses:] 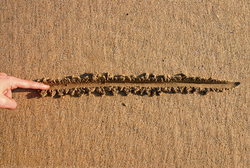 On October 28, 2004, the Business Software Alliance (“BSA”) launched its “Define the Line” (“DTL”) program. According to the press release (which you can find here), the program was designed to educate college students about the evils of pirating software. At the time DTL was launched, only 32% of students reported paying for their software according to a BSA/IPSOS study. BSA/IPSOS has not released an updated study.

So what happened to DTL?

The first of two universities to sign up for DTL was Marquette University. It took seven months for Marquette to sign up, and another month and half for the second school, Dickinson College, to join the ranks. As part of the initiative, the schools agreed to spread the word and distribute anti-piracy materials provided by BSA. The DTL program descriptions were incomplete and garbled, but unlike graduated response, there was never any explicit reference to downgrading or cutting off student Internet use for repeat violations.

Why would universities sign up for a BSA program? The bottom line, of course. According to Prof. Goldman, Marquette received $30M in software from a software company called USG for signing up. (The article he cites, like everything else BSA-related, is no longer online). In the BSA’s ideal world, it seems that every university in the nation would have signed up. But at $30M a pop, there was no chance of financially realizing that dream, nor would the benefits to BSA have outweighed the considerable cost.

As one might expect, a PR campaign with the goal of getting college students to spend money on anything aside from alcohol is doomed before it even starts. Schools involve government authorities in intra-campus issues only when absolutely necessary since all such incidents need to be reported in school statistics. If the IP policing is done in-house – through discipline boards and public safety officers – no stats need to be kept. So, when it came to illegal file-sharing, savvy students knew that private colleges would not want to throw their tuition-paying students to the wolves. At most, students might have to plead with campus IT to get their service back or, worse yet, have their parents make an irate phone call.

DTL was a complete failure as an initiative to educate college students. After the second college signed up, I couldn’t find any more information about the program, and it appears the program gradually withered away. So what lessons does DTL provide with respect to the upcoming graduated response system?

First, it takes a long time to get institutions to implement a rightsowner-instituted anti-piracy campaign. While it took 7 months to get Marquette to sign up, it has been over 18 months since the major Internet access providers announced they would be implementing the graduated response system.

Second, what’s in it for the major telecom companies? Why would they risk alienating their paying customers, and why are they taking such overgenerous positions like exposing users with open wi-fi signals to sanctions? Like with DTL, I imagine the answer is in the bottom line.

There simply has to be a cash/cash equivalent component to the equation. Content owners are likely shouldering much of the cost of rolling out graduated response. In the UK, for instance, content owners have committed to shouldering 75% of the costs of implementing graduated response. Further, perhaps content owners are actually paying the telecom companies off. Though it’s unlikely that content owners could offer enough money to billion-dollar companies that they would risk alienating their users, with companies like Netflix and RedBox changing the landscape of content consumption, one cannot help but think that content owners have promised to sweeten the pot with deals designed to enable the telecom companies to compete. Whether they can buy their way to success this time remains to be seen.

[Photo Credit: Drawing a line in the sand // ShutterStock]