You may have heard–or even used–the phrase “soft IP.” I’m not a fan of it, and I think we should retire the term.

The term “soft IP” is inherently ambiguous. Sometimes, people use “soft IP” to refer to “copyrights and trademarks;” other times, the term is intended to cover all IP other than patents–presumably publicity rights, trade secrets, etc. I especially cringe when I hear students tell me they are looking for a “soft IP” job. Typically, that’s a reliable tipoff that the students don’t know what kind of IP job they want; they just know they don’t want to be (or aren’t eligible to become) a patent prosecutor. That lack of clarity in the student’s mind is rarely an asset to their job search.

I’ve had difficulty tracing the term’s etymology. I searched several online databases looking for early uses and I found published references as far back as 1998, but my vague recollection (corroborated by others) is that the term goes back well before then.

As a term establishing a classification of IP, “soft IP” implies an antonym–presumably, “hard IP.” I don’t hear people use the term “hard IP,” but given that soft IP always excludes patents, presumably patents are part of the antonym.

I can think of a few explanations for a hard/soft distinction among intellectual properties. First, patents often cover physical devices, so they often have a physical tangibility, while copyrights, trademarks and other IPs may be more intangible by comparison (even though patents protect “ideas,” which is as intangible as they come). 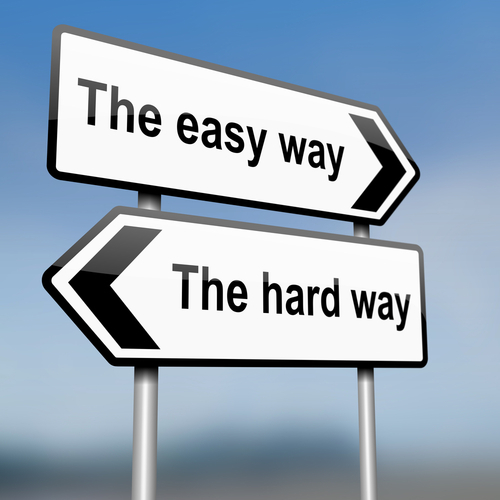 Second, the hard/soft distinction might imply some difference in the degree of the practice’s difficulty, i.e., the perception that patent law, and any associated technology, are complicated and “hard,” while other IPs are relatively easy and “soft” by comparison. People rarely articulate this relative value judgment explicitly, but I’m sure some patent practitioners believe that what they do is more challenging than the work of other IP practitioners; and I’m even more confident (because I’ve seen it repeatedly) that some patent practitioners feel comfortable “dabbling” in other IPs on the grounds that if they can do patents, they are well-qualified to handle other IPs.

It’s true that patent prosecution requires passage of a separate bar exam, which in turn requires a technical background, so in that sense becoming a patent practitioner is “harder” than becoming an IP practitioner generally. Still, there is a certain implicit arrogance in this line of thinking.

Although I concede that patent law has plenty of arcane and baffling rules, I think patent practice is demonstrably not “harder” than other IP practices. I invite any patent practitioner–or, for that matter, any lawyer–who thinks that non-patent IP is “easy” to: walk me through 17 USC 114 (the music streaming provisions); calculate a pre-1976 copyright term duration; tell me what the term “use in commerce” means in trademark law; or walk me through the multitudinous ICANN procedures for objecting to or challenging gTLDs. And while historically the biggest bucks were in patent litigation, we’re seeing big bucks across the IP spectrum, such as Oracle’s $1.3B copyright damages award in the SAP case and Google’s $100M+ defense costs in Viacom v. YouTube. (As I explain to my Internet Law class, $100M of legal fees is like the cost of *twenty* typical patent lawsuits!) And patent cases don’t have a monopoly on hard technological questions; think about the technological sophistication to resolve Oracle v. Google, the Cablevision case or the Goforit case (just to pick three examples off the top of my head). Not only would it be condescending to say or imply that non-patent IP is “easy” or fluffy, I don’t think it’s remotely supportable factually.

A third hard/soft distinction is in the phrase “hard sciences,” although we rarely hear the antonym “soft sciences” (presumably social sciences). Because a technical background is required for patent prosecution, perhaps “hard IP” implicitly cross-references “hard sciences.” The thing is, there are several paths to qualify for the patent bar that don’t require a “hard” science background, so that linkage would be odd.

In conclusion, I see at least three problems with the term “soft IP”:

1) It has at least two different definitions, making the term ambiguous.

2) It establishes an implicit hierarchy between different IP practices, which is potentially condescending and factually unsupportable.

3) It might imply an linkage with “hard sciences” that isn’t necessarily true.

OK, so what should we use instead of the term “soft IP”? I don’t have a great answer. The reality is that the IPs being lumped together under the “soft IP” appellation don’t have enough commonalities to support the linkages–other than that they aren’t patents. So we could use the term “non-patent IP” as the antonym to a patent practice. You probably like the term “non-patent IP” as much as I do (i.e., not much). My only other suggestion is to skip any effort to combine IPs in a single term and instead specify which IPs you are referring to. For example, if you’re using “soft IP” to refer to copyrights and trademarks, just say “copyrights and trademarks.”

[I’m deliberately sidestepping the broader debate about the legitimacy of the term “IP”/”intellectual property,” although I think that topic deserves additional discussion given some people’s intrinsic absolutism towards “property” rights.]

Precise nomenclature is especially crucial for students in their job searches. If you aren’t interested in a patent career, that’s fine; but it’s not a strong sales pitch to tell employers what you’re *not* interested in, and the requirements and expectations of a trademark practice are quite different than a copyright practice (and different still from other IP niche practices). In reality, the best thing students can do is to match their search criteria with the way employers structure the jobs. Few entry-level employers recruit for a “copyright” lawyer; typically, they are looking for a software licensing attorney or an entertainment attorney or an IP litigator knowledgeable in copyright law. My recommendation to students: figure out what employers are looking for, assess how the requirements of the job match against your skills and interests, and proceed accordingly. If you haven’t gotten to the point where you can avoid the term “soft IP,” your job search process probably still needs more cultivation, no matter how much effort you’ve invested in it to date.