In 2009, Facebook ($FB)  nominally enabled user governance by obligating itself to honor user votes before making certain site policy changes.  This experiment in user self-governance was radical and largely unprecedented–especially given the size of Facebook’s userbase, which now would outrank all but China and India in population if it were a country.  Recently, however, Facebook terminated its user-governance experiment.  This post explores two hypotheses for the experiment’s failure and explains why users never wanted Facebook to be a democracy.

Facebook promised to honor users’ votes if users achieved a minimum voter turnout of 30%.  This threshold was too high by a lot–at least 30x too high, by my estimate.

Facebook logically set a high enough threshold to screen out the crazies or pranksters (see, e.g., the 28,000+ people who petitioned the White House to build a Death Star) and avoid letting small minority interest group hijack the site from the minority.  Indeed, in the context of typical U.S. voter turnouts for government elections, 30% would be quite low.

Nevertheless, my rough rule of thumb is that less than 1% of users read any website’s privacy policy.  Users don’t read privacy policies for a variety of reasons: users can’t understand them (they are long, dense and filled with legalese); the agreements aren’t negotiable; users care more about enjoying the website’s functionality than the details governing that enjoyment; and users routinely “free-ride” by relying on more motivated consumers or activists to identify and combat overreaching terms.  In Facebook’s case, I’d add that its website functionality and policies change so rapidly that it’s more than a full-time job to keep up.  As a result, we shouldn’t castigate users for not caring more about Facebook’s policies (see, e.g., this Wired story blaming you for killing Facebook democracy).  The 99%+ of Facebook users who don’t read Facebook’s privacy policies are behaving quite rationally.

But if I’m right that less than 1% of Facebook users have read Facebook’s privacy policy, then a minimum voter turnout of 30% was off-the-charts ridiculous.  There was never any chance of that ever happening, and it was silly for Facebook to put the procedures in place.  It makes me think Facebook always intended user empowerment to be illusory–a type of democracy theater.  Robert Hof explores this aspect further. 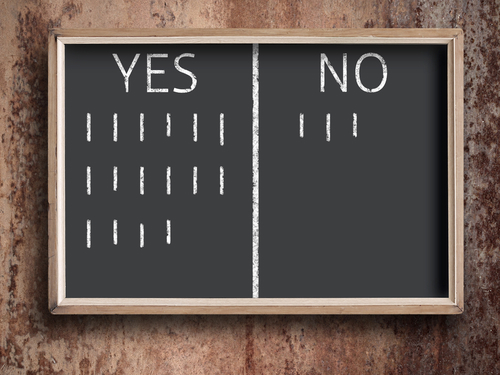 An observation: no major user-generated content (UGC) websites operate as democracies.  Some UGC websites turn over aspects of their operations to trusted community members, but not the general population; and rarely are key policy questions handled on a straight majority-vote election.  Even Wikipedia, perhaps the flagship example of a major community-operated UGC website, isn’t a democracy.  Wikipedia’s operators reserve certain policy decisions for themselves, and community decisions require consensus, not a majority-vote.

Perhaps users don’t want their UGC websites to be democracies.  Instead, I think users typically prefer “managed” website experiences.  The vast majority of users don’t want to make policy decisions about how the website should work; instead, they want websites to read their minds and give them exactly what they want automatically (i.e., the “surprise and delight” maxim of customer relations).  Stated differently, users want UGC benevolent dictatorships, not UGC democracies.

Rather than imposing majority-rule on consumers, UGC websites actually empower users more by enabling users to individually configure their site experiences, such as letting users individually opt-into or opt-out of site policies or functionality.  By letting users choose what policies or functionality they want, users get a more direct payoff from their action than voting on site-wide policies.  Unfortunately, Facebook is notoriously poor about giving users complete power over their configuration choices.  For example, Facebook forced everyone onto Timeline, even users who vocally hated it, and Facebook still doesn’t let users categorically opt-out of being featured in Sponsored Stories.

Admittedly, it’s costly for UGC websites to give more configuration options to users, especially if requires the website to maintain old or duplicative code.  And from users’ standpoint, too many configuration options can become overwhelming (as many users already feel about the multitudinous options Facebook does provide).  Still, it’s helpful to see how website individualization and personalization is more pro-user than UGC democracy.

When users can’t configure their own choices, the next-best option for users isn’t website democracy, it’s competition.  UGC websites will remain most responsive to users’ concerns when competitors are nipping at their heels.  For example, recall how quickly Facebook’s tone changed after Google ($GOOG) rolled out Google+.  Unfortunately, social networking site competition isn’t robust enough to meaningfully punish Facebook for its steady stream of anti-user decisions.  If we could solve that competition problem, Facebook users would get better outcomes than they would from any attempt at user democracy, faux or real.

More: A couple of my related academic papers: Wikipedia’s Labor Squeeze and its Consequences and Online User Account Termination and 47 U.S.C. §230(c)(2).

“Eric, you’re being a little careless in your use of the term “democracy,” I think. A democracy is simply a polity that respects each member’s equal right to participate in formulating policies and rules. Democracy does not (as you imply) mean “majority rule” — majority rule is one of the ways that democracy can be implemented, but it is hardly the only one. To say that Wikipedia is not organized “democratically” because it operates by consensus is bizarre.”

David, that’s a good point, and you’re right that democracy takes various forms and that I principally used the term only for one implementation. Even so, I don’t see Wikipedia as a democracy–at least, not as it actually operates–for the reasons I explain in http://ssrn.com/abstract=1458162. Eric.