Chad Burmeister (no Chad jokes, please…no Karen jokes, either) attended the DC “Stop the Steal” rally on January 6, 2021. One of his LinkedIn contacts, noisily dropped him as a contact, saying:

Normally I’d stay away from political commentary on LinkedIn, but today I’d like to highlight the actions of a former colleague, Chad Burmeister … from Littleton, CO who participated in the seditious takeover of the capitol on Wednesday. I have severed my connection with him here, and encourage all who are connected with him to do the same. It’s disgraceful. If you want to watch the video, it’s part of this ….

This LinkedIn connection severance is a tiny microcosm of how #MAGA and Trump have pitted us against each other and divided our country. Sad! The LinkedIn post linked to a local news segment that featured Chat Burmeister and his selfie initially captioned “First guy to storm the capital [sic] today.” 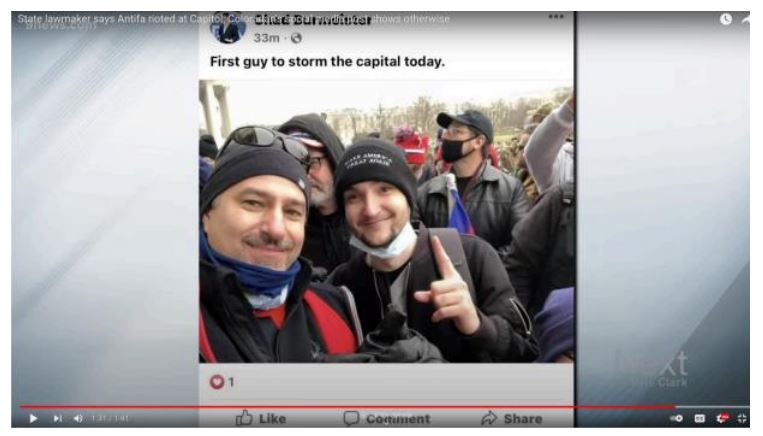 The only issue in dispute is whether Chad Burmeister’s claims had a probability of prevailing. They did not. Even if Chad Burmeister didn’t enter the capitol building, “Saldich’s statement that Plaintiff ‘participated’ in the takeover is substantially true.” The court explains:

The truth, by Plaintiff’s own admission, is that he attended the Stop the Steal Rally and publicly posted a photograph on Facebook with someone who claimed to be the “[f]irst guy to storm the capital [sic] today.” In the days leading up to January 6, he also publicly posted several references to a coming “rebellion” and “storm.” In context, the statement that he “participated” is a reasonable interpretation, whether or not Saldich’s post was technically accurate semantically….

Plaintiff’s case is based on what amounts to an alleged misinterpretation of his own Facebook post: that it was not him who stormed the Capitol. That Plaintiff’s own social media post did not make this entirely clear, or did not explain what he meant by “storm,” is not grounds for a defamation suit. And even if interpreted correctly, his post could still reasonably be understood to mean, at minimum, that Plaintiff was proud to show the public that he was with the “[f]irst guy to storm the [Capitol].”

As for linking to the news report, the Colorado court already dismissed the defamation case, so issue preclusion applies.

Because Saldich won the anti-SLAPP motion, Chad Burmeister will be writing a check to cover Saldich’s legal fees. The price tag of a defamation law education.