[I did an interview for a student research project on emojis as evidence, which I’m sharing here.]

Tell us a little bit about yourself! What do you work with today? What’s your background and how did you get the role that you have today? How did you get into the subject of emojis and law?

I have been writing about and researching Internet Law for over 25 years. In the 1990s, there was a robust academic exploration of the “exceptionalist” question, i.e., what, if anything, makes the Internet unique, special, or different compared to other media? This exceptionalist question remains a part of many Internet Law academic projects today.

In 2016, I encountered an emoticon in a US court opinion and it made me curious about how often that happened. After a quick search, I realized that emoticons and emojis were appearing in court opinions regularly. It got me thinking about the standard Internet Law exceptionalist question: what’s unique, special, or different about emojis as a way of communicating? My research naturally flowed from there.

Though emojis, on one hand, can create a more flexible language – they can, on the other hand, also create misunderstandings – as you mention in your publication “Emojis and the law”. It is therefore of interest to investigate how emojis are used within law. How are these emojis interpreted? And what factors cause emojis to be used, or not used, as evidence in law?

How do/should different people within law, such as pre-trial investigators or lawyers, proceed when dealing with emojis in a law case?

Litigators need to understand that the sender and recipient of emojis may see different depictions of the same symbol. They also need to understand that symbol depictions can change over time. Thus, the #1 consideration is that litigators must ensure that they are seeing both versions that the sender and recipient saw—as they actually saw it at the time the message was communicated.

Litigators also need to consider how they will be able to introduce the emojis into evidence. What foundation do they need to lay about the technological context? How can the litigators prove that they are introducing the right version?

Finally, litigators need to consider what additional evidence they will need to explain the emoji’s meaning. Is the symbol self-explanatory? Will the communicating party need to testify about its meaning? Will it be necessary to obtain expert testimony to explain the emoji’s meaning to the factfinder’s satisfaction? If experts are needed, the litigators should plan early to secure an appropriate expert.

What reason is there for using, or not using, emojis as evidence in law?

It’s not like litigators have a choice. The evidence is the evidence. But litigators can’t ignore any emojis that appear in their evidence. Emojis are an integral part of any conversation in which they appear, so the litigators must ensure they fully understand the communication in total, including the emojis.

Would you say that emojis are considered universal and generally trusted to be used as evidence? Or are they easily overlooked within law?

Some judges have been dismissive of the evidentiary value of emojis. Because they may not see the symbols as an important part of the conversation, judges may not display the emoji symbols in their opinions. Instead, they provide their own textual characterization of the emoji symbol, or they will simply describe them as an emoji symbol without indicating which one. In rare cases, judges omit the emoji altogether without noting the omission. As judges become more familiar with emojis, I expect they will improve how they handle emojis as evidence and in their opinions.

Do you think it is possible for people from completely different backgrounds and cultural contexts to perceive emojis the same way?

Emojis develop slang along multiple lines: language, culture, geography, user age, and more. Emojis are not unique in developing slang. Virtually all forms of human communication, including non-textual/non-verbal expressions, develop slang, so it’s not unusual, surprising, or problematic that emojis develop slang too.

One aspect of emoji slang that is a little different from other types of slang: Emojis develop “platform-specific” meaning where the same emoji symbol might have different meanings on the Apple and Android platforms because the detailed depictions are different. This device-specific slang is another potential blind spot for litigators who aren’t fully fluent in the device or platform where the emoji appears.

How do you think that this subject will evolve in the future? Is there a chance that emojis will become a more regularly used form of evidence in certain law cases? 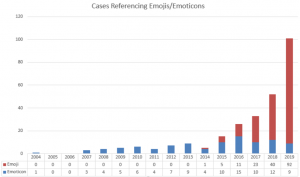 Emojis are showing up in court on an exponential growth rate. This reflects the continued expansion of emoji usage in ordinary online conversations. As emojis are more widely used, they will naturally appear in evidence as well.

The big question we can’t answer today is if emoji usage is a fad or a permanent shift in how we talk with each other. It’s possible that emojis will be eclipsed by some other category of symbols, much like emojis have largely supplanted emoticons. I personally think emojis are here to stay!

We’re also seeing a proliferation in the types of communication options characterized as “emojis.” In particular, we’ve seen an expansion of “animated” emojis, such as animojis, memojis, and AR emojis. I personally think animated emojis are qualitatively different from traditional emojis because they are more like short videos than static graphics. Importantly, animated emojis aren’t likely to vary between what senders and recipients see the way that static emojis can. Instead, animated emojis raise the standard evidentiary issues associated with videos—which are interesting too, but those issues have been well-vetted over the past few decades.